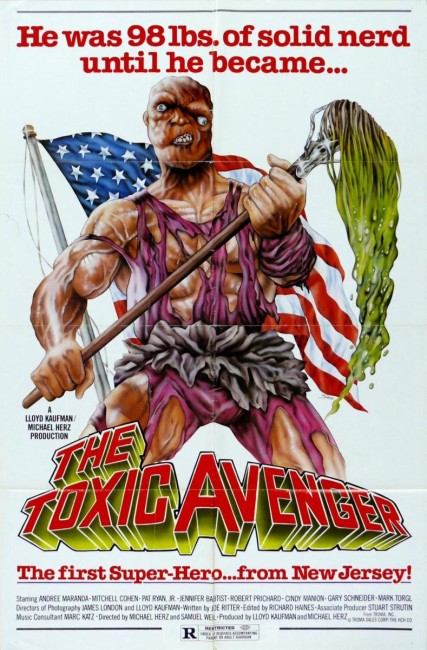 Tromaville, New Jersey is the toxic waste capital of the world. Geekish Melvin Furd is the janitor at the trendy Tromaville Health Club. The very sight of Melvin enrages the psychotic Bozo. Bozo and his girlfriend play a cruel prank on Melvin where she says she is turned on by him and gets him to come to her dressed in a pink tutu, only for everybody to be waiting to taunt him. Humiliated, Melvin jumps out a window, only to land in a vat of toxic waste. He emerges mutated into a huge, brawny and hideous green-skinned mutant. As the Toxic Avenger, he now exacts revenge on his tormentors with violent, gory regard and stands up to crime in the town.

Troma Films emerged in the 1980s where they quickly developed a niche as a company specialising in offensively bad taste films. Along with Class of Nuke ‘Em High (1986) released the same year (this had been made a couple of years earlier but was not widely seen until 1986), The Toxic Avenger was the lynchpin of Troma Films’ success. The Toxic Avenger and Class of Nuke ‘Em High were hits not so much in theatres but rather were some of the first films to find their market amid the relatively new VHS revolution. Troma subsequently made a niche of their own out of the grungiest possible end of the video market, where they seemed to wear their cheapness and sleaze with pride. The Troma name and studio head Lloyd Kaufman (directing here behind the pseudonym of Samuel Weil) have subsequently developed a cult following.

The Toxic Avenger can lay the dubious claim to being the world’s first superhero splatter film. Although, while thematically The Toxic Avenger is a superhero film, its intentions are much lower than that. The film is only intended as a vehicle to push boundaries – it heads into some radical areas of bad taste, while the gore quotient is extreme. The film ranges freely all over the place just to see what areas of offence it can get away with – slapstick humour about the blind; a person who masturbates over pictures of roadkill victims; the beating up of old ladies; a pointless and entirely disconnected sequence where a snake is put down the back of a jazzercize instructor’s leotard and the class follows his contortions suit. In perhaps the most extreme sequence, the four token perverts engage in a game a la Death Race 2000 (1975), collecting points for the types of victims they run down – in one scene, they mow down a boy on a bicycle then reverse to crunch over the body. The gore is extreme – limbs torn off, intestines ripped out, an amazing sequence where Toxie drops a barbell on a weightlifter’s head and so on.

Unlike other splatter films such as The Evil Dead (1981), Re-Animator (1985) and Bad Taste (1988), there is nothing enlivening to this onslaught of bad taste. These films deal in laughter made out of gore, human mutilation and bodily fluids and it is hard to define an exact line as to where bad taste filmmaking actually stops being comedy and merely becomes offensive. One could perhaps say that the aforementioned are cartoon films of the grotesque, whereas The Toxic Avenger is mean-spirited – it is a film made by people who like leper jokes and wife-beating jokes. The difference may well simply be that The Toxic Avenger is not funny – its’ intellectual level is down below even that of a Police Academy film.