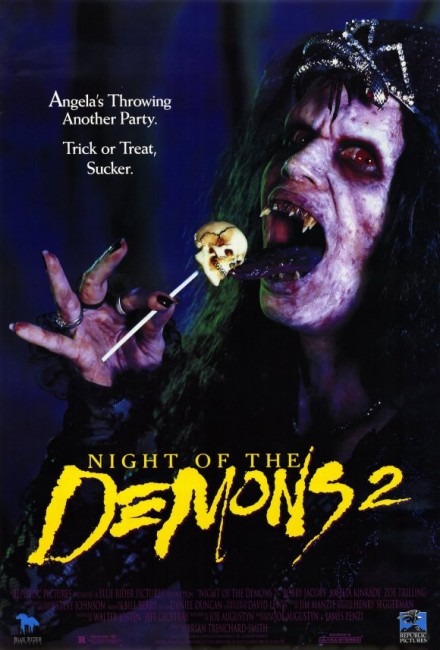 At Saint Rita’s Catholic college, bitchy Shirley Fenerty and several friends are banned from attending the school Halloween party for fooling around with boys so decide to hold their own party up at Hull House. Several years ago, a group of teenagers were killed at Hull House, all except for one girl, Angela, whose body was never found. As the party begins, the demonic Angela appears and starts killing people.

The first Night of the Demons (1987), also known as Halloween Party, was a minor low-budget effort of little distinction that did all its business on the video shelves. Night of the Demons 2 brings back the first film’s star Mimi Kinkaid, now billing herself as Amelia Kinkaid, and features more gory things done with lipstick cases.

The result is possibly one of the most apt examples of all that sucks about the video-era horror film. It is a sequel to a film that nobody remembered for more than five minutes, least of all six years later; its entire raison d’etre is its gory set-pieces; and it takes a decidedly unserious attitude toward itself, layering the horror over with campy Freddy Krueger one-liners. The film has no other point beyond this – it is frankly contemptuous of its audience in its lowest common denominator construction-line approach.

Some of the gore set-pieces are technically imaginative – some good meltdowns; a neat shot when Zoe Trilling’s breasts morph to envelop one character’s hand; and particularly Amelia Kinkaid’s transformation into a giant half-human, half-snake creature at the climax. However, most of the set-pieces are so silly they are beneath disdain – like the scene where Amelia Kinkaid possesses Darin Heames and makes him start barking.

The one moment that Night of the Demons 2 becomes so inane that it achieves a brief surreal glory is the moment where one character dribbles and pots his own head through a basketball hoop. The film has contempt for anything approaching style, intelligence or wit, in fact anything but bizarre human dispatch and self-deriding humour.

The film is unusually heavy in Catholic imagery rather than merely the nebulous Christianity that usually permeates horror films. This is because the producers of the film were all Catholics. They were reportedly quite happy with the film – goodness knows what this says about their religion, although at least one can say, no matter how much it has to debase itself to do so, it is the first film in some years in which the Catholic church is shown to be kicking butt.

Director Brian Trenchard-Smith emerged in the 1970s as part of the Ozploitation fad with films like The Man From Hong Kong (1975). Trenchard-Smith’s earliest genre effort was the dire totalitarian action film Turkey Shoot/Escape 2000 (1983). Trenchard-Smith has made a couple of quite respectable genre films – the children’s film Frog Dreaming/The Quest (1986) and the witty near future satire Dead-End Drive-In (1986). Trenchard-Smith continued his brand of campy unserious horror with Leprechaun 3 (1995) and Leprechaun 4: Leprechaun in Space (1996) and then showed that he was still capable of making bad films even when playing it straight with Megiddo (2001). His other genre films include the astral projection horror Out of the Body (1989), the alien abduction film Official Denial (1994), the meteor collision film Doomsday Rock (1997), Atomic Dog (1998), the haunted house film Sightings: Heartland Ghost (2002), the plague film The Paradise Virus (2003), Tyrannosaurus Azteca/Aztec Rex (2007) and Arctic Blast (2010) about a new Ice Age. Trenchard-Smith has also produced the monster movie Blood Tide (1982), Demonstone (1990), Malibu Shark Attack (2009) and the remake of Turkey Shoot (2014).