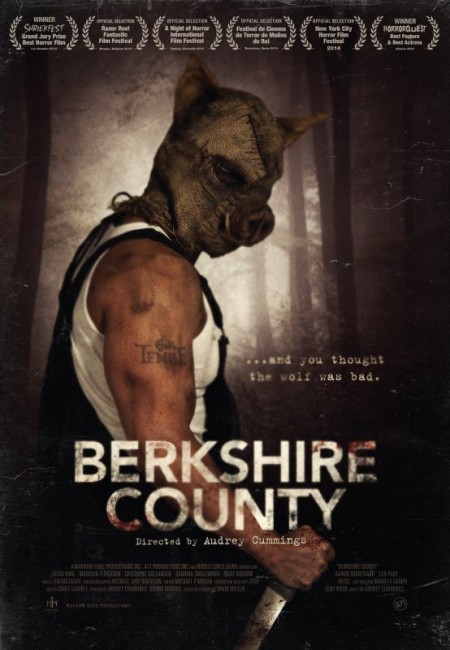 Seventeen year-old Kylie Winters is shamed after a video of her performing oral sex on Marcus is sent out all over social media at school. She is asked to travel to neighbouring Berkshire County to act as babysitter for the Harrison children as their parents go to a Halloween party. Kylie answers a knock at the door and opens it to be greeted by three people wearing pig masks whom she takes to be trick-or-treaters. Instead, the pig-masked people invade the house, coming after Kylie and the two children.

Berkshire County is a Canadian film that represents the directorial debut of Audrey Cummings who had previously made half-a-dozen short films. Cummings shot the film in and around the Toronto area. (Despite the title, there is no Berkshire County in Canada – the nearest is in Massachusetts or else in England, where it is an area that is most famous as the seat of Windsor Castle).

After its introduction and the central character’s predicament, Berkshire County settles in to some very familiar genre patterns. The set-up of the babysitter alone on Halloween night with intruders in the house is a slasher movie standard that goes all the way back to classic films like Halloween (1978) and When a Stranger Calls (1979). In particular, the scenario here has a number of resemblances to Bruce McDonald’s Hellions (2015) that came out not long after.

The two films that one is reminded of in particular here is the remake of When a Stranger Calls (2006), which had babysitter Camilla Belle home alone with two children as she was stalked in and around a lushly designed open home. The other is of The Strangers (2008) that featured a couple’s home being invaded by sinister figures wearing masks – both Berkshire County and The Strangers go out of their way to hide the identities of who is behind the masks (although that is eventually revealed here). The van sinisterly cruising through the countryside brings recollections of the French High Tension (2003).

All of these elements are capably brought together by Audrey Cummings. The film generates an okay tension, although there is the overall feeling that is retreading well-worn genre tropes rather than it is ever doing anything that is original or turning the screws on an audience and putting them on the edge of the seat. The characterisations are genre standard. The twists – that the friendly 911 caller is a trick being played on the heroine to the despatch of the cops sent to investigate the heroine’s call to the not-over-yet twist ending – are all tried and familiar.

One of the pluses of the film is its obtaining the use of a house that comes with some very unique interior designs that look often striking on screen. Another interesting touch is the introductory scenes about the heroine’s humiliation and public shaming after her engagement in a sex act is posted all over social media – this is a very topical issue at the moment, although the disappointment of the film is that after having introduced it, it proves of no further relevance to the situation in the film.

Audrey Cummings subsequently went on to make the labyrinth film Darken (2017) and She Never Died (2019), while she also produced the horror film Anything for Jackson (2020).