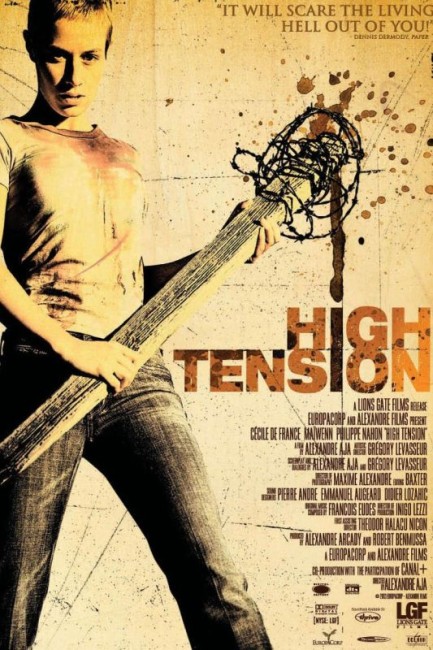 Alexia takes her good friend Marie home to stay at her parents’ country home for the weekend. That night, Marie is witness as a van pulls up and a man emerges and brutally kills all of Alexia’s family. Marie survives by hiding and sneaks into the back of the van as the killer chains Alexia up and takes her away. There she tries to alert the police and get help before Alexia becomes the killer’s next victim.

High Tension certainly sets in with a gore-drenched intensity that puts the wimpier American revivals of the Backwoods Brutality cycle to shame. We are immediately shaken up in our seats in the first few minutes by a scene where we see the killer in a van parked in a field, using a severed head to perform oral sex on himself before tossing the head out the window and driving off. It is director Alexandre Aja announcing his intention to leave the boundaries of all good taste well behind.

Very shortly after this, the film sets in with ferocious regard as we see Maiwenn’s family brutalized and killed in rapid order. Alexandre Aja lets go with some wildly gore-drenched scenes with Oana Pellea lying on the floor still alive with her throat slit in two, axes in the chest and a deranged chainsaw-wielding climax. Aided by a loud and noisy rock score, High Tension has great energy during the brutalisation and chase sequences, which occupy more than three-quarters of the running time. Alexandre Aja does not have a great deal of subtlety, but then High Tension is not a film that needs such.

While an enjoyable Backwoods Brutality film for the majority of its running time, High Tension loses it completely when it comes to its twist ending. Ever since the sleeper success of The Sixth Sense (1999), the fantastic and horror genres have been dominated by a seeming need to throw in a conceptual twist that completely throws audience’s expectations on their head. While the majority of these have worked extremely well, some of these are starting to seem lame and badly contrived – see The Village (2004) and Hide and Seek (2005) for two good examples.

High Tension throws in one of what might be the worst to date. [SPOILERS ALERT]. Here we learn that what we have believed to be the mad chainsaw-wielding killer throughout most of the film is none other than heroine Cecile De France’s split personality identity. This is essentially the same twist that was conducted in Fight Club (1999) – the surprise revelation mid-film that the hero and antagonist are the same person. Fight Club conducted the twist with clever amusement but here it falls into a ludicrous implausibility that only leaves you yelling “cheat” at the blatant manipulation of point-of-view that has gone.

[SPOILERS CONTINUE] To me, if you are going to pull this sort of twist on an audience then you have to retain a plausible consistency when it comes to the points-of-view. Here though we have scenes where the heroine and her split personality are chasing one another – even a scene when the two are engaged in a high-speed chase in two separate vehicles. Not to mention the aforementioned severed head blowjob scene which, while it gives a good bad taste shake-up to its audience early on, is yet another cheat on the point-of-view, especially considering the anatomical impossibility of such a scene given that the killer is in actuality a woman.

[SPOILERS CONTINUE] The other thing that got me about the twist is the nasty implications it seems to say about gay identity. For all that Basic Instinct (1992) accrued controversy and was picketed because of its depiction of a gay female serial killer, High Tension is a film that offers the gay killer at even more of an histrionic extreme, where it seems to say the cause of actions through the entire film, from Cecile De France’s slaughter of Maiwenn’s family, the accrual of collateral damage and abduction of Maiwenn, is all the result of an unfulfilled lesbian crush on De France’s part, triggered by her getting turned on by seeing Maiwenn bathing naked.