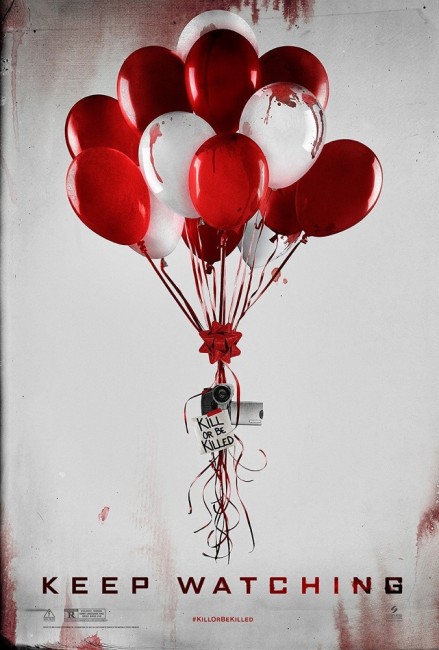 In Oakwood Glen, Jamie Miller resents the fact that her father Adam has moved in with another women Olivia not long after the death of her mother. None of them are aware that mysterious figures have placed hundreds of hidden cameras around the house and watch every single thing they do. That evening, masked figures enter the house and place locked gates across every door and window. They then proceed to terrorise the family while filming everything and broadcasting to a watching darkweb audience.

Keep Watching was a directorial debut for Sean Carter. Prior to this, Carter had worked in the industry as an editor, mostly on short film extras to accompany dvd releases.

Sean Carter makes what is essentially a Found Footage film – one where the mysterious attackers have secreted an absurd number of hidden cameras around the house. We get cameras placed everywhere from behind the glass of the microwave and an alarm clock, between garbage bins, even inside stoner brother Leigh Whannell’s vehicle. This is an idea that was previously conducted in 388 Arletta Avenue (2011) where Nick Stahl was harassed and had his life turned upside down by people spying on everything he did.

Added to this is something of the Home Invasion Thriller concept of The Strangers (2088) where a regular family home is invaded by masked figures who proceed to torture and torment the family. As in other works such as The Den (2013) and Unfriended: Dark Web (2018), this is being done by secretive internet groups filming things for darknet snuff audiences.

For what is a glorified Found Footage film, Sean Carter manages to bring in a reasonable cast of semi well-known names – Bella Thorne, Ioan Gruffudd, Chandler Riggs from tv’s The Walking Dead (2010- ) and director Leigh Whannell best known as the co-writer of Saw (2004) and Insidious (2010) and director of Upgrade (2018) and The Invisible Man (2020) as Ioan Gruffudd’s stoner brother.

I wanted Keep Watching to find the same sublime tension that The Strangers did. Only it doesn’t. Half the film is watching the not-terribly-interesting internal tensions of the household as the observers secretly look on. In the second half, the home invasion begins. However, due to the fact that the film is being shot with static cameras in a regular-sized family home, the action looks cramped. There is no real tension generated, not even much threat from the shadowy figures.