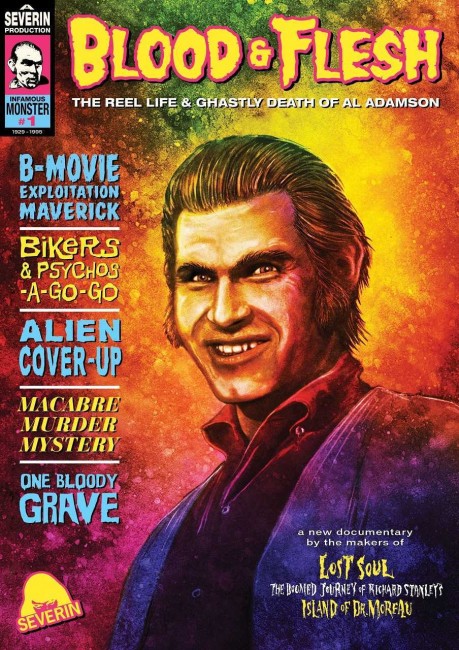 Blood and Flesh: The Reel Life and Ghastly Death of Al Adamson is a documentary about Adamson’s life and films from David Gregory. David Gregory had previously made the horror film Plague Town (2008) and was producer of and directed one of the segments on the multi-director horror anthology The Theatre Bizarre (2011). His far greater body of work has consisted of dozens of Making Of shorts for dvd extras of releases of genre films. Gregory then made a full-length documentary with the fascinating Lost Soul: The Doomed Journey of Richard Stanley’s Island of Dr. Moreau (2014), as well as served as a producer on Richard Stanley’s later return to the director’s chair with Color Out of Space (2019).

Blood and Flesh delves into Adamson’s childhood, his beginnings as a filmmaker and filmmaking process, as well as his personal life and relationships. Adamson seems a fascinating figure whose filmmaking process is filled with cut corners. It is said that he always preferred to shoot in a single take and was annoyed at having to conduct retakes. It is equally said that he liked to do everything as cheaply as possible and would never turn down the offer of someone willing to work for free – one gathers in terms of his eventual murder (taking on a handyman with the offer of lodgings in lieu of wages) that this is something that eventually came back to bite him.

Many of Al Adamson’s films give the impression of being half finished projects or started as one film and ended up with other material added to repackage them for a different genre as Adamson sought to exploit a new fad of the moment. As we learn, what emerged as Blood of Ghastly Horror originally started as a crime film and ended up being changed as Adamson added go-go girls and then scenes with John Carradiine as a mad scientist to exploit go-go fads and then sell it as a horror film. Hell’s Bloody Devils/The Fakers started out as a spy film and was then reshot with additional material to be sold as a biker film when the 60s fad for biker films emerged. Dracula vs Frankenstein started as a regular mad scientist film that had the title bout added to sell it.

The success of the biker film Satan’s Sadists led to the formation of Independent International by Adamson and producer Samuel M. Sherman, which became the opportunity for Adamson to release many of his earlier films that he had not been able to sell to regular distributors. Even then interviewees recount how they encountered Adamson films re-released under different titles to take advantage of trends of the moment.

Gregory digs up an amazing number of still living Adamson associates. These offer fascinating tales from the making of various of Adamson’s films. How Russ Carlton, the producer of Blood of Dracula’s Castle, had sold the film behind Adamson’s back, fled with the print and was then found dead of an apparent suicide in his bath – various of those interviewed speculate this was a murder due to Carlton’s gambling problem and dealings with The Mafia. Of Adamson’s frequent collaborator John Carradine, it is said that he would come onto the set drunk, would read the script and deliver the lines without flubbing a take and then pass back out again. Some of the stories are fairly eye-opening ones, including Satan’s Sadists being shot on location at the notorious Spahn Ranch during the time it was occupied by Charles Manson and The Family and of Manson’s offer of hippie girls to the crew and having to be escorted off set because he was a nuisance.

The most hilarious of the tales is the shooting of Dracula vs Frankenstein. Lon Chaney Jr would bring a thermos of vodka on set and was suffering from cancer of the throat, meaning that his actual lines of dialogue had to be replaced by grunts because he was unable to speak properly. Meanwhile, the aging J. Carrol Naish was in a wheelchair, couldn’t remember his lines and so had to have cue cards held up. Even then, he had thick coke bottle lenses and one glass eye, meaning that there are scenes in the film where he is reading from side-to-side with one eye while his glass eye stands still. Oh and Naish also had a set of metal dentures that can be heard audibly clacking in some scenes. We also get an interview with the film’s Dracula, Zandor Vorkov – in actuality stockbroker Roger Engel – who has been called the screen’s worst Dracula ever. Vorkov/Engel explains the stiffness of his performance due to the lack of breaks in the dialogue he was required to deliver and the fact he was constantly blinking due to the brightness of the lights in his face.

Perhaps the strangest of all the stories are those concerning Adamson’s final unfinished film Beyond the Earth. Sherman pushed Adamson to make a film about UFOs even though Adamson was a sceptic. Adamson dived into researching the material so deeply that he became a believer. Anthony Ferrante hints that Adamson came up against people who knew too much. Stevee Ashlock, Adamson’s star and girlfriend at the time, claims that he encountered alien-human hybrids, while Sherman is cautious about saying too much and states the print of the film has been locked away. There are times you feel that there is a whole other level of crazy to the interviewees and that David Gregory is being too polite to push and examine things further – like where Samuel Sherman talks about trying to mentally contact Adamson when he went missing, while Sherman later casually dismisses newspaper articles referring to his claims to have psychic powers.

Despite the material being more out there, Blood and Flesh is not quite as dropjaw a documentary as Lost Soul was, although is by no means uninteresting. Gregory spends the most effort examining the circumstances of Adamson’s murder by Fred Fulford in 1995. He goes into this in some detail, interviewing the people involved from the investigating detectives to Adamson’s housekeeper and friends and family. He even manages to obtain video footage from the police excavation of the concreted-over burial site and photos of the autopsy. The details of the crime and Fulford’s motivation and actions are gone into in some detail. That Fulford is guilty there is no doubt, although part of you cannot help but think that Adamson ended up being a victim of his own cheapness and constant corner-cutting and taking advantage of people willing to work for free.