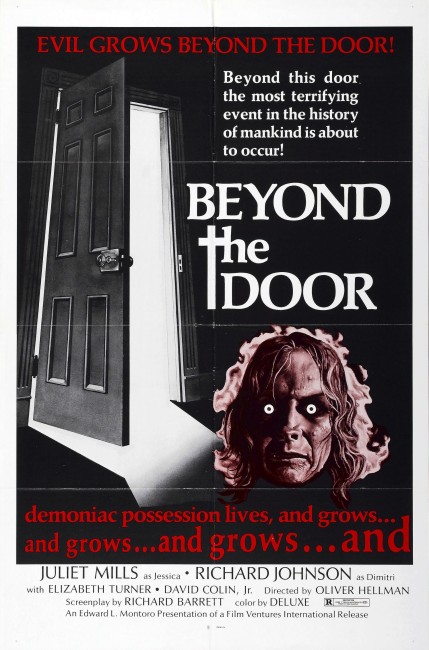 Jessica Barrett lives in San Francisco with her husband Robert and two children. She then announces to Robert that she is pregnant. After examining her, her doctor is puzzled as to how advanced the pregnancy is. This soon begins to affect Jessica’s behaviour, causing her to become increasingly disturbed, to begin talking in a deep voice and conducting indecencies. Her doctor has to tie her to her bed. At the same time, she and Robert are followed by her former lover, the mysterious Dmitri who insists that Jessica is possessed and that he has the answer.

The Exorcist (1973) was one of the biggest box-office sensations of the 1970s, offering a bolt to middle-class sensibilities with its full-on shock effect theatrics and image of a possessed child conducting obscenities. Before The Exorcist, there was also the not-insubstantial success of Roman Polanski’s Rosemary’s Baby (1968) with its story of a housewife pregnant with the Devil’s child.

For the next few years after, filmmakers everywhere were serving up cheap copies of deviltry films featuring possessed and evil children amid similar cheap shock theatrics. Nobody launched onto these more so than the Italian exploitation industry, which during the 1970s/early 80s was determined to shock sensibilities as far as possible as witness their cannibal and zombie films. The Italians produced such other Exorcist copies as The Sexorcist (1974), The Antichrist/The Tempter (1974), The Night Child (1975), The Return of the Exorcist (1975) and Malabimba (1979), even the spoof The Exorcist: Italian Style (1975).

Beyond the Door was the most successful of these Italian Rosemary’s Baby/Exorcist copies, being granted a widespread and profitable US box-office release in 1976, whereas none of these others, with the exception of The Tempter, played outside of grindhouse double-bills. Beyond the Door is also one of the dullest of the Exorcist copies made during this era.

Ovidio G. Assonitis seems to lack anything in the way of directorial style. The pace of the film is torpidly slow. There is one initially mildly atmospheric scene in the kid’s room where their toys start coming to life in the background, with the heads of the dolls turning, a fluffy octopus waggling its tentacles, they developing lit-up eyes and so on – but then the mild subtlety of this is sent into overkill by scenes of drawers popping open and things moving en masse. Other would-be atmosphere generating scenes are a cheat – like where a series of loud booming and decidedly non-human seeming footsteps come towards Juliet Mills only turn out to be her husband Gabriele Lavia.

Ovidio G. Assonitis throws in a mild range of obscenities – the film seems to think it the height of indecency to have two kids who use bad language terms like ‘asshole’ and ‘goddamn’. Assonitis eventually gets to the standard shock theatrics towards the end of the film. He tries to copy The Exorcist‘s famous head-rotating scene and produces the eminently silly image of Juliet Mills lying face down on the bed as her head rotates around backwards to face the camera. There is also the very strange effect of seeing her eyes rotate independent of each other at one point.

In an attempt to go one up on The Exorcist‘s projectile vomiting, Assonitis has Juliet Mills vomiting, then throwing it at people and picking it up and eating it. The climactic moments develop a schlock amusement with Juliet Mills suspended in mid-air, demanding that Richard Johnson deliver her baby while throwing up all over him.

Beyond the Door also reaches a very confusing ending where we are not sure if Richard Johnson is a good guy or a bad guy. Nothing at all is explained about the ten year pact he made to prolong his life. There is a final scene aboard a ferry, which is intercut with David Colin Jr dropping his toy car over the side and Richard Johnson’s car going over a cliff, before Colin turns around with possessed glowing eyes like the dolls back in his room. Quite why the peripheral character of the child is now possessed and how this connects up with his influencing Richard Johnson’s car crash and/or possibly the pact for life extension Johnson was offered is a puzzle.

The production is indifferently directed and shot and gives strong evidence that nobody cared about what was being produced or knew they were making junk. The filmmakers appear to have gone and shot much of the film on location in San Francisco. There is the typically bad dubbing of Italian exploitation films of this era. The film does have the peculiar novelty of being introduced by the voice of The Devil who spends a couple of minutes mocking the audience for being in a rational and disbelieving era.

Mario Bava’s Schock (1977) was billed as sequel Beyond the Door II and is another, much better possession film. Although this does feature David Colin Jr playing a different child, it is otherwise unrelated. Ovidio G. Assonitis also produced a further effort Beyond the Door III (1989) about devil worship, which is unrelated to either of the foregoing titles.