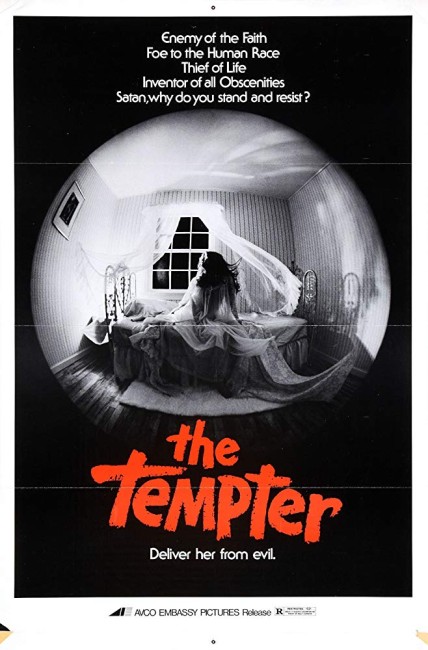 In Rome, Ippolita Oderisi has been wheelchair-ridden since a car crash as a child, something that also killed her mother. She is very attached to her father Massimo and becomes jealous when she finds he has taken up with another woman Greta. Her brother Filippo brings the psychologist Dr Sinbaldi to see her. Under hypnosis, Sinbaldi determines that Ippolita has inherited the burden of sins from her ancestor who was burned as a witch. His attempts to use hypnosis to get Ippolita to walk again succeed in awakening the spirit of her ancestor who was claimed in a satanic sexual ceremony. Ippolita becomes possessed and starts mouthing obscenities. Regaining the use of her legs, she walks out and starts killing. Massimo’s brother, the Catholic bishop Ascanio, comes to the conclusion that the only hope is to conduct an exorcism.

The Exorcist (1973) was a massive box-office success worldwide and its possession and exorcism story ended up being copied by numerous imitators. Nobody latched onto doing so like Italian filmmakers – the 1970s was a decade when Italian exploitation cinema was at its peak churning out numerous cheap copies of every major Hollywood hit. Other Italian Exorcist copies of this era included The Sexorcist (1974), Beyond the Door (1974), The Night Child (1975), The Return of the Exorcist (1975) and Malabimba (1979), even the spoof The Exorcist: Italian Style (1975).

If nothing else, The Antichrist/The Tempter is the best looking of any Exorcist copy. The sets are lavish and exquisitely dressed – hallways with busts of faces carved in relief into the wall (which in one neat effect are later seen with their heads sinisterly turned); the antechambers of the Church where classical paintings cover every available inch of the walls and ceiling; indoor fountains; location shoots in classical piazzas and buildings; cutaways to religious statuary. (Incidentally, the photography is conducted by Aristide Massacessi, better known as Joe D’Amato, a prolific genre director, most notedly with his output of adult films). Alberto de Martino does a fantastic job of shooting Rome and the surrounding countryside for maximum pictorial value.

For a time, I started to be extremely impressed with The Antichrist/The Tempter – it seemed to be an exorcism and possession film conducted with lavishly showoff arty flourish. An arthouse exorcism film, if you like. It starts promisingly, opening on some alarmingly realistic seeming scenes of religious hysteria as a group of people come to see the statue of a saint – they frothing, convulsing, even licking the floor.

On the other hand, after a great set-up, the second half of the film slips into B-movie standard. The means whereby Carla Gravina’s ancestor is reawakened and possesses her involves some highly dubious psychological practices – Umberto Orsini’s psychologist treats a patient for the inherited sins of their ancestors that somehow involves reincarnation, which in any real world psychiatric practice would be regarded as outright pseudo-science.

Alberto De Martino goes the full exploitation avenue – with scenes of Carla Gravina laughing madly while frothing at the mouth with both feet up on the dinner table, levitating paintings and furniture, placing burning hands on her brother’s chest. De Martino delivers the exorcism movie standards with one or two occasional novel twists – like having Carla Gravina moving her own wheelchair without using her arms and then levitating up off it and floating out the window; or when she causes her hands to disappear and reappear in mid-air to strangle the faith healer (Mario Scaccia).

At least, Carla Gravina gives a performance that manages to cover everything from a frail nervousness to seductress and a wonderfully demented range of evil expressions once she becomes possessed. She at least gets full marks for giving the part all she has.

The Antichrist should not be confused with Lars von Trier’s later film Antichrist (2009) about a woman going mad.

Alberto De Martino was a director in the Italian exploitation genre and covered most genres including the peplum and the giallo. His other genre films include:- Medusa Against the Son of Hercules (1962), the Gothic horror The Blancheville Monster (1963), The Triumph of Hercules (1964), the spy film OK Connery/Operation Kid Brother (1967), the giallo The Man with the Icy Eyes (1971), the Antichrist film Holocaust 2000/The Chosen (1977), the superhero film The Pumaman (1980), the psychic film Blood Link (1982), Miami Golem (1985) and Formula for a Murder (1985).