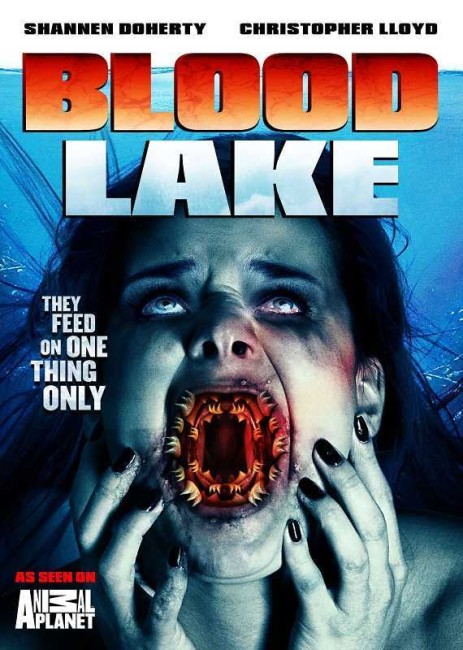 Fish and Wildlife officer Michael Parker has moved to Michigan with his wife Cate and two children. There he has been given the assignment of culling the lamprey population that is overwhelming the lakes. In examining samples, Michael realises that the lampreys have become more vicious than usual – they have killed all the fish in the lake and are now moving on to attack humans. When Mayor Akerman refuses to close the lakes and turn off water supplies, claiming that this would mean a loss of holiday revenue, Michael goes on television to warn people. The mayor has him fired but then the lampreys start emerging from the lakes and water pipes everywhere, even moving up onto land, to attack humanity en masse.

Blood Lake: Attack of the Killer Lampreys is another of the low-budget CGI monster movies produced by The Asylum. The Asylum are mostly known for their mockbusters – films that come out just before a popular big hit and are designed with soundalike titles to fool unsuspecting renters. The Asylum has also produced a vigorous output of B-budget monster movies, most notably in the gonzo killer shark vein with the likes of Mega Shark vs Giant Octopus (2009) and Sharknado (2013) and sequels to either, among others.

Many of the killer shark films produced by The Asylum (and other companies) give the impression they are taking their lead from the remake of Piranha (2010), which planted tongue in cheek and played everything up as absurdly as possible. The surprise, especially given how absurdly The Asylum played Sharknado and especially its sequels, is that Attack of the Killer Lampreys plays everything seriously. Certainly, there is some amusement to be had watching some of the more ridiculous attempts to eliminate lampreys such as Ciara Hanna wielding a weed-whacker or Shannen Doherty in a shower defending herself by cooking them with curling tongs.

Blood Lake: Attack of the Killer Lampreys is strictly average as these kinds of monster movies go. Neither particularly bad, generally competent in all areas, and yet there being nothing about it that stands out from a formulaic handling. Another of the low-budget visual effects companies employed by The Asylum delivers some perfectly acceptable low-budget creature effects.

Most of The Asylum’s films are peopled by actors who hit their peaks a few years earlier and are now drifting through the backwaters of their careers looking for a paycheque. The film toplines Shannen Doherty, once the sensation-causing star of tv’s Beverly Hills 90210 (1990-2000) and to a lesser extent Charmed (1998-2006) who departed both series early on amid rumours of being difficult to work with. Now in her forties, she looks uncomfortable slotting into the role of the mom rather than the love interest. She gives her usual indifferent performance and is pushed off to a backburner role while the actual centre of the show is carried by the lesser billed and not-so-well-known Jason Brooks.

The other intriguing name present is that of Christopher Lloyd who gives the cliche role of the mayor who wants to downplay the menace for the sake of holiday revenue as patented by Murray Hamilton in Jaws (1975) an eccentric airing in the way that only Lloyd can – and moreover, gets a great death scene sitting down on the toilet only to be attacked by a lamprey that jumps up out of the bowl and impales itself in his ass.