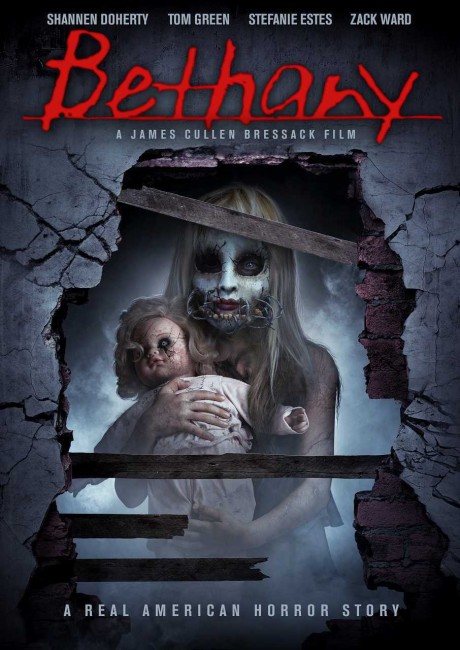 Following the death of her mother, Claire Mason and her husband Aaron move into Claire’s childhood home. Immediately after doing so, Claire is subject to a series of hallucinations, remembering back to her imaginary childhood companion Bethany. These hallucinations threaten her sanity. She slashes her wrists and has to be hospitalised. As Aaron and her psychologist Dr Brown investigate, they find there may be more to Bethany than Claire’s imaginings.

Here Bressack co-writes the film with his lead actor Zack Ward. Ward has appeared in high-profile films such as Resident Evil: Apocalypse (2004) and Transformers (2007), although is probably best remembered as Postal Dude in Uwe Boll’s Postal (2007). Ward also has another career on the other side of the camera and has produced End of the Road (2011), Monster Mutt (2011) and Don’t Blink (2014), as well as writing the scripts for Circus Kane (2017) and The Terror of Hallow’s Eve (2017) and directing Restoration (2016), all low-budget horror works.

Bethany is a film that keeps you guessing about what is actually going on. (Well that’s the view that attributes the most accomplished intentions to it – the less favourable view is that it is simply confused). It starts out seeming as though it is an imaginary companion horror film, along the likes of Hide and Seek (2005) and Daniel Isn’t Real (2019). It then segues into a variant on the Wife Who Keeps Seeing Things While Her Husband Thinks Might Be Going Mad trope. Bressack and Stefanie Estes conduct a fair workout of this theme. Eventually though all of this telescopes down to only being a fairly standard Mad Relative in the Cellar plot thrown together with the lost twin that someone didn’t know about twist. When this becomes apparent, much of the preceding happenings seem either contrived or wilfully misleading.

This is accompanied by some occasionally unnerving effects – like where Stefanie Estes finds that her hand is stuck to long thick black tendrils coming out of her cheek, or where the side of her face starts morphing in a mirror. Someone with long hair appears while Stefanie is in the shower, although that seems an effect that is a little too reminiscent of Japanese horror movies. There is also a not very convincing effect when a Grim Reaper-like figure appears and attacks Tom Green. Nevertheless, Bressack produces a modest range of hallucinations, of Stefanie Estes slitting Zack Ward’s throat, culminating in her slashing her wrist in the kitchen as Zack and Tom Green sit joking at the dinner table.

Tom Green, known for his stand-up comedy and the notorious Freddy Got Fingered (2001), seems miscast as a psychologist. For one, he seems far too friendly for professionalism’s sake. At one point, he makes a home visit and he and Zack Ward sit around drinking and cracking Star Wars jokes – even comparing Ewoks and Tralfamadorians, the aliens from Slaughterhouse Five (1972).

The script does make an attempt to aim for humour, although this sometimes goes awry – as witness lines between Stefanie Estes and Zack Ward: “I’m going to take a shower so I don’t smell like the undead,” “You’re not just a stinky zombie, honey, you’re my stinky zombie.”