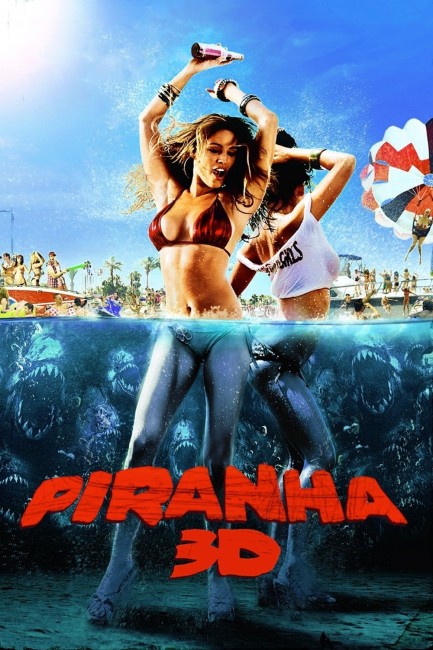 Springbreak college crowds arrive in Lake Victoria, Arizona. Jake Forester, whose mother Julie is the town sheriff, despairs of being stuck for another summer babysitting his brother and sister instead of going out on the lake partying with the others his age, especially Kelly, the object of his desire. Jake’s chance comes when filmmaker Derrick Jones turns up with two models, wanting to shoot nude videos of them on the lake. Derrick’s location scout has fallen through and he offers Jake the job. Jake leaps at the chance, bribing his brother and sister to stay home. To his dismay, Kelly turns up just as they are about to set off and Derrick persuades her to join them. At the same time, Julie has been assigned to accompany a group of scientists come to dive and examine the source of a recent earth tremor at the bottom of the lake. Finding that this has opened up an underwater cave, the scientists are then devoured by a school of piranha as they enter. After a specimen is captured, it is discovered they are dealing with a ferocious breed of prehistoric piranha. Julie races to warn the crowds by the lakeside as the piranha start devouring everything in their path. Meanwhile, the video shoot goes awry as the boat is holed by rocks and left stranded in the middle of the lake, slowly sinking and surrounded by the piranha.

The original Piranha (1978) was a film from Roger Corman’s New World Pictures. Corman and New World specialised in low-budget films that were frequently copies of bigger successes. In this case, Piranha was a quickie copy of the big-budget hit of Steven Spielberg’s Jaws (1975), albeit with the virtue of its tongue planted in its cheek. Piranha proved an unexpected success and served to announce to the world at large the name of director Joe Dante who went onto a successful career through the 1980s and early 90s specialising in playful genre spoofery. Piranha was also the first professional writing credit of John Sayles, who became one of the foremost independent writer-directors in the US. Piranha was then sequelised as the widely ridiculed Piranha II: Flying Killers/Piranha II: The Spawning (1981), which was the directorial debut of no less than James Cameron, although is not a film that Cameron likes to list on his resume. The film was also poorly remade under Roger Corman’s aegis as the cable tv movie Piranha (1995).

Piranha, referred to everywhere as Piranha 3-D (the name listed on its poster), although known simply as Piranha on the opening credits (which this site regards as the official title), was announced several years ago under French director Alexandre Aja. Aja first appeared with the dystopian future film Furia (1999) and then became noticed with the gore-drenched High Tension (2003) and broke through into the US mainstream with the remake of The Hills Have Eyes. These gave Aja wide acclaim within the genre press. This was not fully sustained by Aja’s next film, the disappointing Mirrors (2008), although Aja did produce the worthwhile imprisonment thriller P2 (2007) around the same time. Aja has shot Piranha in the current fad de jour of 3-D. The irony about this is that Piranha was always intended to be a 3-D film well before Avatar (2009) became the latest biggest thing. However, due to its’ timing – ie. coming after everybody has jumped aboard the bandwagon and a mass of fake 3-D films like Clash of the Titans (2010), The Last Airbender (2010) have polluted the water, reducing 3-D’s potential to a ubiquitous gimmick – it seemed only the belated fad jumper.

Alexandre Aja described Piranha 2010 more as a reimagining than a remake of Piranha 1978. This is noticeable when it comes to the plot of the original, which the remake only loosely adheres to. Out has gone the explanations about the piranha being created from a military genetic-engineering experiment; in has come a far less credible explanation about an earthquake having unleashed a horde of prehistoric piranha that have been trapped in a rock cave. (As with Evolution (2001), I have a problem about several millennia of evolution being able to take place inside only a moderate sized cave, which is simply not a big enough biosphere for several hundred generations of species to not only evolve but to house small matters like food sources to feed all of these and so on). The characters have been completely rewritten thus there is no plot about a skip tracer and an alcoholic searching for missing teens. This serves to eliminate the plot that drove most of Piranha 1978, which was largely about a journey down a river in a race to get to the summer camp before the piranha devour everybody there.

Oh, and the summer camp no longer exists either. This brings us to the principal new focus of Piranha 2010 – where the children’s summer camp has been replaced by a Springbreak lake party being held by hordes of college students. This becomes an opportunity for Alexandre Aja to pitch Piranha 2010 fairly and squarely into laps of the frat boy demographic. The film overflows with more bikinied babes, bare breasts and all-round college kid hijinks than we have seen on screen since The Real Cancun (2003). Indeed, this becomes Piranha by way of one of those cable shows that spend each half-an-hour touring beaches and nightclubs watching girls whipping their tops off. Aja even stages, for no other reason that he can, a nude girl-on-girl underwater ballet in 3-D – and for pure pretension’s sake scores it with Delibes’ Lakmé (1883).

For the first half, Piranha 2010 progresses as an average film where you sit wondering if Alexandre Aja is playing the show straight or not. What seems to be missing is the tongue-in-cheek element that Joe Dante gave the original where he packed the film with fishy in-jokes, genre cameos and blackly tongue-in-cheek one-liners. At most, Alexandre Aja opens the film with a cameo from Richard Dreyfuss playing a fisherman who gets sucked down into a whirlpool by the earth tremor – the end credits show that Dreyfuss’s character is named Matt Hooper, the same character that Dreyfuss played in Jaws, the film that served as inspiration for the original Piranha. However, the genre in-reference thing that Piranha 1978 premiered ends about there.

Where Piranha 2010 gains its feet is around the last third of the running time where Alexandre Aja, with the considerable aid of KNB EFX Group, launches into the gore with an enormous degree of enthusiasm. We get amazing set-pieces where a parasailing topless babe is pulled up out of the water with everything below her torso eaten off; another girl whose torso is sliced off diagonally from shoulder to waist by a falling cable; Eli Roth, himself a director who has made substantial inroads in pushing the gore envelope on screen in the 00s, in a cameo as a wet T-shirt contest MC who gets splattered between two boats; the pure nastiness of a scene where a woman gets her hair wound in a boat propeller and is scalped as the boat starts up; a piranha that eats its way out of a woman’s mouth and swims out of the 3D screen at us; copious scenes of bodies with legs and limbs gored to the bone being dragged up out of the water, even one shot where a woman ends up being torn in half between the people carrying her up onto the beach. It is here that Alexandre Aja is clearly at home and pushes the gore element as much as possible while planting tongue perfectly in cheek. About the point that Ving Rhames picks up an outboard motor and wades into the water – looking for all the world like he is attempting to copy Samuel L. Jackson in Snakes on a Plane (2006) – and starts chewing up the piranha en masse, the film has reached a point of pure B-movie enjoyment. A great deal of amusement is also made out of the scene where Jerry O’Connell (who gives the film’s most over-the-top performance) gets his dick chewed off by piranha and a couple of moments later we see it floating out of the screen at us as the piranha fight over it.

(Winner for Best Makeup Effects at this site’s Best of 2010 Awards).