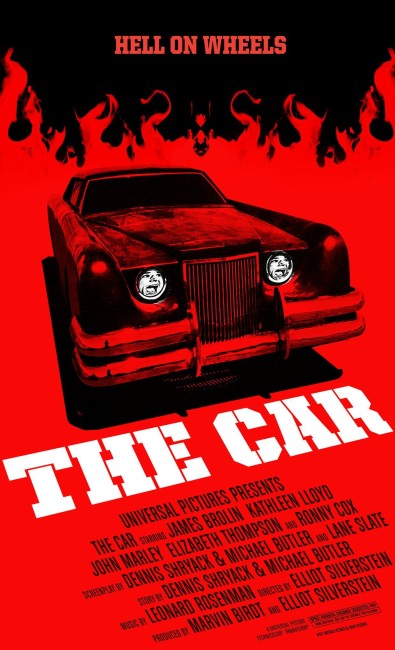 A mysterious black limousine appears in the small Arizona town of Santa Ynez, randomly running people down. Witnesses claim that the car has no driver. As the police attempt to stop it, the car’s eerie feats convince them they are dealing with something supernatural.

The Car appears to have come about when some producer had the idea of conducting a land-based version of Jaws (1975) – or perhaps even more than Jaws, they were thinking of Steven Spielberg’s first film Duel (1971), which had Dennis Weaver pursued by a malevolent truck with a never-seen driver. In a great moment of inspiration, the producer has also decided to throw in some of the other reigning contemporary box-office hit The Exorcist (1973) for good measure to have possessed vehicle prowling around the Utah desert kilning people.

Ridiculed by many people for its sheer stupidity of concept, The Car is actually rather entertaining. The action scenes are both spectacular and suspenseful – like the scene where the car deliberately rolls to smash over the top of the two cop cars and comes out on the other side completely unharmed; or the mano-a-mano confrontations between it and sheriff James Brolin in the wide-open midst of a highway or his own garage, it taunting him by revving and threatening to crush him every time he moves.

The human scenes are badly played – there is some terrible light relief with deputy John Rubinstein joking about fart music and rehearsing pick-up lines, and an awful performance from Henry O’Brien as an Indian. However, the exercise comes with a stripped-back neatness – in any other film, the car would no doubt symbolise all manner of things but Elliot Silverstein and co have no concern with subtext or even explanation of what is going on, the film just ‘is’. After a time, the lack of explanations even seem to have their own inner sense – it seeming perfectly logical that the car should be unable to enter hallowed ground and that it should sit outside a graveyard responding with angry revs and donuts of impotence as Kathleen Lloyd insults it.

The Car enjoyed okay but not runaway box-office success. Surprisingly enough, 42 years later it produced a sequel with The Car: Road to Revenge (2019), featuring a return performance from an aging Ronny Cox.

Director Elliot Silverstein had previously worked as a television director. He made occasional ventures onto the big screen with the likes of Cat Ballou (1965) and A Man Called Horse (1970). His only other genre entry was the horror film Nightmare Honeymoon (1970).