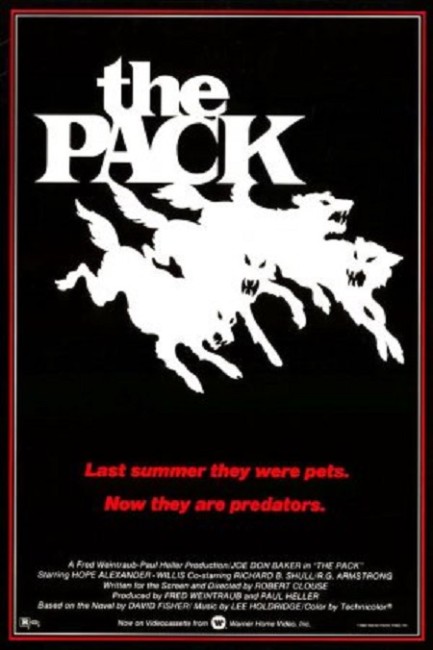 A group of bankers travel to Seal Island on a fishing holiday. There they and several of the locals are besieged by a vicious pack of stray dogs.

The Pack was made by director Robert Clouse. Clouse was most well known as the director of the massively successful Bruce Lee vehicle Enter the Dragon (1973) and would go onto make various other martial arts/action vehicles – Black Belt Jones (1974), A Game of Death (1978), The Big Brawl (1980) and China O’Brien (1990) and sequel, as well as the fine post-holocaust film The Ultimate Warrior (1975). Upon two occasions, Clouse ventured into the Animals Amok genre with The Pack and Deadly Eyes (1982), an adaptation of James Herbert’s novel The Rats (1975).

The Pack was clearly made to exploit the success of the 1970s Nature’s Revenge cycle as created by films like The Birds (1963), Willard (1971), Frogs (1972) and Jaws (1975) and numerous imitators of these. As such, The Pack is a rather neat little film. It is filled with bland, boring characters – especially so in the case of the irritating bubble-headed blonde bimbo played by Sherry Miles – whose conflicts are of interest to nobody. On the plus side, it does feature the great and underrated Joe Don Baker, who gives a worthwhile performance. Certainly, the film takes less time detailing the characters than most and soon strips down to go right for the throat.

Robert Clouse has no style at all and the score is overdone but the rawness of the photography is made to work for the film. When it comes to the scenes where the dogs attack the car, the besiegement of the house and especially the scenes with Joe Don Baker trapped in an attic fighting off dogs with sticks and bedsprings, Clouse conveys an incredible savagery. There is certainly no acting on the part of these dogs, the film gives the impression they really mean it. The Pack is not going to win any awards for brilliant or even undiscovered filmmaking but it certainly racks up some armrest-gouging tension in its 90 odd minutes.