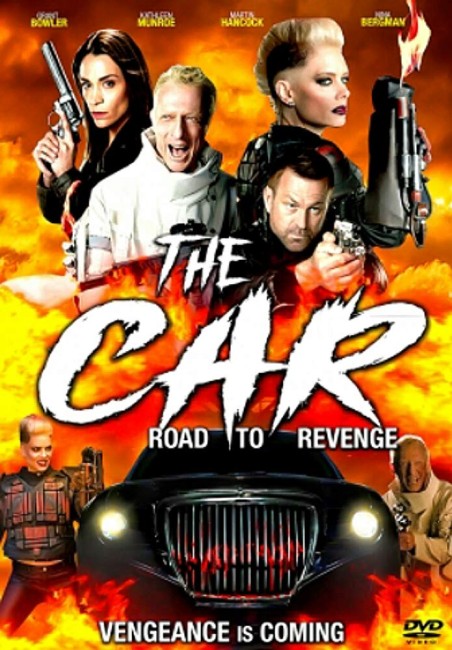 Sometime in the near future. James Caddock is a fiercely determined District Attorney who has the criminals he convicts executed on the spot in the courtroom. Following a bust, Caddock takes possession of a chip containing tech from The Night – a criminal organisation led by Talen who conducts cyborg enhancements on his followers. Caddock has just purchased a new luxury sedan Lazarus 1 and takes his sometimes girlfriend Daria Morris out for dinner. He leaves the chip inside the Lazarus 1. Members of The Night then burst into his office in search of the chip. They throw Caddock out the window, landing on the Lazarus. His death is investigated by Detective Rainer. Soon after, the car comes to life, bursts out of impound and begins tracking down and killing the members of The Night who were responsible for Caddock’s murder. Rainer senses a connection to Daria and the two of them join forces to solve the mystery of the car.

The Car (1977) was one of those forgotten films from 1970s horror. It feels as though someone took Steven Spielberg’s first film Duel (1971) in which a motorist is pursued by an evil truck with a never-seen driver and decided to mash it up with the era’s prevailing fad for possession films that came about following the huge hit of The Exorcist (1973). While modestly enjoyable, it is not regarded as one of the classics of the era and ends up frequently overlooked. The surprise is that 42 years after the original came out, it has produced a sequel.

The Car was an enjoyable and uncomplicated horror film. One of the stranger things about it was that The Car just was – no explanation was offered, although you could see that it was supernatural in nature in that it wouldn’t enter a graveyard. One of the weirder things about The Car: Road to Revenge is that it seems to offer too many explanations – District Attorney Jamie Bamber is thrown out of his office and lands on the car and there is the assumption in The Car’s actions (hunting down those who killed him) that his personality has been transferred into it – the car is even unsubtly named Lazarus 1. On the other hand, he also places a piece of rogue tech created by the gang into the car with the suggestion that it has gained a life of its own. Even further, Ronny Cox (the one holdover from the original film where he played a deputy) turns up in the latter scenes looking well past it at the age of 80 and refits the new car (a modified Chrysler 300 SRT8) with the body of the original car (a modified 1971 Lincoln Continental Mark III) that he just happened to have lurking around his workshop.

The film is directed G.J. Echternkamp who previously made a sequel to another 1970s genre car film with Death Race 2050 (2017). In either film, it feels like Echternkamp has made a knockoff of the original as quickly as possible without any concern for the quality of the product turned out. The two versions of The Car rarely even seem the same film. The setting goes from the original’s smalltown Utah to city sometime in the future (shot on location in Bulgaria). It is a near-fascistic future where criminals are convicted and then killed right there in the courtroom (which feels like something appropriated from Judge Dredd) and the streets are dominated by a rogue organisation that conducts cyborg modifications on their members. However, Echternkamp displays zero interest in fleshing out the background in any more detail than that.

The original The Car is filled with cool scenes where The Car turns up in absurdly improbable places. By contrast with the sequel, Echternkamp makes an action film where The Car does little more than turn up and run people over. None of Echternkamp’s set-ups come anywhere near the original with the exception of one WTF scene where the car turns towards several pursuers and then does a flip and rolls over the top of their vehicles managing to behead two of the pursuers (a cool effect that is a riff on a not dissimilar scene in the 1977 film and is led down by so-so opticals).

One of the more absurdly improbably facets of this film’s action sequences was also pointed out by my viewing companion – Echternkamp has The Car running over all of its victims whereas in reality the Chrysler 300 SRT8 has only a 5.6 inch clearance (the running area between the ground and its undercarriage) and would not be able to drive over people without experiencing a noticeable bump every time it does so.