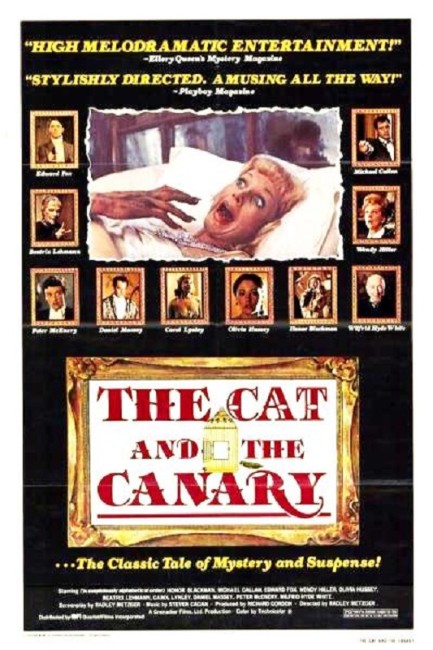 1934. A group of people – the hunter Susan Selsby and her ‘roommate’ Cecily Young; American songwriter Paul Jones; the discredited doctor Harry Blythe; Charlie Wilde, a Wartime flying hero turned movie idol; and the beautiful Annabel West – arrive at Glenncliff Manor. It is the twentieth anniversary of the death of their relative millionaire Cyrus West and they have come for the reading of his will. In a film that he recorded before his death, West names Annabel as his heir – but only if within the next 24 hours she is deemed sane and not to have inherited the hereditary West madness. Shortly after that, Dr Hendricks from the nearby Fairview Asylum breaks into the house to warn them that a dangerous maniac killer known only as The Cat has escaped and may be lurking in the grounds. As they settle in for the night, Annabel realizes that someone, who may be The Cat or one of the other relatives, is stalking her through the house.

This fourth version of the story was mounted in the 1970s. By the point of this version, the story has become a period piece and given a 1930s setting, perhaps as recognition of what a dated genre the Old Dark House comedy/thriller had become by 1978. It would be helpful to remember that 1978 is also the year that the modern classic Halloween (1978) came out – when placed alongside it, The Cat and the Canary 1978 not only seems to be from another era but pitched to almost a completely different generational audience. The influence on this version has clearly been Murder on the Orient Express (1974), which popularised a box-office interest in chamber murder mysteries featuring all-star casts and set circa the 1920s-early 30s period.

The basic story of the play has been left surprisingly intact. There are one or two modern additions – Honor Blackman and Olivia Hussey become ‘roommates’ with an emphasis on the inverted commas and not much ambiguity about what this implies in Blackman’s performance. (There are a few anachronisms – it is unlikely, in that it was not until 1944 that DNA was identified as the basic carrier of genetic material, that a term like genetics would be in common usage by the film’s given date of 1934). This version tends to make the end revelation of what is happening seem more plausible than one remembers it being in the 1927 version. However, by now the genre has become so dated that that the surprise lacks any punch.

Alas, Radley Metzger does little in the way of generating atmosphere. The best scene is the dinner party lorded over by the film of Wilfrid Hyde White lecturing them from twenty years earlier, which is a marvellous piece of scene setting. There is a very nice shot where maid Beatrix Lehmann disappears behind the projection screen and in doing so seamlessly blends into her own image in black-and-white on the screen. Metzger generates occasional creepiness with hands reaching out towards the sleeping Carol Lynley, the various attacks by The Cat or Wendy Hiller being abducted through a secret panel in the background of a shot while Carol Lynley talks oblivious in the foreground. All things considered though, this version of The Cat and the Canary barely even raises one’s pulse rate.

The house where the film has been shot looks like it is a real mansion. In other words, the producers have cut costs by going on location rather than building sets. Alas, a story like The Cat and the Canary depends on threatening shadows, billowing curtains and cobwebs for its creation of atmosphere. Sets are far better at creating this kind of exaggerated realism and the real thing clearly does not provide such here. Certainly, the remake exists an abyss of difference away from the dazzling stylism with which Paul Leni handled the same story in 1927.

Most of the performances are average. As the heroine, Carol Lynley is flat. Standout is the tartly prim Wendy Hiller as the lawyer, who almost seems like a female equivalent of John Gielgud, and Beatrix Lehmann as the maid, whose wrinkles manage to convey an amazingly fluid range of ambiguous expressions.