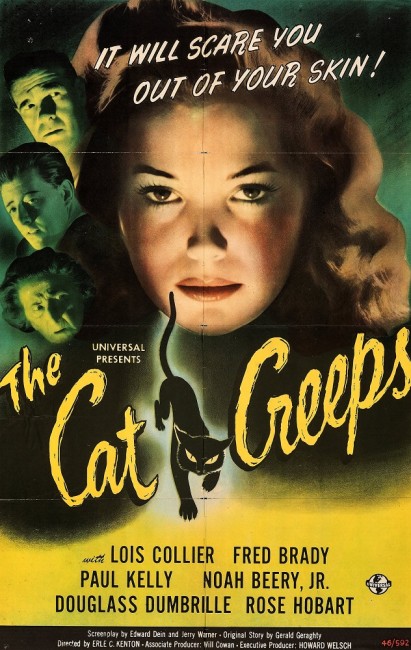 The Morning Chronicle receives a letter from Mrs Cora Williams saying she has evidence that a suicide from several years earlier was a murder. She sends a thousand dollar bill from the stash of money to prove it. The editor sends reporter Terry Nichols and his photographer Pidge Laurie to investigate. Terry is also involved with Gay Elliot, whose father, a senatorial candidate, faces disgrace if his potential implication in the murder comes out. They and other interested parties head out to the island to investigate. There someone attempts and eventually succeeds in killing Mrs Williams. They then meet the mysterious Kyra Goran who says that Mrs Williams’ soul now inhabits her cat and it will direct her to expose the murderer among the group.

The Cat Creeps was the very last horror film of the great age of Universal Horror in the 1930s and 40s – after this, all that Universal produced were comedy riffs on their Famous Monsters, beginning with Abbott and Costello Meet Frankenstein (1948). That would be it until The Creature from the Black Lagoon (1954) but that falls into another whole era of science-fiction based monster movies. The Cat Creeps is often confused with but is unrelated to Universal’s earlier classic Old Dark House film The Cat and the Canary (1927), which underwent a remake with the coming of the sound era a few years later where it was renamed The Cat Creeps (1930), although this version is now a lost film.

Despite being billed as a horror film, The Cat Creeps is far more of a mundane murder mystery. The plot of a party gathered at a mansion and somebody skulking about killing members of the group brings it very much into alignment with the Old Dark House Thriller, a genre that began with the aforementioned The Cat and the Canary and other works of the silent era. That said, by 1946 the Old Dark House genre was on the wane and the few efforts still being made were played as comedies – this is notable as one of the few serious entries of the decade.

The film is clearly being produced on more of an impoverished budget – the island set looks studio bound, the house is unimaginatively designed. Certainly, director Erle C. Kenton aims for some atmosphere with shadows of skulking figures seen on the walls. The most the film ever approach anything fantastical is the character of Kyra who has a cat that she claims is inhabited by the spirit of the murdered woman and will point the way to the killer, although a Rationalised Ending reveals that she is simply a paid actress. East European women who had strange relationships with cats was all the thing in this decade following the success of Cat People (1942).

There is a certain snappy humour to the script in the early scenes, although this drops off once everyone arrives at the island. On the other hand, much of the plotting seems to pass you by – it is never clear, for instance, why the senator has to be on the island and how he will lose his campaign unless things are covered up, while the details of what happened with the suicide/murder and stash of money are not exactly clear.