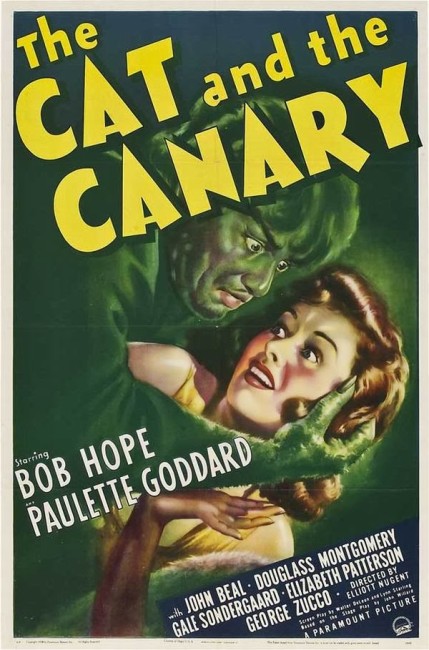 A group of relatives, including Hollywood actor Wally Campbell, gather at a large old mansion in the Louisiana bayous for the reading of the will of the late millionaire Cyrus Norman. In the will, Cyrus leaves everything to his niece Joyce on the stipulation that she is proven not to be insane. As the group prepare to settle in for the night, they are visited by the warder from the local Fairview asylum who warns them that a dangerous maniac known only as The Cat has escaped. Throughout the night, Joyce faces creepy happenings in the house, although cannot be sure if it is the activities of The Cat or of one of the other relatives attempting to kill her so that they can inherit Cyrus’s fortune.

This 1939 version of The Cat and the Canary is considered a Hollywood classic. The film has a considerable lineage. It began as a play The Cat and the Canary (1922) by John Willard that was a popular hit on stage during the 1920s. This in turn was turned into a silent film The Cat and the Canary (1927) where the highly underrated German director Paul Leni brought it to life with an extraordinary visual dynamism. This proved to be a considerable hit and produced a number of imitators – what one calls the Old Dark House genre – with the likes of The Bat (1926), The Gorilla (1927) and The Last Warning (1929), followed by various remakes of these soon into the sound era.

All of these Old Dark House films featured big gloomy old mansions, a line-up of people from different walks of fashionable society, a mad killer that usually went by the name of some animal and an end revelation where what was going on was shown to be a highly contrived plot to drive the heroine mad/obtain an inheritance or treasure and so on. The Cat and the Canary underwent an early sound remake The Cat Creeps (1930), as well as a Spanish-language version at the same time, and a later all-star period remake The Cat and the Canary (1978). The Cat and the Canary was also parodied in Dark and Stormy Night (2009).

The 1939 version is regarded by many as the classic version of the play, although one argues that the 1927 version is infinitely superior from a directorial standpoint. The novelty that this version introduced was the casting of Bob Hope who was at the very beginning of his career. At this point, Hope had only appeared in Big Broadcast of 1938 (1938) the year before but had already been wheeled out in three other comedies in the interim. Hope’s presence served to give The Cat and the Canary a comedy focus that was never there in the original stage play or the other film versions.

The Cat and the Canary 1939 was a success and led to other comedians of the era appearing in similar Old Dark House comedies – the East Side Kids/Bowery Boys made several of these, The Ritz Brothers appeared in a remake of The Gorilla (1939), big band leader Kay Kyser turned up in You’ll Find Out (1940), Abbott and Costello in Hold That Ghost (1941), Laurel and Hardy in A-Haunting We Will Go (1942), Jerry Lewis and Dean Martin in Scared Stiff (1953), while Bob Hope and Paulette Goddard also played essentially the same role in the copycat The Ghost Breakers (1940) the following year.

For a classic film, The Cat and the Canary 1939 has long existed more in reputation than it has ever been seen. For many years, it was not widely available on video and only made a belated appearance on dvd in 2010. This has perhaps served to amplify its merits as a classic. This version serves up the same plot and set-pieces from the 1927 version but the emphasis is now more on comedy than thrills. For example in the 1927 version, the girl who inherits the fortune was the central character of the film. Now the lead becomes Bob Hope, whose character in the original was merely a standard romantic foil for the leading lady.

The film certainly opens well. We get a classic old mansion, which has now been located in the midst of the Louisiana bayous, covered in moss and creepers (albeit a studio backlot version of the swamps), where Bob Hope is rowed there by an ominously inscrutable Indian local. On the other hand, once the film gets everybody inside the house, the atmosphere telescopes down into something crashingly banal. While other Old Dark House films and in particular the 1927 version gave us amazing studio built mansion interiors full of giant drawing rooms with massive windows and shadowy hallways of billowing curtains, the house here seems utterly ordinary.

Director Elliott Nugent, a former actor who directed a number of comedies during this era, most famously Bob Hope’s My Favorite Brunette (1947), gives all impression of being a studio contract director who has been brought in to whip the show out as quickly as possible. He does nothing whatsoever to light the sets or try to find any atmosphere among them. When Nugent does try to spice proceedings up, it is all corny theatric effects – lights mysteriously going off, black cats prowling and their giant illuminated shadows seen in rooms, eyes moving behind a portrait. While Elliott Nugent replicates many of the original’s set-pieces – the lawyer disappearing behind the panel, The Cat’s hand creeping out towards the sleeping heroine’s neck and so on – there is nothing of the amazingly dynamic visuals that Paul Leni gave to the 1927 film. Nugent does get it together at the very end for some moderately atmospheric skulking around in cobweb covered secret passages and a climax in a shed that is clearly channelling Universal horror in its stylised lighting contrasts – the unmasking of The Cat is even conducted with the killer’s face heavily underlit in shadow – but this comes far too late and never approaches anything in the neighbourhood of Paul Leni’s masterful stylism.

Bob Hope wheels out various lines, most of which crack a vague smile but often seem terribly corny today. It is commented, “The spirits are about,” to which he replies, “Can you put some in a glass with a little ice?” He is asked “Do you believe in reincarnation? When dead people come back,” to which Hope comes out with “You mean like Republicans?” Most amusingly, he is asked, “Don’t big, empty house scare you?” “Not me, I used to be in vaudeville.” Anticipating the wildly surreal gags that regularly broke the fourth-wall in the Road movies with Bing Crosby a couple of years later, there is a minor level of meta-fiction with gags about needing a leading lady just as Paulette Goddard turns up, or centred around the cliches that should be expected of a heroine.

Most of the rest of the cast are passable. British-born actor George Zucco gained a prominence after this and soon became regularly cast as a mad scientist in various cheap horror films throughout the 1940s. One standout performance comes from Gale Sondergaard who does the sinister retainer role to perfection.