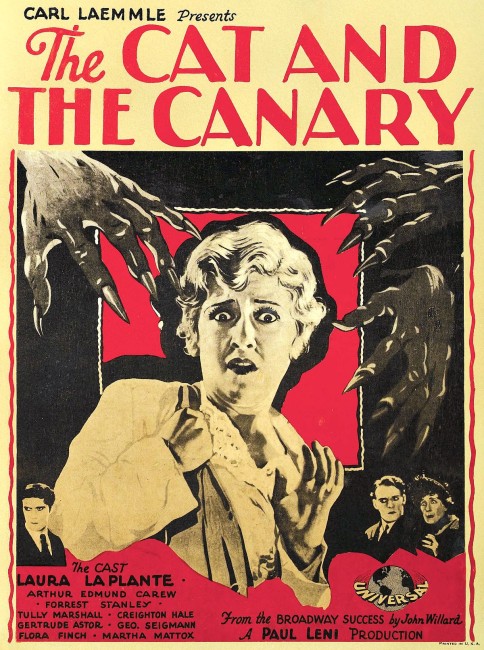 Exactly twenty years after the death of millionaire Cyrus West, a group of relatives arrive at his large, creepy old mansion overlooking The Hudson for the reading of his will upon the stroke of midnight. Because he disliked the greedy ways of his relatives, West has bequeathed everything to the most distant relative bearing the West name – the innocent Annabelle. The only condition attached is that she must be deemed sane in order to inherit. Soon after, the warder from a nearby asylum arrives in pursuit of an escaped madman known as The Cat – so named because he regards his victims in the way a cat does a canary. As the heirs spend the night in the mansion, Annabelle finds herself threatened by both The Cat and the other relatives seeking to eliminate her and gain the inheritance for themselves.

This was the first of four films that have been based on the popular play The Cat and the Canary (1922). During the 1920s, the stage developed its own genre of thriller/comedies that took place in large gloomy old mansions (a subgenre that I have termed the Old Dark House thriller). This genre also included plays such as The Bat (1920), The Last Warning (1922), The Monster (1924) and The Gorilla (1925) among many others, all of which were adapted to film around the arrival of the sound era.

These would usually feature a group of relatives and/or interested parties, fairly much the complement of a standard drawing room whodunnit; an innocent heroine at the forefront of the action; a criminal usually known as some type of animal – The Bat, The Cat, The Gorilla; a gloomy old mansion setting; and an even balance of comedy and thrills. What is notable about this Old Dark House genre is its avowed eschewal of the supernatural – while many seemingly supernatural elements were evoked, the plots went to extraordinary lengths sometimes to reveal everything to be mundane in nature, with often ridiculously contrived twist endings that revealed everything to be a contrived scheme to drive someone around the bend or obtain wealth.

This film version of The Cat and the Canary was directed by Paul Leni. Leni started in the classic era of German silent cinema, having directed the historical portmanteau Waxworks (1924). In the late 1920s, Paul Leni was one of a host of German expatriates who fled to Hollywood and found employ there.

To The Cat and the Canary, Paul Leni brings a full arsenal of visual tricks honed by German silent cinema. Leni’s style is something that lifts The Cat and the Canary up and away from being merely a filmed stage play and gives it an amazing visual dynamism. There is a stunning opening shot that dissolves from the spires of the mansion to the maddened Cyrus West surrounded by giant medicine bottles, with West seemingly trapped in their midst and surrounded by giant cats.

Leni is a dazzling stylist – when Tully Marshall tells Laura La Plante about West being caged like a canary by his greedy relatives, the very shot circles around the table as she is surrounded by the tall ornate chairs, appearing herself like a canary in a cage. When a title card mentions the word ‘ghosts’, the word comes vertically shimmering down the frame. Everyone remembers the brilliant editing juxtapositions such as the cutaway into the interior of the clock to observe the cogs winding up to meet midnight.

Even though The Cat and the Canary has dated in other areas, Paul Leni’s shock effects still contain considerable effect today. He does a great job with the cliche images of the Old Dark House genre – of secret doors opening behind people and clawed hands reaching out to snatch necklaces from sleeping necks. The revelation of The Cat itself with one giant eye and two huge clawed teeth only half-seen under a slouch hat is extremely creepy.

The scares are somewhat diluted by the emphasis on the comedy, which gets more screen time than the horror element does. This is often dated humour – a long scene with Creighton Hale hiding under Flora Finch and Gertrude Astor’s bed could easily have been cut. Nevertheless, some of this is also amusing. Flora Finch’s autocratic and domineering performance is good and Martha Mattox is amusing as the humourless maid. There is also a wonderfully sinister performance from Lucien Littlefield as a psychiatrist who seems even more disturbed than any of his patients.

Director Paul Leni went onto make the Charlie Chan film The Chinese Parrot (1927), the lavish historical horror The Man Who Laughs (1928) about a man with a smile surgically cut into his face, and then returned to the Old Dark House thriller genre with The Last Warning (1929). In 1929, Leni died of blood poisoning and the world was deprived of someone who could have been a major directorial talent. Certainly, in the handful of films he made, Leni demonstrated exceptional style.