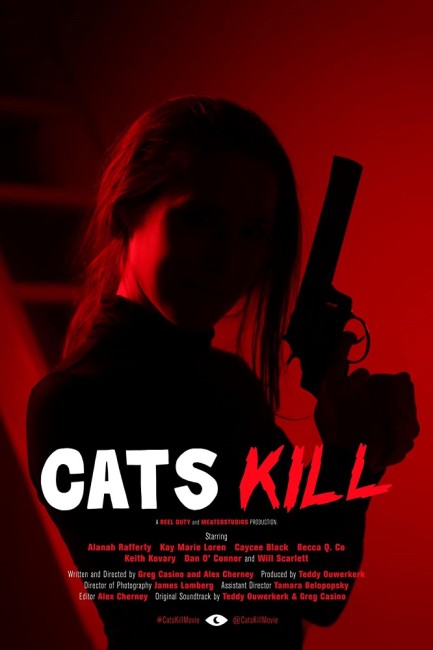 In a small town in the Catskills, Cat is bored and wants her boyfriend Ron to do something wild and dangerous for fun. When he suggests they kill some tourists, she gets excited at the idea. Three girlfriends, Alana, Rikki and Liz, decide to get away from New York City for the weekend and rent a home in the Catskills. At the gas station, they meet Ron and he suggests they get together for some partying. Ron and his friend Steven get drunk and sleep with the girls. In the morning, the girls find Steven having taken an overdose. As Ron goes to get help, Cat is waiting to kill all three of the girls.

Cats Kill was the second film for Greg Casino and Alan Cherney who had previously made The Grecophile (2014) and the subsequent Anybody Home (2020), both non-genre comedies

I admit I was suckered in by the advertising that called Cats Kill a giallo-inspired thriller. The giallo film is a sub-genre of the psycho-thriller that emerged from Italy in the 1960s, specialising in extravagant visuals, a sado-sexual undertow and stylised murder set-pieces. (See Giallo Films for a more detailed listing). There have been a number of giallo homages in recent years and so this description caught my attention enough to want to watch Cats Kill.

I came away disappointed. Calling Cats Kill a giallo is blatantly misleading. Giallo is all stylised effect and wild colour schemes, Cats Kill has none of that. It lacks even the same twisty psycho-thriller plots – all we get is a psycho woman killing others where who she is is known from the opening scene, whereas a giallo would almost certainly hide her identity for an end plot twist.

The premise of the people/person renting a home for a weekend and then being stalked by the owner has a number of similarities to Richard Bates, Jr’s much more blackly comedic Tone Deaf (2019). There have been a number of films of recent years about psychopathic AirBNB hosts with The Rental (2020), Superhost (2021) and Mid-Century (2022). The title has been intended as a pun on the Catskills location and the lead character of Cat on her murder spree.

Cats Kill is okay. It is no more than a regular psycho film made with limited resources – certainly, being low-budget and having limited resources should not be regarded as a crime (as it appears to be in a lot of film board threads). The film does okay with what it has and there is nothing in particular that grabs me as poorly made or deficient. The cast all make a solid efforts to inhabit their roles and the script comes with a number of reasonable twists. In particular, Alanah Rafferty becomes positively arch and owns the show when she emerges into full psycho mode in the latter sections of the film.