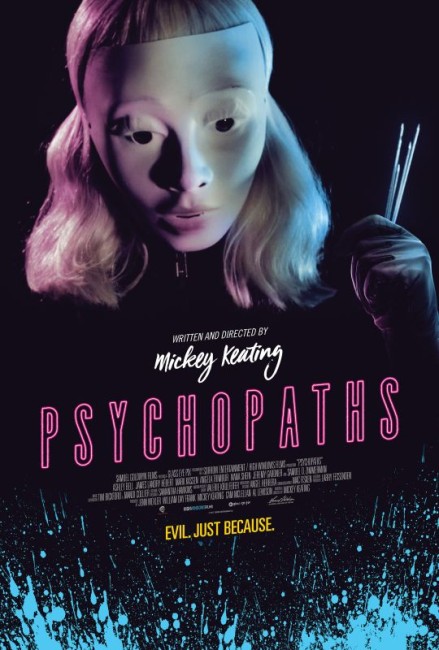 Serial killer Henry Starkweather is sent to the electric chair. Before he goes, Starkweather promises that his execution will unleash a great evil. All across Los Angeles, various people suddenly delight in acts of murder and torture.

Mickey Keating has been a prominent and rising genre name in the last couple of years with several films made in rapid succession under his belt including Ritual (2013), Darling (2015), Pod (2015) and Carnage Park (2016).

Psychopaths feels like a bunch of short films that Keating has made over the years or fragments that he started shooting with a few extra days left over from his other films. These have been threaded together – certainly, with good deal of editing expertise – to act as a series of concurrent narratives. Larry Fessenden, the head of co-production house Glass Eye Pix, appears in the first few scenes as a serial killer going to the electric chair and taunting that his execution will unleash great evil across the country. As we come to see, this is intended as an explain-all for everything that subsequently happens.

Darling was the film that made me pay attention to Mickey Keating. On the other hand, I found Carnage Park uninspired. Thus it is I sit in the middle so far about acclaiming the genius of Mickey Keating. Even among his films, Psychopaths received some very divided reviews. All it feels like is a series of random and disconnected scenes without anything uniting them.

Some of the individual scenes stand out. There is one with Keating regular Ashley Bell as a woman doing her makeup in front of a mirror and rehearsing what she is going to say where from time to time during her monologue her cheery upbeat demeanour cracks into a snarl and she brings a blood-covered hand up to touch her face.

There is another effective story strand where a woman (Angela Trimbur) in a blonde mask attacks and tortures a man before someone knocks at the door and she quickly shoves the man into a box and puts on a pleasant face to appear as a normal mother before a creepily over-friendly cop. But these are interspersed between other parts of a film that never fully comes together as a whole.

Psychopaths should not to be confused with Psychos (2017) that came out a few months earlier.