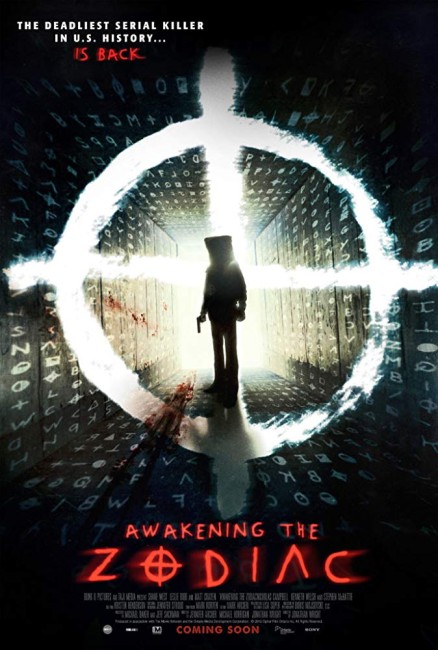 In present-day Virginia, Mick Branson and his wife Zoe live in a trailer where he tries to maintain a not-very-successful lawn mowing business. She is upset when she learns that he has used their rent money to bid at an auction on the contents of a storage locker whose owner has defaulted on payments. Mick’s fellow bidder, the junk store owner Harvey, shows them the old 8mm film footage he has found among the items from the locker. They realise that these show The Zodiac Killer in action. Mick and Zoe set out to trace the owner of the locker, believing that this will lead them to the identity of The Zodiac, while Harvey believes the film reels hold clues to The Zodiac’s unsolved final cypher. Meanwhile, someone comes after them, eliminating all trace of the evidence.

The Zodiac Killer is a true crime case that rocked the Northern California region between 1968 and 1969. A mysterious killer, sometimes wearing a hood, other times not, shot and occasionally stabbed seven people, usually couples in remote areas. Two of the victims survived. What is most famous about the Zodiac case is not so much the killings as the media circus that followed where The Zodiac sent dozens of letters to various newspapers written in a cryptic cypher, taunting the authorities, giving clues to prove that he conducted the killings while claiming responsibility for other crimes. (The exact number of the Zodiac letters is not known as there have been many fakes). The Zodiac case remains unsolved to this day – although a number of people have been nominated as suspects, nothing has ever been conclusively proven. The Zodiac has inspired a number of films on the subject, the most high-profile of which was David Fincher’s Zodiac (2007).

To its credit, Awakening the Zodiac has read up on the basic facts of the Zodiac case for the most part. The recreation of the incident at the start of the film, which becomes part of what we see on the film clip, seems to combine the Lake Herman Road shootings (the first killings in 1968) with the third attack at Lake Berryessa in 1969. (The victims at the latter scene were tied up before being killed, which is not shown here, while the Herman Road scene approximates more what actually happens, except that the killer didn’t wear his distinctive hood at that scene). On the other hand, the trailer (see below) makes the completely untrue claims that The Zodiac was “the most muderous killer in US history” and that he was responsible for “37 victims.”

The biggest plausibility issue with Awakening the Zodiac is its very premise – the Zodiac Killer still alive in the present-day. Michael Mageau, the only ever direct eyewitness to the Zodiac killings, placed the killer’s age as 26-30. Witnesses around the scene of the final canonical attack on taxi driver Paul Stine in 1969 put the suspect’s age at between 28-40 years old. Taking the most liberal of these estimations, this would make The Zodiac aged 26 in 1968. To be alive in 2017, the youngest The Zodiac could possibly be is 75. The median age of the numbers given would make him 85 years old. Stephen McHattie, the actor playing The Zodiac, is 70, which still seems just a little too young. In reality, The Zodiac should be in a geriatric home, on a walking frame and/or suffering Alzheimer’s rather than running about abducting and shooting people.

Unfortunately, Awakening the Zodiac, while it ventures into the highly promising idea of the unmasking of The Zodiac, fails to make the mystery interesting in any way. The idea of finding evidence from The Zodiac in a locker auction is an intriguing hook. However, the film’s playoff of these elements are dull. None of the historical suspects or even the clues The Zodiac sent are debated. At most, the film mentions The Zodiac’s second unsolved cypher. The rest of the film is the tedious stuff of running around being stalked by people.

Jonathan Wright made his directorial debut with the horror film Nostrum (2010) and prior to that had been working as an assistant director since the mid-1990s. He has also made a half-dozen other tv movies, which principally seem to be Yuletide-themed family films for the Christmas season.