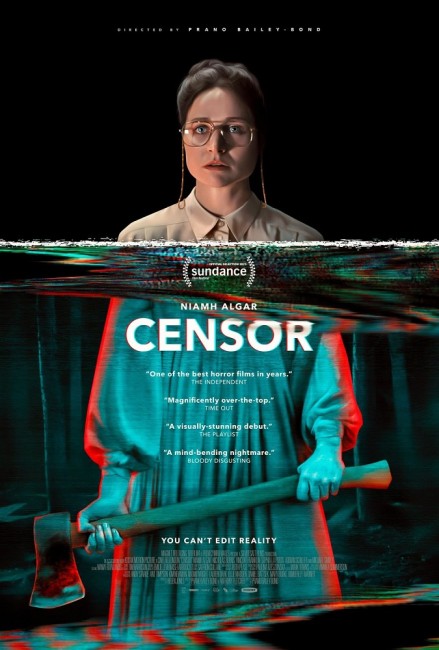 It is the mid-1980s. Enid Baines works for the British Board of Film Censors and is responsible for viewing and recommending cuts to be made to films for video releases. When she was a child, Enid’s sister Nina disappeared under mysterious circumstances and has never been found. Her parents push to have a death certificate issued but Enid is certain that Nina is still alive. Enid is named in the press after a man killed his wife and ate her face and it is claimed that he was inspired by a video that has an identical scene, which Enid and a colleague were responsible for passing uncut. End now views a film Don’t Go in the Church by director Frederick North, which has a scene that uncannily resembles the last moments she remembers being with Nina. Enid goes on a journey into the underground of North’s film productions, certain that her sister is alive.

The Video Nasty is a term that originated in England in 1984. This came out of a moral panic drummed up by Mary Whitehouse, a teacher who had created a campaign to ban violence on Doctor Who (1963-89, 2005- ). This was the era of the newly arrived commercial VHS and film titles were flooding into newly set up video stores. Whitehouse drummed up a climate of hysteria about obscenity being released and so the Video Recording Act was implemented to deal with such. The Video Nasties were a list of 72 works that were banned outright, which included Straw Dogs (1971), Maniac (1980) and Silent Night, Deadly Night (1984), and a whole of other principally Italian zombie and cannibal films. Clips from many of these play out over the opening credits here, including from Frightmare (1974), The Driller Killer (1979) and Nightmares in a Damaged Brain (1981).

Censor is a feature-length debut from Welsh director Pramo Bailey-Bond. She made a handful of short films throughout the 2010s, which received much acclaim and festival play, Bailey-Bond was even named as one of Variety magazine Ten Directors to Watch list for 2021. (For whatever reason, I keep getting Prano Bailey-Bond’s name mixed up in my head in an earworm that keeps calling her Prano Bail Bondsman – I am sorry Prano, no disrespect meant, I think you have a worthy career as a director ahead of you).

Censor is a slow burn film. Prano Bailey-Bond absorbs you in its mood from the opening scenes with the group discussing what they are watching. The film plays out against elements of the era – Margaret Thatcher on tv breaking the miner’s strike of 1984-5; the opening credits playing against clips from the films and of Mary Whitehouse; and a fictional plot where Niamh Algar and a colleague are smeared as part of a media frenzy where a man killed his wife and then ate the face and it is claimed he was inspired by a video they allowed to pass through.

The 1980s setting is muted and the colour levels of the film damped and everything made to look dour. Every so often amid this, Bailey-Bond will throw in scenes shot in reds or pastel pinks and greens and the effect makes for a striking visual contrast. Niamh Algar seems an actress who is caught in an expression of perpetual unhappiness that seems to only progress towards a state of bleaker depression through. Indeed, the only time she gives a smile is in the very end fantasy scenes.

You could easily compare Censor to other works – Niamh Algar’s venture into the filmmaking underground resembles something of Nicolas Cage’s journey through the underworld of 8MM (1999); Niamh’s state of mind and blurring into what happens is not dissimilar to the disturbed states of mind in films like Barton Fink (1991) and Berberian Sound Studio (2012).

That said, Prano Bailey-Bond defies any easy genre labelling and the film does not adhere to expectations. Censor is a film that is more a state of mind that one of overt horrors. Bailey-Bond holds off breaking out into horror movie effect ight until the end apart from a blackly funny accidental murder. Reality, memory and film starts to blur as Niamh Algar becomes wound up in the film shoot – it is never entirely clear how filmmaker Frederick North seemed to tap into her memories of her missing sister or whether this is just coincidence – as Niamh kills the killer on set for real, while the girl she thinks is her sister insists she is not. (Oddly, for a film that is critical of the censorship hysteria of the Video Nasties, this is an ending that does seem to confirm the very same argument that the people pushing censorship argue – that people in disturbed mental states have difficulty telling the difference between what they see on screen and reality).

The film fades out as Niamh picks up a remote – shades of Funny Games (1997) – and replays things to integrate the woman she thinks is her sister into an idealised version of the family life. This cannot help but feel like exactly the same unreally idealised vision of family life that the people who work for the censorship board were trying to preserve, one where disturbingly we see momentary flashes of the violence that has been censored keeping flashing through.

The other executive producer is Kim Newman, who is one of the few other film critics writing in the sf and horror genre that I look up to. Newman writes a column in Empire magazine, maintains a website and has written a book on horror films Nightmare Cinema (1988), as well a series of novels that wind in characters from real-life, fiction and film – most notedly his Anno Dracula alternate history books, which contains appearances from every fictional vampire or vampirised versions of real-life and historical figures.