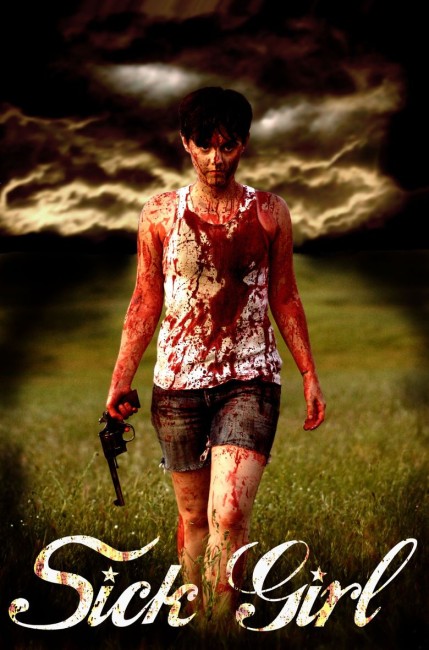 With her parents dead and her brother Rusty now deciding to enlist in the marines, the teenage Izzy is left alone looking after her nine-year-old brother Kevin on the family farm. She gets aboard a convent school bus where she urinates on the nun before being thrown off and picked up by two guys in a car where she slashes the throat of one, before returning to massacre everybody on the bus. She also abducts bullies that threaten Kevin and forces one of them to kill the other two. She then makes the third bully a prisoner along with several others that she keeps captive and tortures in the barn.

Sick Girl was a film that caused some controversy when it came out. It has been banned in several countries, including the normally quite liberal New Zealand. It was a directorial debut for writer-director Eben McGarr who subsequently went onto make the Famous Monsters homage House of the Wolf Man (2009), the fandom documentary The Con (2011) and the horror film Hannukah (2013). The film was promoted with the claim that it was based on a true story but this is untrue.

Sick Girl kicks in with considerable outrage from its opening moments where we see Leslie Andrews boarding a convent school bus, picking a fight with the nun and pinning her down and urinating on her; being thrown off the bus, hitching a ride with two guys and slitting the throat of one of them; catching up with the bus in the guys’ car, shooting everybody aboard and then grabbing one of the survivors and pouring gasoline down her throat and it is implied setting her alight.

Eben McGarr has figured that continuing to pile on outrage is going to propel the film past the (lack of) resources he has in the budget department. In the next few scenes, we see Leslie Andrews trying to kiss her older brother (Chris W. King). The most disturbing scenes come as she abducts the three bullies (Justin Marco, Peter Parlida Jr and Jan Villalobos) that torment her younger brother (Charlie Trepany) and takes them to a lakeside where she forces one of the boys to drown one of his friends then stab the other. The remaining bully (Villalobos) is made a prisoner in the barn where she places a sack over his head and releases the science teacher’s rat that they were earlier seen torturing into the bag.

The most outrageous scene is where we see Leslie Andrews with her prisoners in the barn, where she bloodily cuts the dick off the guy (Graham Denman). We have seen dick severings in various Italian cannibal films such as Cannibal Holocaust (1979) and Cannibal Ferox (1981) but what Eben McGarr proceeds to do next goes into total disbelief where we Leslie Andrews nailing the severed dick to a board to create a makeshift strap-on with which she proceeds to violate Katharine Macanufo until the dick comes off inside Macanufo.

Sick Girl emerges as a work of social horror in the same vein as a film like River’s Edge (1987), Fun (1994), My Name is A By Anonymous (2011) and the films of Larry Clark – Kids (1995), Bully (2001) and Ken Park (2002) – that explore the potential of contemporary youth gone badly out of control. You are not entirely sure what message that Eben McGarr is trying to make with the film. Mostly it seems he has made a film that has determined to push boundaries and outrage an audience. At which you cannot deny he does achieve some effect.