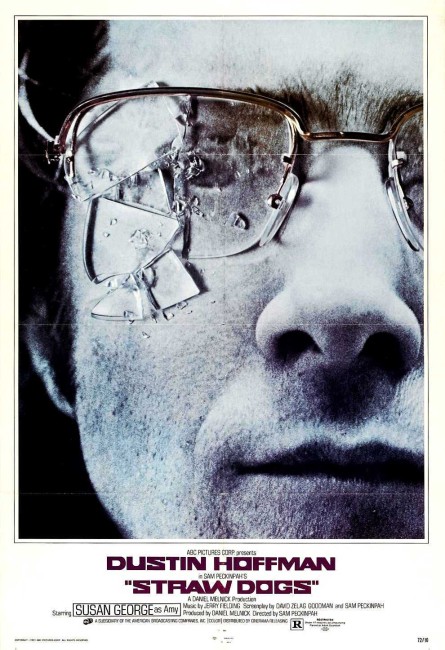 David Sumner, an American mathematician studying stellar phenomena, moves into a farmhouse in a small village in Cornwall with his local wife Amy. However, their more sophisticated ways and Amy’s desirability raises the resentment of the local workmen renovating the house. The locals retort by slaughtering the Sumner’s cat and hanging it in the closet and then luring David away on a fake duck hunt while they sneak back and rape Amy. When David gives refuge to a local man being hunted for killing a woman, the locals surround and begin an assault on the farmhouse. In order to defend himself, David must abandon all civilized pretensions.

Straw Dogs is a seminal document in the 1970s subgenre that one has termed the Backwoods Brutality cycle. It set up a basic template that was quickly copied and expanded by films such as The Last House on the Left (1972), Deliverance (1972), The Texas Chain Saw Massacre (1974), Death Weekend/The House By the Lake (1976), Fight For Your Life (1977), The Hills Have Eyes (1977) and Day of the Woman/I Spit On Your Grave (1978) among others – that of a city bred man or group of people defending themselves against backwoods yokels that develops into war between the civilized and uncivilized wherein city people must descend into barbarism in order to survive. This dialectic quickly became a cliche but Straw Dogs developed it as a more substantial subtext than its many successors. (For more detail of the genre see Backwoods Brutality Films).

The film offers an almost caricatured version of smalltown yokels (how the Cornish must have hated their portrait in this film!). Dustin Hoffman’s Americanness is made into something that becomes an affront to them. His greater sophistication, his beautiful wife, the snappy sports car in which he heedlessly nearly runs people over is seen as something unattainably desirable by the locals. Even his academic subject matter is seen as something far too sophisticated for the local vicar’s crude ways – in one scene, Dustin Hoffman sits at home airily making digs at organised religion unaware of the vicar simmering under the collar.

Most importantly, Susan George, playing the local girl who has been won over to Dustin Hoffman’s Americanness, is seen as something that taunts and stirs up the men’s primal urges by her very desirability and unattainability. Director Sam Peckinpah purposely emphasises her sexual desirability – in the opening shots, he focuses in closeup on her nipples poking through her T-shirt as she walks through the street and later zooms down from the point-of-view of the workmen on her panties as her mini-skirt rides up when she gets out of the sportscar. Later she parades topless in the bathroom in plain sight of the workmen seemingly as an open taunt.

We get the clear picture that this is not, as in later entries in the Backwoods Brutality cycle, hillbillies and yokels attacking city folk because country folk are closer to barbarism by virtue of their distance from civilisation, but that the city folk’s casual sophistication and wanton freeness has stirred up something primal inside the crudely unsophisticated locals, which they attack because it taunts and shows up their lack of refinement.

Sam Peckinpah, in films like The Wild Bunch (1969), Pat Garrett and Billy the Kid (1973) and the intensely weird Bring Me the Head of Alfredo Garcia (1974), which is almost a horror film, was akin to a cinematic equivalent of Ernest Hemingway. Peckinpah concerned himself with men’s men and masculine rituals. In some ways, Straw Dogs is the most raw of Sam Peckinpah’s films. Dustin Hoffman is cast as an intellectual who must undergo rites to strip away his civilised pretensions so that he can discover his manhood. Much is symbolically made of the home he must defend.

Unlike latter entries in the Backwoods Brutality cycle, such as Deliverance, The Texas Chain Saw Massacre and The Hills Have Eyes, where the yokels were cast as simply crazy and lacking in any need for accompanying motivation – they are seen as brutish and beyond all understanding of civilization – Sam Peckinpah makes the case here seem much more morally ambiguous.

The first half of Straw Dogs seems to be heading down the standard path that these films take but the second half when the locals’ attack is motivated by Dustin Hoffman giving shelter to a wanted killer. This has the effect of muting the assault morally. It gives the locals righteous motivation and it makes Dustin Hoffman, the besieged hero of the piece, into someone operating under misguided motives.

The ending with Dustin Hoffman having vanquished his enemies (in a brutal and well-sustained battle) and driving the killer off to safety is designed to highlight the ambiguity of sides. Nobody, Peckinpah says, is right. His depiction of an intellectual stripped to a primal man and forced to fight is well achieved, but the confusion over sides weakens Straw Dogs – one cannot help but think the film would have been better off without such a blurring of sides.

Straw Dogs (2011) was a highly disappointing remake with James Marsden cast in the Dustin Hoffman role and Kate Bosworth in the Susan George part of the wife and the locale transferred to a redneck town in the Southern US. Also of note is the Danish thriller Deliver Us From Evil (2009), which borrows substantially from the plot of Straw Dogs in a savage and biting parable about racism.