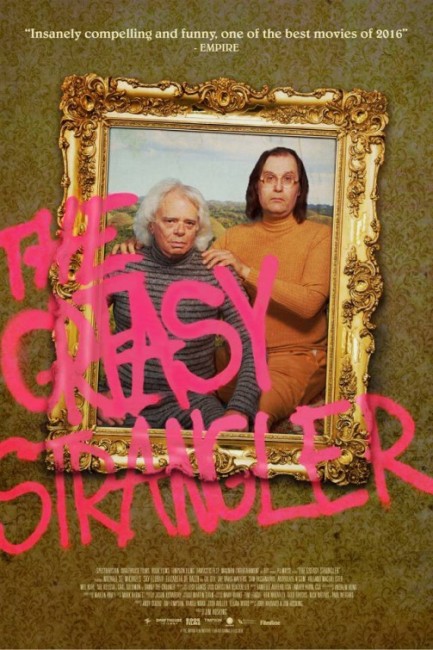 Big Brayden lives with his father Big Ronnie. Big Ronnie likes to eat everything covered in mountains of grease. Unknown to Big Brayden, Ronnie is also a wanted killer known as The Greasy Strangler who covers his entire body in grease and goes out to kill. The two of them operate a guide business showing tourists places of note in disco history. Big Brayden then becomes involved with Janet, one of their clients. Big Ronnie is not happy. He insists on taking Janet out himself and then seducing her and making her into his girlfriend. Hurt, Big Brayden then begins to find increasing evidence that his father is The Greasy Strangler.

The Greasy Strangler is a debut feature for Jim Hosking, a British director who previously made the G is for Granddad segment of ABCs of Death 2 (2014). It comes from an impressive line-up of talent behind the camera, any of whom would be solid enough reason alone to watch a film. It is co-production with Elijah Wood’s Spectrevision company, which have been behind other genre efforts such as Toad Road (2012), Cooties (2014), A Girl Walks Home Alone at Night (2014), Open Windows (2014), The Boy (2015), Mandy (2018), Color Out of Space (2019) and Daniel Isn’t Real (2019).

It is also co-produced by Ant Timpson, the New Zealand producer behind the ABCs of Death films and other works such as Housebound (2014), Deathgasm (2015), Turbo Kid (2015) and The Field Guide to Evil (2018), plus director of Come to Daddy (2019). The third co-producing partner is Ben Wheatley, director of acclaimed works like Kill List (2011) and High-Rise (2015), and his Rook Films production company.

Almost certainly the universal reaction to The Greasy Strangler is likely to be “WHAT THE $%@^* AM I WATCHING?” It is a film so unclassifiable, so eccentrically located inside its own universe and so far removed from the sensibilities of your average film that it has instant cult classic and midnight favourite written all over it from the moment it opens.

The characters have a weirdness that hails in from another planet. Case in point being father and son Michael St Michaels and Sky Elobar who run a disco tour of the city while dressed in a matching set of blinding pink tops and shorts. Or else St Michaels who goes out disco dancing in an outfit that looks as though it was sewn from grandma’s curtains with a transparent crotch that leaves his dick visible.

The characters are deliberately portrayed with a less than glamorous physicality that we usually don’t get to see in movies. In the opening scenes alone we see Sky Elobar as a middle-aging man with a potbelly walking about in his underwear and perhaps the worst combover ever seen up on screen as Michael St Michaels (an actor in his seventies) wilfully flashes his butt to Elobar. Both men are frequently seen naked – St Michaels with a giant prosthetic dick that nearly comes down to his knees, Elobar with a tiny one about the size of the first joint on your finger (where he is even seen engaged in phone sex at one point). Equally, Elizabeth De Rasso spends a reasonable percentage of her scenes naked but is also a plus-size woman, something you rarely see in nude scenes.

The Greasy Strangler has such a sense of bizarreness that it surpasses any easy critical handholds you can throw at to label or compare it. Much of the film takes place in the surreal banality you get in the works of directors like David Lynch or Jim Jarmusch but twisted to a bizarrely over-the-top level.

Many scenes have two or more actors engaged in repeatedly shouting the same lines back at each other – “Bullshit artist,” “Hootie tootie disco cutie,” “no free drinks” or asking a tourist from India what the chips are made of. Michael St Michaels seem obsessed with eating grease on everything, including spreading it on toast, grapefruit and in the opening scenes contemplating the idea of having grease in his coffee. The film also has a unique, cartoonishly simplistic score that becomes undeniably catchy. You may come out of this film with your sense of reality somewhat more damaged than when you went into it.

Jim Hosking subsequently went on to direct An Evening with Beverly Luff Linnr (2018).