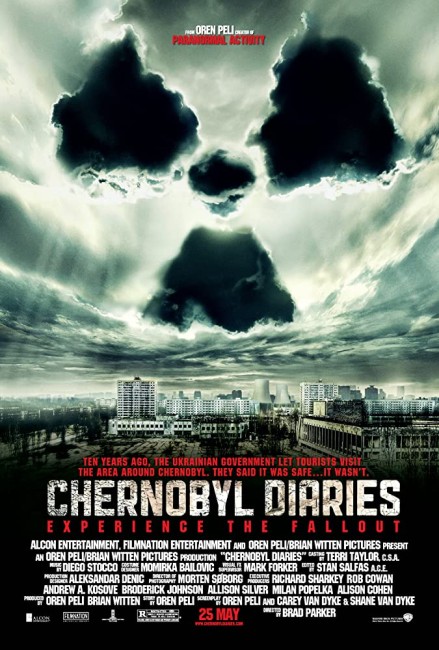 Chris and his girlfriend Natalie, along with a friend Amanda, are on a holiday tour of Europe. They meet up with Chris’s brother Paul in Kiev. Paul persuades them to go on what Chris decries as another of his crazy schemes – to take an extreme adventure tour of the town of Prypiat inside the exclusion zone that has been erected around the radiation-contaminated site of the Chernobyl nuclear explosion. Their tour guide Uri takes them in via a backroads route and they walk through the deserted city. As it becomes dark, they prepare to leave, only to find that someone has stripped the wires from the van’s engines. They then realise that someone or something out there is stalking them.

Chernobyl Diaries comes from former videogame designer Oren Peli who had a smash sleeper success in 2009 with his micro-budgeted Found Footage film Paranormal Activity (2007). Since then, Oren Peli has been absent from the director’s chair with his second film Area 51 (2015) having been delayed in release seemingly forever. Most of his time has been spent as a producer of other people’s films, including the likes of James Wan’s Insidious (2010), The Bay (2012), the short-lived tv series The River (2012), Rob Zombie’s The Lords of Salem (2012) and three Paranormal Activity sequels. Chernobyl Diaries is one of these productions from Peli’s pen. It is a directorial debut for former visual effects supervisor Bradley Parker.

Chernobyl Diaries has a unique and original premise. Or perhaps one should say more so than premise it has a unique and original location. It takes as its centrepiece the forbidding town of Prypiat located in Ukraine. Prypiat was built by the Soviet authority in 1970 to house the workers at the nearby Chernobyl nuclear power plant. Following the explosion at Chernobyl in 1986 that spewed radioactive contaminant into the atmosphere, Prypiat and surrounding regions were evacuated and abandoned. The authorities erected a nineteen-mile exclusion zone around the heavily contaminated area, forbidding all humans from entering, although many squatters have snuck back into the region to live since then. The film makes as part of its premise the existing phenomenon of illicit adventure tourism into the region that has grown up in recent years. The events around the accident were subsequently portrayed in the devastating mini-series Chernobyl (2019).

Chernobyl Diaries is not the first horror film to claim to be shot inside the exclusion zone – Return of the Living Dead: Necropolis (2005) also made the same claim – although in both cases neither film was shot there. Chernobyl Diaries wants to give you the impression it has done so in the publicity but was in fact shot in Hungary and Serbia. In both cases, it is hard to believe that a production crew would get completion guarantors to sign off on a film if they proposed going and shooting inside a radioactive hot zone – not to mention one where entry is forbidden by Ukrainian authorities. Mindedly, the BBC got a documentary crew inside in 1996 and Irish director Juanita Wilson managed to sneak a crew in there to make the short film The Door (2010), which was nominated for an Oscar.

Chernobyl Diaries reminds considerably of the recent The Darkest Hour (2011). In both cases, they are US films that have packed up crew and gone to shoot in the former Soviet Republics (or at least give the impression that they have done so). In both of these films, the virtue of the film is the location – an area that is remarkable or unknown to Western eyes. In both cases, the central characters are US tourists come to innocently enjoy the country they are in, only to run astray of something menacing. The difference can be seen in that The Darkest Hour held no interest in its location (Moscow); Chernobyl Diaries, though it does not film in Ukraine, is genuinely interested in Prypiat both as a location and Chernobyl as a sociological phenomenon. Indeed, take the location away from Chernobyl Diaries, and there would be nothing to it as a film, whereas The Darkest Hour could take place in any city in the world.

Chernobyl Diaries is reasonably well clued up on the facts of Chernobyl, cites many of these throughout and does an excellent job of mocking up a likeness of the eerily deserted Prypiat, which looks exactly like the images seen in the documentary footage. (In fact, the film offers a far more convincing portrayal of Chernobyl than A Good Day to Die Hard (2013) did on a far bigger budget). Perhaps the only credibility flaw comes at the climactic scenes that has the party entering into the deserted reactor control room whereas in reality Reactor No 4 had been encased in a concrete mausoleum by the Soviet government.

Armed with a genuinely interesting and original location, Bradley Parker then proceeds to deliver a film than generates a well above average level of tension. From the entirely WTF moment when the appearance of a bear down a hallway causes the audience to jump out of their seats, the film succeeds in digging into you. There are a number of successively effective jolts in similar kind throughout – dogs slamming up against the van window, people being snatched, the appearance of mystery figures.

The film is shot in a way that feels like it keeps wanting to be one of the Found Footage films that Oren Peli created a vogue for after Paranormal Activity – there is much in the way of blurred handheld camerawork as the party run through and react to the environment – even though that is not the case. There is not ever much more to the film beyond its kinetic drive in the generation of tension and making the audience jump but you cannot deny that it does a more than reasonable and effective job of doing so.

Interestingly, the exact agency that is hunting the party is kept shadowy throughout – we never even know who or what this is right up until the end of the film and even then the script never specifies much at all. Even the party of characters in the film are minimally sketched and given little beyond having first names. As such, it is actually the character of the gregarious and ambiguously friendly Russian guide (Dimitri Diatchenko) who comes to the fore and dominates the show over the relatively anonymous identification characters.