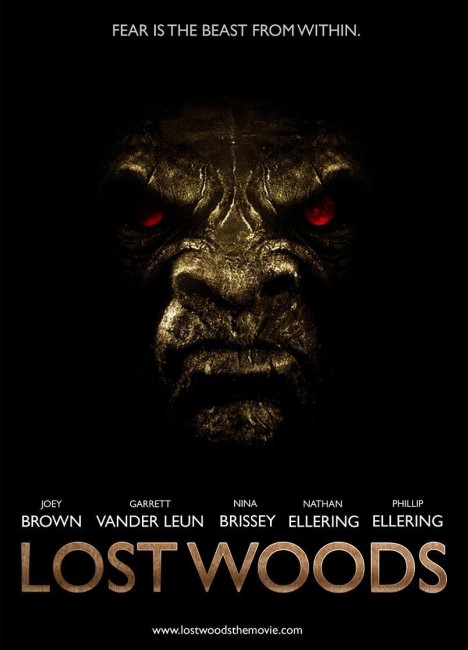 Darrin is dragged out on a camping trip in the woods by four of his friends. As the group sit back sinking a few beers and going over old times, they are attacked by a Bigfoot creature that proceeds to slaughter its way through most of the party.

Brothers Nathan and Phillip Ellering were industry newcomers with Lost Woods, which was their first (and so far only) film. The two brothers also play central roles in the film – Nathan is the one with the mullet wig and Phillip plays Joey Brown’s redneck best friend in the plaid shirt.

The Ellering Brothers seem set to make yet another Bigfoot film (although the end reveals that is not quite the case – more on that in the last paragraph). Even though Lost Woods gives appearance of being a low-budget film made by wannabes outside the regular industry, it emerges as passably well made for the most part. Usually novice directors show up their worst in the handling of actors and do so without nuance or leave them spouting stock cues. By contrast, one of the strongest aspects of the show is in their allowing the five friends in the woods to come across as regular ordinary people. (Although maybe the film could have done without a scene that pans along the guys standing in a row pissing in the woods while singing in a chorus line – it is one of those cute gags that must have been hilarious for the cast to rehearse but on screen feels like something that should have ended on the cutting room floor).

The film also does reasonably well once it unleashes its Bigfoot. This is quite a fearsome creation on screen – big and hugely bulky with unnervingly glowing eyes. The latter half of the film consists of nothing more than the central cast being pursued through the woods and eliminated by the Bigfoot, while trying to fight back. While the screenplay for what happens during this section could have been written on a total of about two pages, what you do have to admit is that the Ellering Brothers generate a reasonable intensity.

Where Lost Woods starts to fall down is its weird left field ending. [PLOT SPOILERS]. The Bigfoot is finally killed only for Joey Brown to find that it is mutated human – the missing tramper who was all over the news in the opening scenes, it would appear. It is not exactly clear what happened but we get the impression from the brief flashback that he encountered something that mutated him into the Bigfoot. As he dies, a beam of energy goes up into the heavens, indicating something of extraterrestrial origin but nothing is any more clear than that. There is also a silly subsequent piece where Joey Brown picks up Nathan Ellering’s comic-book, which seems to have foretold this – shades of something like Unbreakable (2000) – before he makes the decision to pack his backpack and walk off down the train lines, presumably to a life as a hobo.