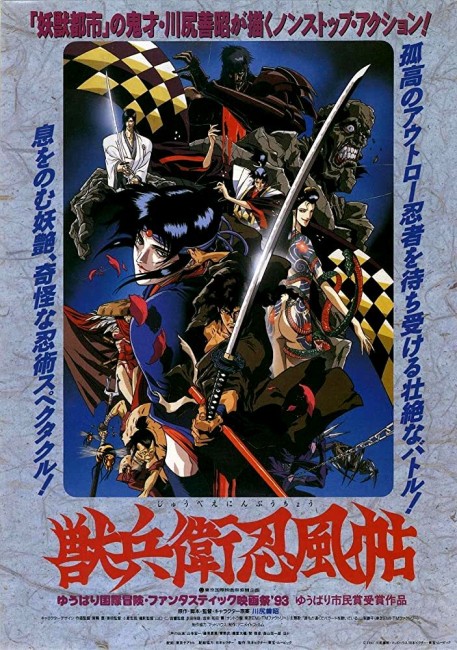 The Machizuki clan despatches a team of ninja to investigate reports that an entire village has been wiped out by plague. Arriving, the ninja are killed by a hulking monster. The only survivor is the female ninja Kagero who is saved by the mercenary ninja Kibagami Jubei who despatches the monster. Jubei is followed by the aging but agile Dakuan, a spy for the Tokugawa government. Jubei declines Dakuan’s offer to work for him. Dakuan then informs Jubei that he has been poisoned and that Dakuan will only give him the antidote if Jubei accepts the assignment. Dakuan reveals that they are up against the Shogun of the Dark, who fights on behalf of the deposed Toyotami clan that are seeking to overthrow Dakuan’s masters. Jubei realises that he is dealing with his old enemy Himuro Gemma. Jubei killed Gemma but Gemma has been able to return from the dead and now commands the Eight Devils of Kimon. They are joined by Kagero who has a deadly poison in her system that will kill any man who tries to even kiss her. Together they must fight off the supernatural assassins that Gemma brings against them.

Yoshiaki Kawajiri has a substantial reputation in anime. He has been the director of films like Lensman (1984), an episode of Neo-Tokyo (1987), Wicked City (1987), Demon City Shinjuku (1988), Vampire Hunter D: Bloodlust (2000) and Highlander: The Search for Vengeance (2007). Ninja Scroll has a reputation as a cult classic. It even comes with the admiration of The Wachowskis who were fans – watching the film you can see they’ve borrowed moves from it. They later employed Kawajiri as a director of the Program episode of their anime compilation film The Animatrix (2003).

Ninja Scroll is an extraordinary film. It is as though Yoshiaki Kawajiri had taken the fantastical moves of Hong Kong’s Wu Xia cinema and blended them with the traditional Japanese samurai film. The action is beautifully stylised. The scene is set perfectly by the opening where we meet Jubei as he encounters three assassins on a bridge and eliminates all three of them in a series of dazzlingly stylised moves. Things continue a few minutes later with the image of the army of ninja flitting through treetops and going into action in slow-motion animated leaps as they encounter a monster who blasts people apart en masse in scythes of light, including tearing one victim apart and upending the severed body to drink its blood. (As anyone who has seen any other of Yoshiaki Kawajiri’s other films will know, Ninja Scroll comes with not much held back in terms of violence, bloodshed or on-screen sexuality).

Ninja Scroll came before the era of computer and three-dimensional animation but is beautifully animated in 2D. Kawajiri packs the film with a stunning depth of incidental detail. Indeed the whole film has been storyboarded and directed as though it was a live-action action film rather than animation. Nothing comes more beautifully stylised than the flashback where Jubei comes across a horse rider in the snow and leaps into the air in slow-motion, severing the rider’s head in a great gout of blood. Or just the dazzling imagination of shots of people leaping into action seen reflected off the blade of a sword. There is a fabulous battle between Jubei and the vast hulking rock monster and especially the climactic scene where he confronts his near-invincible nemesis Gemma in a burning ship. Unlike most anime, Kawajiri directs with a grim edge making for a sombre film rather than the usual cutsie heroism of much anime.

The plot is complicated in terms of trying to work out which faction we are following at times. That said, the essentials following Jubei, Kagero and Dakuan on their journey and the various assassins they encounter is fairly simple stuff. A great deal of the fun in the film comes in the wonderfully imaginative line-up assassins they are pitted against. There’s the female assassin who appears naked to Jubei in the rock pool where her tattoos come to life to attack as snakes, before she is revealed to be no more than a cast-off skin herself. There’s an amazing scene where Kagero stops the female assassin Benisato who then jabs him from between her thighs with a snake, only for the controlling Yurimanu to sever the invisible thread around her neck. Or the assassin Michizu who is gutted with a sword, only for his skin to tear open and reveal a caged hive of wasps where his ribcage should be. In possibly a homage to the Zatoichi series, we also have a blind swordsman.

The most imaginative character is the heroine Kagero who comes with the unique ability of having a poison in her bloodstream that will kill anyone who tries to kiss or have sex with her, which makes her surely one of the most unique heroines ever in a film. The film even manages to find time to have a tragic love story between her and Jubei going on.