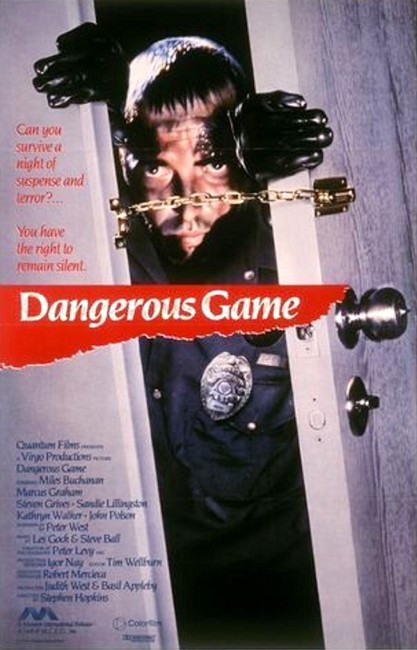 In Sydney, Australia, a group of university friends are harassed by obsessive motorcycle police officer Murphy. This all because Murphy’s superior used to be the late father of Jack Hayward, one of the group. While pursuing them, Murphy ends up crashing into a line-up of motorcycles outside the police station. He is placed on suspension for his behaviour but this only makes Murphy seethe further. Jack’s friend David Forest is a hacker. Seeking to demonstrate his skills, David hacks into Markwels department store and unlocks the security door. The group go to see for themselves and enter the store. However, Murphy follows and locks them inside where he proceeds to harass and taunt them. When things go wrong and one of the group is killed, Murphy arms himself with weaponry from the sporting goods section and begins hunting them.

Dangerous Game was the first film from Australian director Stephen Hopkins. Apparently it generated sufficient notice internationally that Hopkins was immediately snatched up on the basis of it to make A Nightmare on Elm Street: The Dream Child (1989) and from there went on to a reasonable Hollywood career directing the likes of Predator 2 (1990), Judgment Night (1993), Blown Away (1994), The Ghost and the Darkness (1996), Lost in Space (1998), Under Suspicion (2000), The Life and Death of Peter Sellers (2004) and The Reaping (2007). Since the mid-2000s, Hopkins has been directing and producing in tv.

Dangerous Game has an unusual set-up. It is half of the show before it becomes the horror film it sets out to be. The story follows a group of teens that motorcycle cop Steven Grives has obsessively fixated on. (It must be said that Grives gives a fine performance of seething, uncontrolled rage). You get the impression that someone thought it was a good idea to graft on an interest in computer hacking onto the script – WarGames (1983) had been a popular hit a few years earlier. As a result, we get the addition of an awkwardly contrived plot where hacker Miles Buchanan hacks in and unlocks the department store security door and they all have to go along to see for themselves whether what he says is true whereupon Grives follows, locks them in and starts stalking them.

From about the halfway point when Stephen Hopkins finally gets down to making the type of film he wants to, we have something that is in essence not much more than a glorified slasher film. There is the interesting oddity of a psycho who didn’t actually intend to kill anybody, where the first victim was an accident and the rest appears to be about him eliminating witnesses. Dangerous Game also appears to have been given a much better budget than the average slasher film. There appears to have been sufficient budget to mock the department store up in the studio – apparently the largest set ever built for an Australian film in its day.

Amid this, Hopkins does create at least a couple of moderately spectacular set-pieces – one with Steven Grives pursuing two teens through the glassware section, bringing an entire room filled with glass shelves and their contents crashing down like a line of dominoes; and the other a sequence where Steven Grives pursues Marcus Graham out onto the ledge that surrounds the building and Graham is forced out onto the sparking electrical wire in his efforts to get away. We even get scenes with Grives pursuing the teens around inside the department while riding on a motorcycle.