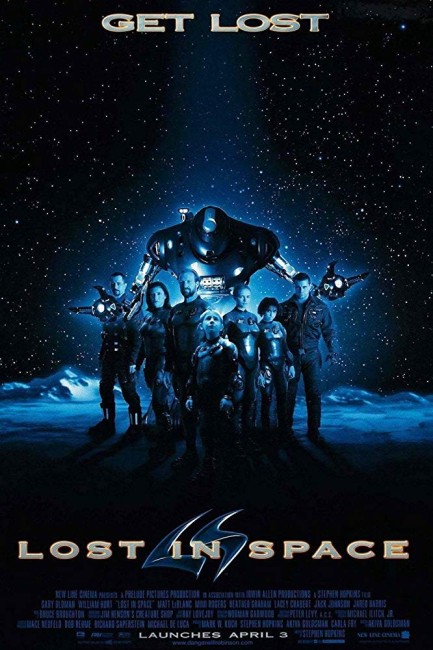 The Robinson family are about to be launched aboard the Jupiter Mission to the planet Alpha Prime to set up a hyperspatial gate that will allow colonization and relieve strained environmental resources on Earth. However, the family is divided by dysfunctionality with the two youngest children Will and Penny resenting their father’s lack of attention. Meanwhile, a terrorist organisation has ordered Dr Zachary Smith to sneak aboard and sabotage the mission only to abandon him for dead as the ship is launched. As Dr Smith and the Robinsons struggle to stop the robot that Smith has programmed to go amok, they are forced to engage the hyperdrive to stop the ship going into the sun. However, this causes them to emerge at a point where they are lost in space.

Lost in Space was another entry in the 1990s/00s fad for big-screen remakes of 1960s/70s tv series. The film was a reasonable hit, although received a middling response if not outright slamming from the critics. The critical response in this case is interesting with reviewers either tending to be condescendingly praiseworthy (“nice effects, just switch the brain off”) or negative for a variety of reasons that seem to hover around something to do with the film’s failure to be faithful to the original series. (The most bizarre review was the wholly hostile one in the New Zealand Listener, which interpreted the costumes and the promotional LS logo as neo-Nazi and the relationship between Will Robinson and Dr Smith as paedophile).

All the talk about faithfulness to the original Lost in Space (1965-8) is founded on the misapprehension that the tv series was some classic – which it isn’t. When it began, Lost in Space was a typical space opera – akin to Flash Gordon (1936) or some copy of a 1950s juvenile tv serial like Rod Brown of the Rocket Rangers (1953) – recast for the Space Age. However, Lost in Space was poor science-fiction, shockingly ignorant of basic science (a basic trademark of any Irwin Allen science-fiction series) and lacked any conceptual depth other than featuring a monster or space cowboy of the week.

With the second season and the move into colour, the camp element took over with Jonathan Harris’s Dr Smith, supported by Will Robinson and the robot, becoming the star of the show and playing to the camera as broadly as possible. It is the camp silliness and the kitsch appeal of the show’s corniness today that has made Lost in Space a cult item. Certainly, its popularity in reruns is for reasons that have almost nothing to do with science-fiction.

The movie was criticised for its lack of humour, in taking a much grittier, more realistic approach and for having abandoned the style of the series. Which, if any of the critics sat down and examined what they were saying, is a fatuous statement – any faithful approach would surely have left the film emerging as some science-fictional cousin to The Adventures of Priscilla, Queen of the Desert (1994).

There was the question of which way the film would go. One had the dreadful feeling that Lost in Space would turn out something like The Brady Bunch Movie (1995) with the 1960s po-facedness put through the sarcastic wringer of 1990s deconstruction. Moreover, the presence, as both scripter and producer, of Akiva Goldsman did not exactly inspire confidence. Goldsman is someone whose scripting/producing work has remained consistently terrible and time after time has treated source material with contempt.  (See below for Akiva Goldsman’s other films). At most, the trailer gave the indication that the film would be all special effects flash and a no-brain “sci-fi” script.

The surprise is that Lost in Space is a halfway reasonable effort. It remains reasonably faithful to the series basic mythology while also refashioning it into a scenario where real world temperaments intrude upon the absurd perfect nuclear family ideal the 1960s series held up. Now the Robinsons are a dysfunctional family – Penny is a cynical punked-out brat and Will an ignored child prodigy who only wants his father to spend some time with him; the women no longer stand about and do the cooking while the men go adventuring but are all technically competent and hold doctorates; Major West goes from the handsome hero to a cocksure macho jerk and in comes a good deal of overt sexual banter between he and Judy; we even get to see Dr Smith performing a medical operation and Don West being the pilot, which we never did in the series. The basic design of the robot is retained but at the same time it rebuilt into a heavily armoured fighting machine.

There are a number of other touches that only fans of the original would pick up – how Penny gets a new CGI version of her old space-monkey; or how Gary Oldman does a perfectly accurate mimicry of the craven and loquacious character that Jonathan Harris created and naturally gets to entangle Will into his schemes while trotting out classic Smith-isms “Never fear, Smith is here.” The minor parts have been filled with cameos by members of the original cast – Angela Lockhart (the mother in the series) is the holographic president whose image Will messes about with at the start; Marta Kristen (Judy in the series) and Angela Cartwright (Penny in the series) are reporters at the press conference; and Mark Goddard (Don West in the series) is the general who assigns the new Don West to the mission. (In an intriguing piece of trivia, the release of the film comes one year after the date that the tv series set as the year of the Jupiter 2’s launch).

Just seeing how the film has reconstructed the familiar characters and icons of the original is intriguing. The film is filled with some breathtaking effects sequence and is directed at an immensely exciting pace. The venture into the abandoned Proteus is a marvellously suspense-fraught set-piece. The sheer kinesis of the film carries it but the downside is that while the film sets itself up well, its last quarter act falls apart. Akiva Goldsman’s time-travel plot is far too ambitious for the hurtlingly-paced space opera the film is trying to be.

Furthermore, it seems only half a plot, one that leaves all manner of questions and loopholes hanging – how does the future with the elder Will still remain extant instead of being edited out once the past is changed? Or exactly what is the Proteus mission meant to be doing – did The Jupiter II travel through time or not and, if so, why didn’t the Proteus mission? The climactic dive through the planet’s core is geologically preposterous. Nevertheless, the film for the most part manages to divert one’s attention with its dark and savvy reworking of the series mythology and its hurtling array of effects bravado.

(Nominee for Best Special Effects and Best Production Design at this site’s Best of 1998 Awards).