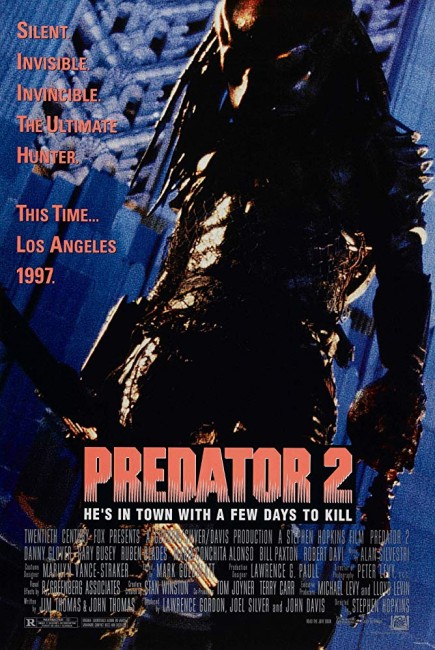 Los Angeles, 1997. A Predator alien arrives in the midst of an armed street war between the police and drug lords, effortlessly claiming victims from either side as its trophies. Police lieutenant Mike Harrigan becomes caught up in the midst of this as he tries to find what is behind the killings. As the members of his task force are picked off, the fight evens out into a one-on-one duel between Harrigan and the Predator.

Predator (1987) was one of the best films to come along attempting to exploit the success of Alien (1979) and Aliens (1986). A large part of this was due to the starring presence of Arnold Schwarzenegger at the peak of his action superstardom. Such success was inevitably followed by a sequel, which we duly received here. Subsequent plans for a Predator 3, though announced, failed to come to pass – at least for another two decades.

Following the first two films, the Predator series continued on in a series of comic-books from Dark Horse. From 1989, the Predator comic-books started to cross over with the Alien series in Dark Horse’s popular Alien vs Predator series. Out of this grew the long held fan conjecture that the two franchises would eventually meet on screen due to the fact that the same company (20th Century Fox) held copyright on both series – a number of spec fan scripts circulated on the internet. (Such is even tipped here when we venture into the Predator’s ship at the climax and a Xenomorph head can be seen among the trophies on the wall). The crossover eventually came about on screens a few years later with AVP: Alien vs Predator (2004) and AVPR: Aliens vs Predator Requiem (2007). Both of these films were intensely disliked by fans and the series reverted to course a few years later with Predators (2010), followed by The Predator (2018).

Considering that the first film was mounted as no more than an action-driven Alien(s) cash-in, Predator 2 emerges as a fairly good sequel. It is never a sequel that does much more than rehash Predator. Though written by the same two screenwriters as the first film, is it never a story that gives the impression it is exploring new ground – the only original ideas it injects into the series is moving the locale from the jungle to a near-future Los Angeles – and otherwise repeats the basics of the first film all over. However, the move from a floral to a concrete jungle leaves the story lacking the bared simplicity the first film had where everything was stripped down to a primal barehands battle between man and Predator.

Arnold Schwarzenegger’s role has been inherited by Danny Glover. Probably Glover would never have ended up in Predator 2 if he had not had the association of starring alongside Mel Gibson in the mega-hit Lethal Weapon (1987) from Predator series producer Joel Silver a couple of years earlier. The substitution of Schwarzenegger for Danny Glover sits at strikingly opposite extremes. Schwarzenegger is a he-man action star and bodybuilder; Danny Glover has carved out a subsequent career as a character actor. In the lead role, Glover convinces less of a stalwart hero who muscles his way through the action with brute strength, bravado or cool, than he does just a plodding regular working joe who sweats his way there and is left puffing after running.

Stephen Hopkins took up the director’s chair for Predator 2 on the basis of A Nightmare on Elm Street: The Dream Child (1989). The accusation you could make of Hopkins is that he mistakes strobe lights and a continuous barrage of noise for action. Or that he aims for a faux toughness by inserting hard-assed dialogue with lots of reference to male body parts – even the Predator gets into it, implausibly sitting up after being downed at one point to snap “motherfucker” in Danny Glover’s face.

Despite an unconvincing first half, the film picks up into something modestly intense in the second. Hopkins turns the battle with the Predator in the subway system into a fast and furious piece lit up by strobe lighting. The mission into the slaughterhouse does a suspenseful job of imitating the scenes from Aliens with the marines venturing down into the colony. Danny Glover’s slam-bang shootout with the Predator, hanging from the side of a thirty-story building, crashing through apartments and finally down into the alien ship is an intense armchair ride.

The alien ship itself is strikingly designed with illuminated bas-reliefs, while Stan Winston and team return to recreate the Predator in even better detail.