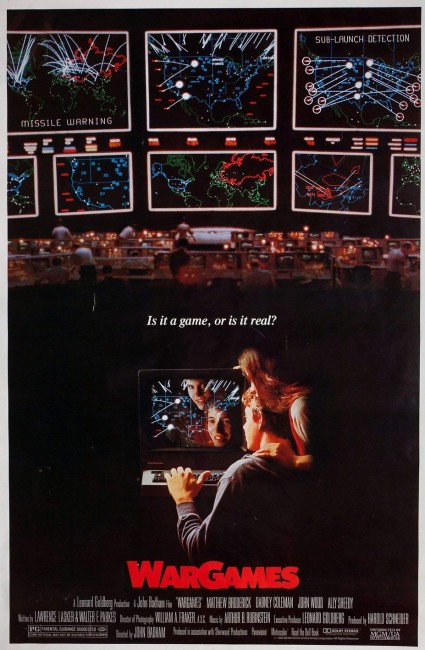 To impress his girlfriend Jennifer Mack, seventeen year-old David Lightman hacks into the school computer and changes their failed grades. Next he hacks into what he thinks is a videogame company, which allows him to play a game called ‘Global Thermonuclear Warfare’. Unknown to him, he has in fact accessed the artificially intelligent strategy planning computer at NORAD, which now sets off a nuclear war alert.

WarGames was one of a host of films that came out in 1983 dealing with the fears of nuclear war afresh, all of which were concurrent with Ronald Reagan’s massive escalation of the nuclear showdown with the Soviets. Other films that came out around this time included The Day After (1983) and Testament (1983). WarGames offered a unique spin that also managed to tap into the then burgeoning videogame market. It is, if you like, Dr Strangelove or, How I Learned to Stop Worrying and Love the Bomb (1964) – or even more so Fail-Safe (1964) – reconfigured for the videogame generation. Although, if anything, it comes the closest to the Star Trek episode A Taste of Armageddon (1967), which featured a society where all strikes and fatalities in an interplanetary war are calculated by computer and no shots actually fired.

WarGames is an interesting film to watch in the company of computer nerds. Certainly, some of its datedness – it is amazing to watch Matthew Broderick hack into NORAD using a computer that takes 8″ discs – shows just how much the PC revolution and its advances has indistinguishably crept into people’s lives. The nerd contingent managed to pick a number of holes in the film – like how when Matthew Broderick cuts the power on his computer the termination of the connection automatically causes a systems crash at NORAD, or how the computers being used could not handle sound cards of the sophistication required. The major improbability though is not technological but tactical – the idea that NORAD would hook a simulation computer up to the real thing. A large part of the film requires that the US military have no independent means of determining that the country had not been nuked and no way of telling that what is happening is all a simulation.

Unlike a number of other computer thrillers, the technical conviction is less important than the ideas the film carries. WarGames was one of the first of the new generation of science-fiction films that embraced computer technology full on. Much of what takes place in the film was way ahead of its time. WarGames was the first film to introduce the public at large to what would become known as ‘hacking’, not to mention showing the concept of the modem and dial-in before the worldwide web had even come into public embrace. (Although, the embryonic idea of hacking can be seen sort of in the earlier sf film The Last Chase (1980), even though it predates the idea of the internet or hacking). Placed up against some of the later films to deal with hacking such as Hackers (1995) and Swordfish (2001), despite more than a decade’s datedness, WarGames still remains one of the best films to show the pure thrill and excitement of what hacking involves.

WarGames is an interesting film to run alongside Colossus: The Forbin Project (1969). Both are films in which the US Department of Defense turns its nuclear weapons over to be run by a computer system. In Colossus, the fears are of the system turning against humanity and deciding it can run things better than we do; by the time of WarGames, the computer had become so friendly and accepted that the notion has changed merely to a question of the fallibility of the system’s security. The real fear is one that would become more prevalent after the introduction of Virtual Reality themes, the blackly comic notion of a nuclear missile launch program being able to be played just like and even mistaken for a videogame. WarGames was one of the first films to deal with the occlusion of the virtual with the real – while here it is just a case of the real thing being mistaken for a videogame, a decade later in films like Arcade (1994), Brainscan (1994) and eXistenZ (1999), videogames were seen to have developed such sophistication that they could not even be distinguished from the real world.

WarGames is at its best during the first half where the unfolding of the premise is conducted with considerable excitement. The script is particularly well written in its following the amusingly black escalations of the consequences of Matthew Broderick’s guileless initial hacking – how the FBI start questioning him about tickets booked to Paris – or the resourceful ingenuity that Broderick manages to demonstrate in making escapes. The two teens, Ally Sheedy in her debut performance and Matthew Broderick in his second, bring a fresh vitality to the film.

In its latter half, WarGames becomes an irritably message-heavy film. It takes a caricatured moral stance and director John Badham delivers it with a heavy-handedness. The adults in the film – both John Wood’s idealistic scientist and in particular the military types – are one-dimensional caricatures. The end point about nuclear war being a non-winnable game is well delivered – a point that has been taken directly from the game theory of mathematician John Nash of A Beautiful Mind (2001) fame and its application to the idea of nuclear war as a ‘no constant sum game’.

WarGames: The Dead Code (2008) was an entirely laughable sequel, where the only returnee from the original was supposedly the WOPR computer.

Director John Badham first emerged to public attention with the runaway success of Saturday Night Fever (1977). He entered genre territory with the lush romantic remake of Dracula (1979) starring Frank Langella. In the mid-80s, Badham made a trilogy of science-fiction films, beginning with the hi-tech helicopter thriller Blue Thunder (1983), WarGames and the cute robot film Short Circuit (1986). All three of these are critical of the US military establishment and show hi-tech instruments of war being turned towards the general good by members of the public. Badham has yet to return to genre material subsequent to these. His output in the 1990s has become a formulaic line of action films and light comedy – Stakeout (1987), Bird on a Wire (1990), Point of No Return/The Assassin (1993), Drop Zone (1994) and Nick of Time (1995).

Screenwriters Lawrence Lasker and Walter F. Parkes later went onto deliver another hi-tech hacker thriller, the highly enjoyable Sneakers (1992). They also wrote and produced Project X (1987), an animal liberation film about chimpanzees being used to conduct nuclear radiation tests. Since the mid-1990s, Parkes has been working for Steven Spielberg and is listed as an executive producer on many of his films.