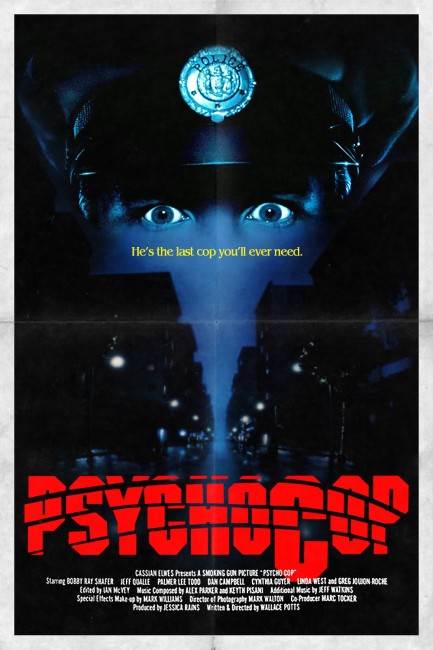 Three guys and their girlfriends get away from university for a weekend. Two of the guys have won money on the stockmarket and have decided to splash out by renting a large house in the countryside. On the road there, they are followed by a police car. As they settle into the house, the police officer – devil-worshipping Joe Vickers who has gone rogue from the job – stalks them and then starts killing members of the group.

PsychoCop is another legendary film back from the heyday of the VHS era. It may well have been made riffing on the success of the psychopathic law enforcement officer we had in the better-budgeted Maniac Cop (1988), which came out the year before and was successful enough to spawn two sequels.

PsychoCop resembles a typical slasher movie of the era – not something you could say about Maniac Cop. Indeed, it would take very little effort to rewrite Bobby Ray Shafer’s murderous cop with another maniac in a hockey mask, so little does his being a police officer have any real relevance to the story. Director Wallace Potts unimaginatively borrows from the slasher movie book of tricks – a variety of novelty deaths for each of the victims; killer’s point-of-view shots peering through the trees and sneaking up on people; even a copycat Friday the 13th (1980) ki-ki-ki-tsh-tsh-tsh score.

All the killing set-ups are generic and Wallace Potts offers little that is original. Indeed, the psycho cop seems to spend more time gaslighting the victims than actually killing them – he variously stealing purses, hairbrushes, ghetto blasters, the group’s beer supply and even spilling soup all over the kitchen. Cast as the titular psycho, Bobby Ray Shafer is no actor – all he gives the part is a wide-eyed stare and a mad gleam that contrarily causes him to come out looking like a cartoon character. The film also outfits him with a series of lame puns (the Freddy Krueger films were at the height of their popularity during this period).

PsychoCop Returns (1993) was a sequel, featuring a return performance from Bobby Ray Shafer, although director Wallace Potts was replaced by Adam Rifkin.

Wallace Potts is listed as making four other films but there are very few details about these available and nobody seems to have seen them.