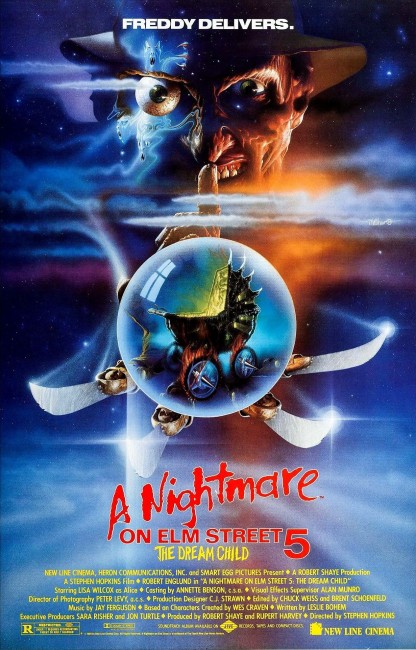 Alice Johnson is about to graduate from high school but finds herself being haunted by dreams of Freddy Krueger. Freddy then emerges and starts killing her friends. Alice does not understand how Freddy can still alive after she killed him. She then discovers that she is pregnant and realises that Freddy is attempting to return to life in the body of her unborn child.

Though the script promisingly comes from Splatterpunk authors John Skipp and Craig Spector, as well as Leslie Bohem, the creator of Taken (2002), it is fairly much only the same old thing. However, Aussie director Stephen Hopkins, who had previously only directed the obscure killer crocodile film Dangerous Game (1988), enters at an inspired level. He whips the film about with such an energy that what could well be silliness in anybody else’s hands is transformed into a genuine weirdness – a motorcycle melds with its rider and transforms into a demonic H.R. Giger-esque biomechanoid vision or an incarnation of the Ghost Rider comic-book, charging down a highway billowing smoke; another victim is whisked into the world of a black-and-white comic book where he is turned into a two-dimensional cutout and all the colour drained from him into a puddle at his feet.

The climax takes a leaf from the climax of Labyrinth (1986) and is set amid a world of topsy-turvy M.C. Escher sets where, in a venturesome swagger of imagery, Freddy physically emerges from the heroine’s body only to then to be ripped apart by faces tearing their way out of his own body. There is some silliness – Erika Anderson’s death by bulimia is not convincing. However, it is hard to hate a film that can offer the extraordinary image of seeing souls being dragged down an umbilical cord to where the villain is hiding in the pregnant heroine’s gestating foetus.