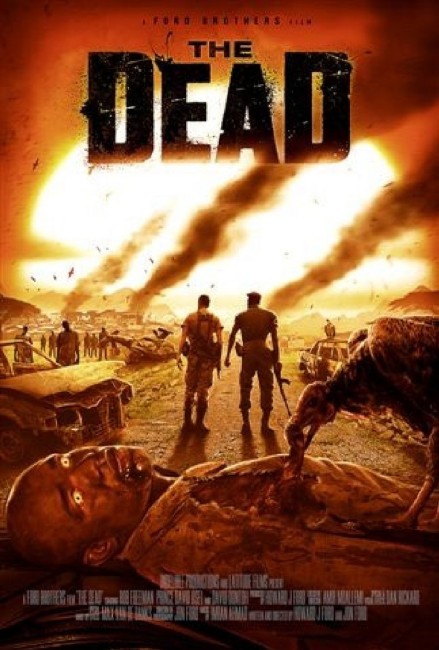 West Africa has become overrun by a plague of zombies. A military transport carrying several Western civilians out crashes after one of the infected passengers turns into a zombie. The only survivor of the crash is Lieutenant Brian Murphy, a flight engineer with the US Army. He makes his way in a vehicle that he hotwires. He is saved from a zombie attack by Daniel Dembele, a sergeant from the native army who was trying to save his wife and son from the attack before they were transported away. The two of them pair up to travel to safety through the zombie-infested territory.

The Dead – no relation to The Dead (1987), John Huston’s non-genre adaptation of a James Joyce story – is another entry in the massive spate of zombie films that spilled out into the lower end of the dvd market during the late 2000s. Most of the zombie films that came out during the late 00s are either of the low-budget and gore-filled variety or, as is increasingly the case, place their tongues in cheek and offer up wacky combinations of zombies and entirely incongruous elements such as cheerleaders, ninjas or Jane Austen. The Dead is notable as being one of the few serious zombie films still being made – the tongue-in-cheek zombie film has now become so prevalent that the original George A. Romero-type survival horror zombie film can be regarded as a dying breed.

Among these, The Dead was greeted with a reasonable degree of claim among those genre purveyors whose opinion I place stock in. There is a fine opening with a figure in a black burnoose emerging in the distance out of the desert on foot, undoing his head wrapping as he comes into camera to reveal that it is a blue-eyed Westerner (Rob Freeman). Coming towards him is a zombie whose leg has been bared of flesh and is stumbling along on bare bone. Freeman’s stranger simply steps around the zombie and continues on his way, all without a word being spoken. It is a scene that has an unusually evocative effect. Indeed, in its similarly haunted use of the African landscape, The Dead undeniably reminds of Richard Stanley’s fine and underrated Dust Devil (1992).

The Dead was filmed by British brothers Howard J. Ford and Jon Ford. Howard had previously directed Mainline Run (1994) and Distant Shadow (2000), an action film also set in Africa about a conspiracy to spread AIDS. The Ford Brothers shot The Dead in Burkina Faso and Ghana with a digital camera and a minimal crew. This allows them a far more expansive look than they would otherwise have achieved. For the simple fact that it is a zombie film that has attained enough of a budget to shoot internationally and takes itself seriously, this places The Dead several steps above most of its competition.

The Ford Brothers never vary too much from the George A. Romero standard. Take away the location, for instance, and give the film a more routine director and The Dead would be an unremarkable zombie film. Indeed, you have become so used to the zombie film searching for original ideas that you keep waiting for The Dead to do something radical and unexpected with the genre but, outside of the fact that it is set in Africa, it never does.

Even then you keep waiting for the film to make some grand social parable about the way that the West regards contemporary Africa as a black hole of political instability, poverty and starvation, in much the same way that George A. Romero used Night of the Living Dead (1968) as a savage social metaphor for the Vietnam War or Dawn of the Dead (1978) as a satire on modern consumerism, only for it to never to do so.

The Ford Brothers conduct the survival horror aspect with a hard-edged realism. In comparison to a Romero film, the tone is not so much apocalyptically bared and fired up with social metaphor as it is quiet and low-key. The Dead is not a film that aims for hard-hitting, gore-drenched battles to the death with the zombies, rather it is concentrated on its characters and location. The location is almost all of the film and for many long stretches the dialogue has been stripped away and is either terse or minimalist. The film is concentrated almost entirely between two actors, Rob Freeman and Ghanan emigre Prince David Osei. The Ford Brothers get fine performances from the two of them, in particular Prince David Osei.

The Ford Brothers made a sequel with The Dead 2: India (2014), which told fairly much the same story against the backdrop of India. Howard subsequently went onto direct the non-genre likes of the thriller Never Let Go (2015) and the children’s film Adventure Boyz (2019), before returning to the horror genre with The Lockdown Hauntings (2021) and The Ledge (2022) about a woman facing killers on a mountainside.