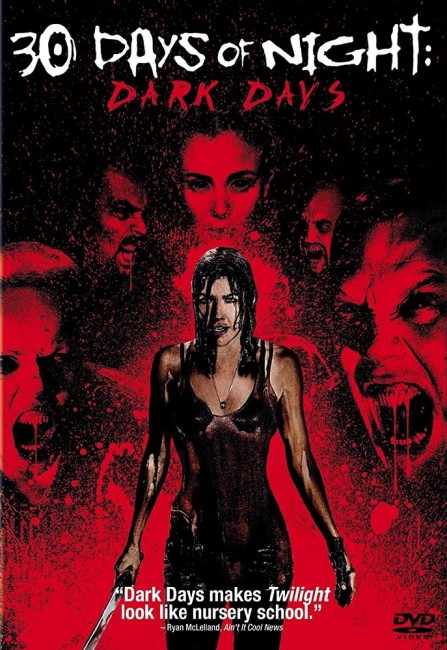 Following the events in Barrow, Alaska, Stella Olesen, the wife of the later sheriff Eben, tours the country telling people that the massacre was due to vampires not the gas explosion it was officially passed off as being This is greeted with ridicule. In Los Angeles, she counters this by turning on ultraviolet lights in the lecture hall, dramatically exposing the vampires amongst the audience. Immediately after, she is contacted by three people who similarly lost loved ones to vampires and have teamed as a group of vampire hunters. Joining forces with them, they set out to expose the hiding place of the chief vampire Lilith.

The film comes with a great, attention-grabbing opening where Kiele Sanchez is introduced as the wife of Josh Hartnett’s sheriff (replacing Melissa George who played the role in the first film). We meet her holding a lecture in L.A. to tell the truth about what happened in Barrow only to be greeted with sceptical laughter and so to prove what she says turns on a bank of UV lights, exposing the vampires in the audience and causing them to flee in the midst of burning up.

Where 30 Days of Night was a film about a town under siege by vampires – essentially a variant on Salem’s Lot (1979), albeit relocated to Alaska – 30 Days of Night: Dark Days is more a film about Vampire Hunters. If there is a comparison for this, it might be a film like The Forsaken (2001) with the vampire hunters as a ragtag team hunting by night on the fringes of society.

I expected nothing great of 30 Days of Night: Dark Days but ended up being pleasantly surprised and found it better than the average throwaway video sequel that I expected. Director Ben Ketai delivers it with far more style than one expects in scenes such as the aforementioned lecture scene or the first appearance of Mia Kirshner’s head vampire Lilith, rising up out of a bath of blood (a clear homage to Elizabeth Bathory) in the hold of a freighter.

As Lilith, Mia Kirshner comes with great lethal presence – all without saying a word in English. Kiele Sanchez also holds up fairly well for someone who gives all indication of being a faceless lead at the start, wading into the action as she discovers an increasing toughness throughout.