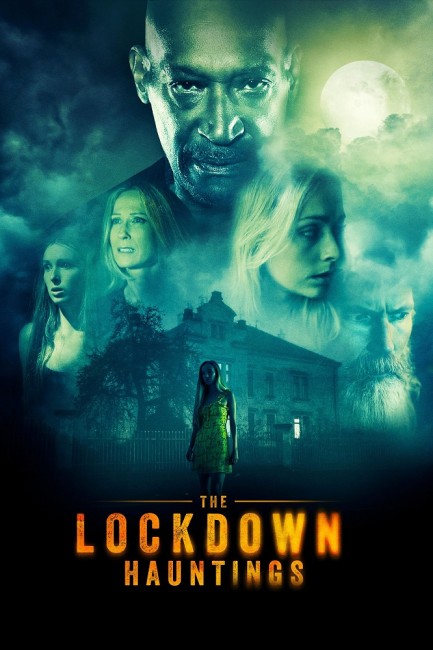 As the world goes into lockdown for the Corona Virus pandemic, parapsychologist Jordan Myers issues a series of video warnings where he claims that the isolation will allow supernatural entities the freedom to emerge. All over London, women are being attacked in their homes by something supernatural. Examining the police reports, detective George Parker finds a connection – that the initials XY have been left at every scene – and is forced to conclude that ghostly forces are responsible.

The Lockdown Hauntings is one of a number of films that were shot during the Covid-19 lockdown of 2020-1. In genre material, we also saw the likes of Corona Zombies (2020), Host (2020), Songbird (2020) and In the Earth (2021) and a good many others. Shooting during lockdown produced considerable logistical hurdles to filmmakers – of actors not being able to be in close proximity because of social distancing and masking restrictions; the requirements by most governments that people stay at home or in small groups. That said, there were still a number major studio tentpole productions and smaller efforts that continued to shoot during this time.

These restrictions resulted in new methods being forced on productions, usually ones employed by indie filmmakers – films being shot with very small crews, a mere handful of actors in the cast, or else people delivering performances at a distance (as some of the actors here do via Facetime and Zoom). Indeed, the end credits of The Lockdown Hauntings make a great thing of how “This film was shot during the first UK lockdown for Covid 19 … by one man.”

I had been impressed with director Howard J. Ford’s previous venture into genre material with The Dead (2010), a zombie film set in Africa. He and his brother Jonathan co-directed a decent sequel The Dead 2: India (2013). On his own, Howard then went on to make the non-genre likes of the thriller Never Let Go (2015) and the children’s film Adventure Boyz (2019). Subsequent to this, Ford went on to second film during the pandemic with The Ledge (2022) about a woman facing killers on a mountainside.

I was impressed with what Ford did on The Dead films and as a result I was looking forward to see what he would do with The Lockdown Hauntings. Unfortunately, the film ends up a disappointment. Part of the problem may be the logistics of the way it was made. Ford has clearly wanted to make a ghost story but abandons any adherence to genre plotting.

It looks as though Ford has recruited a bunch of out of work fashion models. The film shifts between various scenes where the girls walk around their respective homes, see something spooky and then an invisible force throws cutlery and crockery about before they are strangled. That’s the sum of the film. We have a few scenes where there is a digitally blurred shadow moving about but mostly these are scenes dependant on very low-tech wire effects, which are clearly the only resources that Ford could call upon during lockdown.

In other words, what we have is very little difference between the sort of amateur ghost story that gets made by wannabes (and this site reviews by the bucketload) where everything is shot in the director’s own home and all the effects are conducted for $1.98. Host did the very same thing with low-tech effects but built up a spooky story; here almost the whole film consists of scenes where girls get kitchenware thrown at them and nothing more. Ford delivers this with minimal to routine atmosphere.

In the latter half of the show, there are scenes with police detective Angela Dixon conducting an investigation (all from her home by internet!) and talking to some experts to determine that the agency behind the attacks is ghostly in nature. The film also opens with Tony Todd, delivering his entire performance by Facetime, giving an ominous warning about entities having been unleashed during the isolation of lockdown. Todd’s opening dialogue conjures something imaginative and is effectively aided by Ford’s montage tour of empty city streets but this only serves to conjure something more intriguing than the film actually delivers – of supernatural beings wandering the deserted cities in the absence of people.

However, all of this talk of unleashed entities is contradicted by the revelations that come at the end that the supernatural entity is one individual who died in jail for a series of killings and even then that it is not him after all but the abusive headmaster of the school he attended. Even the supernatural retribution seems very randomly applied – it feels like one of the Ju-on/The Grudge films where the ghost will kill anyone who is vaguely connected to what happened.