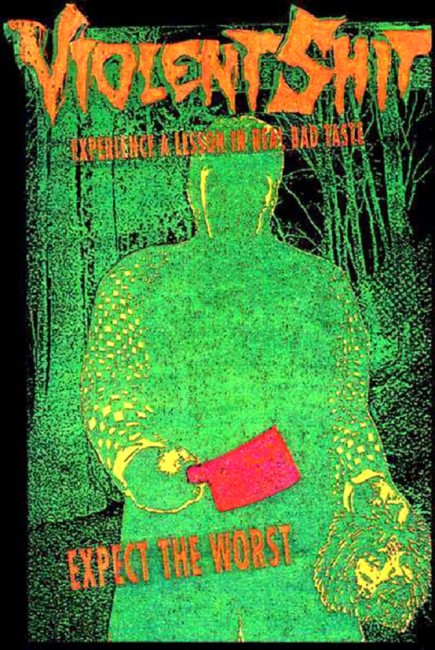 A young boy is punished for being home late and responds by killing his mother with a cleaver. Twenty years later, the grown-up boy is being transported in a prison van but makes an escape when they stop. He then goes on a killing spree through the area, bloodily attacking and dismembering anybody he comes across, often eating the body parts.

Andreas Schnaas was a German director who emerged in the 1980s (back when where he was living was still West Germany). After making a series of short films, Schnaas put his own money into making Violent Shit. The film became a modest video hit, even after being banned by the German government. The end credits offer a thank you to Ant Timpson – Schnaas used to correspond with Timpson back when he was an unknown rather than a film producer with the likes of The ABCs of Death (2012) and Come to Daddy (2019). During their correspondence, Timpson referred to Schnaas’s shorts as “all that violent shit” giving Schnaas the inspiration for his title.

Schnaas was shooting when video was the predominant medium for most low-budget filmmakers working outside the mainstream. And so Violent Shit comes with the grainy, low-quality of video-to-dvd transfer. More so than that though, Violent Shit is a zero budget film – it looks like it is made with as next-to-no resources as it is possible to get and shot using amateur actors on their weekends. Schnaas himself plays the killer, referred to on the credits as K. The Butcher Shitter.

There is really nothing more to the film that exactly what the title suggests – a series of violent and extremely gory scenes. A motorist is attacked by the roadside and gets their arm ripped off and dick severed (which we are later told has been eaten). Two men are working in a forest clearing – one gets a chainsaw in the head, which sprouts lots of blood, while the second has his torso severed from his body while he is still alive. In other scenes, we see someone’s intestines torn out. There is really nothing else to the film than these gore scenes – least of all a plot. Certainly, the gore scenes make the almost complete amateurism of the rest of the show somewhat watchable,

Andreas Schnaas made two sequels Violent Shit II: Mother Hold My Hand (1992) and Violent Shit III: Infantry of Doom (1999), which are more polished and feature Schnaas playing the killer’s son. Schnaas later co-directed Karl the Butcher vs. Axe (2010), a comedy featuring the same killer. Violent Shit: The Movie (2015) was an Italian film made as homage to the series.