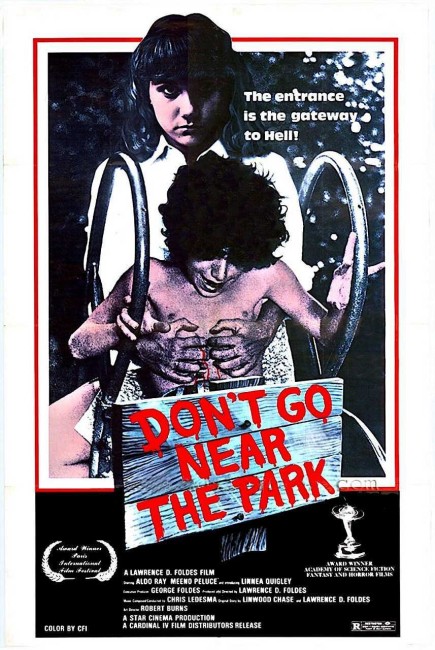 12,000 years ago, two primitives, Tra and Ga, were condemned by the matriarch of their tribe for killing a child. They were cursed to stay alive forever, aging rapidly unless they devour human intestines in order to rejuvenate. They were fated to be like this until the stars come back into alignment in 12,000 years time whereupon they must sacrifice a pure virgin who is born of their seed in order to gain their freedom. Sixteen years ago, Gar, now calling himself Mark, followed a young girl home, rented a room from her and then seduced and married her. This was all so that she can bear him a daughter whom he names Bondi. He raises Bondi with the intention of sacrificing her. On her sixteenth birthday, Bondi runs away from home. She takes refuge in Griffith Park, along with two other runaways, Cowboy, a boy her own age from Texas, and young Nick. There is also the aged Tra who dons a mask to scare people away in order to maintain the myth that the park is haunted.

Don’t Go Near the Park is an exploitation film from the 1970s. It failed to attain much interest when it came out but has gained a reputation since, particularly after being placed on the British censor’s video nasties list. The film existed in bootleg and cut video versions for many years up until the exhaustively thorough Dark Sky Films dvd release in 2006, which is reviewed here. Don’t Go Near the Park was made by Lawrence D. Foldes, a director/producer who was only nineteen years old at the time. Foldes had previously produced the teen film Malibu High (1978) and made his directorial debut with the low-budget action film The Great Skycopter Rescue (1978). Foldes went onto make other works like the vigilante film Young Warriors (1983), the absurd Linda Blair action film Nightforce (1987), the teen film Social Suicides (1991) and the drama Finding Home (2003). None of these others fall into genre material or are particularly well known.

Don’t Go Near the Park belongs to an era of exploitation films that is almost entirely dead and forgotten today. On the audio commentary, Lawrence D. Foldes says that he asked distributors to see what type of film was popular at the time and was told horror films. As such, Don’t Go Near the Park feels like it has been put together from a study of the other horror hits around at the time. Almost certainly, Foldes borrowed his scenes of the immortals tearing open and devouring their victims’ intestines from the gory gut-munchings in George Romero’s Dawn of the Dead (1978). The title falls into the fad for ‘Don’t – ‘ films that we had in the late 1970s, which was probably inspired by the success of Nicolas Roeg’s arthouse hit Don’t Look Now (1973) – others in this mini-trend included Don’t Be Afraid of the Dark (tv, 1973), Don’t Look in the Basement (1973), Don’t Open the Door (1975), Don’t Go in the House (1979), Don’t Answer the Phone! (1980), Don’t Go in the Woods (1982) and Don’t Go to Sleep (tv, 1982).

Despite its cult appeal, Don’t Go Near the Park is a dull film. The splatter effects only appear intermittently and the rest of the time the film has a slow pace, which is not exactly helped by a monotonous score. The main problem is that the film starts off promisingly as a piece about immortals needing to devour intestines to remain young and a girl being raised to be sacrificed in an occult ritual. Here Don’t Go Near the Park reasonably effectively starts to move towards another 1970s exploitation trend – the fad for occult and Devil Worship films that came out following Rosemary’s Baby (1968), The Exorcist (1973) et al.

After about half-an-hour of screen time, the film diverts off onto a completely different plot track where Tamara Taylor runs away from home and joins fellow runaways in an abandoned house in the park. Here the film stops becoming an occult/gore film and slows right down to become what feels like a domestic drama with Tamara Taylor and Chris Riley acting as substitute parents to young Meeno Peluce with bemasked and aged Barbara Monker lurking around in the background just like she was the senile grandmother. Crackers Phinn’s sinister father drops out of the film until the end and you sit wondering for some length of time what happened to the initial horror film we started out with – the only horror that we have during these scenes is Barbara Monker’s occasional sinister lurkings, one intestine devouring attack by Monker and Aldo Ray’s talk of the park supposedly being haunted. (Interestingly, Lawrence D. Foldes says that the idea for Don’t Go Near the Park was inspired by an unusual number of real-life disappearances of young people in the vicinity of L.A.’s Griffith Park – where some of the film is shot – from the 19th Century onwards).

Aside from the odd gut-munching gore scene, the only things that make Don’t Go Near the Park watchable are its bad movie moments. There are a number of low-budget filmmaking gaffes – it is not a promising sign when the opening title card comes with typos: “… it is a fact that the quest for Eternal youth, life and knowledge has been persistant [sic] since the days of primitive cannibalistic tribes.” Elsewhere, a rope can be visibly seen dragging the van over the side of bridge before it explodes. The old age wigs and makeup are none too convincing. The corpse whose intestines Crackers Phinn devours by the river bank in the opening few minutes can be seen blinking several times. The opening and flashback scenes with the primitives in a cave look like no more than the actors running around in some back corner California canyon in unconvincing costumes and makeups, while the intercut shots of supposedly wild animals look like leftover footage from the scene where Crackers Phinn takes the young Bondi to the zoo.

One of the funniest parts of the film is where Crackers Phinn follows Linnea Quigley home from a street carnival, walks in on her just as she gets out of the shower, telling her that the door was open and then, while she is still dressed in a towel, decides that he will rent her spare room and disappears into the room and closes the door on her while she stands there asking about money. The sequence is amusing for its lack of resemblance to what any normal human being might do in the situation – like Linnea screaming blue murder about an intruder being in the house, demanding to see some rent money for the room or threatening to get the police to throw him out.

Foldes arrives at an ending that entertains for its thoroughly bizarre lack of any sense – Crackers Phinn returns to the park and tries to molest daughter Tamara Taylor in a cave; Barbara Monker comes and she and Phinn fight over he having his way with Tamara vs the grand goal of bringing their millennia of immortality to an end; in anger, he starts shooting ray beams out of his eyes; Tamara Taylor eats the medallion her father has given her and (in an effective lap dissolve) transforms into the old woman that cursed them at the start and starts pronouncing against disruption of the Balance of Nature; various zombies, which are presumably the victims that have had their youth consumed, rise from the dead and devour Phinn and Monker’s intestines.

There is an epilogue where the three runaways walk off together, seemingly now the ideal family, and go to a playground only for Tamara Taylor to go to push Meeno Peluce down a slide and then dig her fingers into his stomach just like the two primitives did to their victims, whereupon the camera freezes on her as she turns and gives a sinister smile. It is somewhat of a false twist ending – and one that is borrowed in no small part from the final shot in The Omen (1976) – that feels like a cliche that comes without anything in the script up to that point having been done to establish it.

The majority of the cast it must be said act professionally. B movie veteran Aldo Ray provides a solid trooper, while young Meeno Peluce provides a great deal of natural energy in his role. The best performance in the film comes from young Tamara Taylor who plays with a genuinely natural sweetness and innocence. (Tamara Taylor also appears uncreditedly under makeup in the role of the Old Mother who condemns the two in the prologue 12,000 years ago). The most bizarre performance comes from Crackers Phinn who seems to deliver his role in a series of intense sinister stares. The film is also notable for featuring a nineteen-year-old Linnea Quigley, later of B movie Scream Queen fame, in what was her fourth credited and first substantial acting role.

In the audio commentary, Lawrence D. Foldes tells how Don’t Go Near the Park was shot non-union and so many of the actors chose to take pseudonyms, most obviously the bizarrely monikered Crackers Phinn. Most intriguingly, Foldes claims that Barbara Monker, who plays Crackers Phinn’s fellow primitive, was in fact Barbara Bain of Mission: Impossible (1966-73) and Space: 1999 (1975-7) fame (although a close examination of Monker’s face throughout the film leaves one quite certain that the two actresses do not look alike and that Foldes must surely be mistaken in his claim).