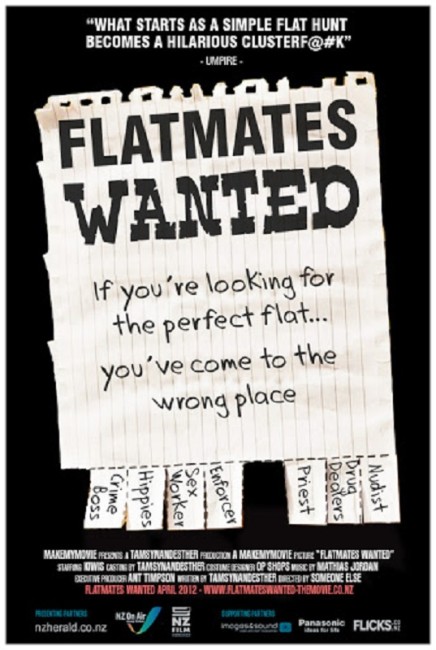 Luke wakes up alone in his flat after a troubling dream. Someone has painted the phrase ‘See You in Hell’ on the wall and his three flatmates are nowhere to be found. As Luke relaxes in his newfound freedom, he is threatened by a man who is looking for two of the other flatmates and visited by an annoying friend Nick. As Luke ventures outside, elements from his dream replay themselves. He is drawn to a sinister old house in the neighbourhood and finds that clues to his flatmates’ disappearance may have been left on a camcorder.

Flatmates Wanted was a no-budget, debut feature from Wellington, New Zealand-based director Gary Davies. Davies and producer Mike Hohaia claim to have made the film for a budget of $1500 and “approximately 217 favours.” This is a fairly remarkable figure – Robert Rodriguez, for instance, claimed to have made El Mariachi (1993) for $7000 (and that was before post-production costs), while Kevin Smith’s zero-budget debut feature Clerks. (1994) cost some $27,000.

In this job, I tend to get sent quite a few shot-on-video, zero-budget debut features to review by people hoping to break into the industry. The majority of these are amateurish and poorly made. Having said that, Flatmates Wanted would have to be one of the best zero-budget debut films I have sat down to see. It is a film that is easily comparable in the immense assurance of style on display with the aforementioned El Mariachi and Clerks. or, even closer to home, to Peter Jackson’s own zero budget debut feature Bad Taste (1988). That it has been made on such limited resources is a considerable miracle.

The first half of Flatmates Wanted has the rather witty feeling of being inside the mind of someone woken up the morning after a party with a hangover. The whole first half keeps blurring in and out of a weird dream state and comes filled with moments of bizarre humour. It has the sublime sense of a lazy, half-stoned Saturday afternoon in a student flat. Having spent a fair amount of time hanging out around and living in student flats in my day, I found myself laughing out loud during these scenes, so much does Gary Davies have his finger exactly on life in a student flat – be it the piled dishes in the sink that nobody can be bothered to clean to the messy detritus of a flatmate’s room, or the sheer slackerdom of walking through the lounge in the middle of the afternoon to find people in their pyjamas drinking and smoking bongs or playing guitar.

The second half leaves behind the surreal hangover haze to segue into something genuinely spooky. There is the undeniable influence of The Blair Witch Project (1999) on the film (clearly signalled by a Blair Witch poster hanging on the wall in the flat). Many of these scenes are shot on handheld video camera and come with the same suggestion there was in Blair Witch of something of dread chill lurking beyond the edge of the frame. Gary Davies does a superb job during the scenes venturing up into the attic and down into the cellar, where we also move from colour to black-and-white and infra-red shot camerawork. The eeriness and the jolts that come during these scenes, especially the pop-up appearances of a girl dressed in Goth makeup, are quite unearthly. The film is boosted by some excellent sound editing – the whole film is alive during these scenes with ghostly atmospherics, subliminal throbbing and humming effects and abrupt jumps, as well as the central character’s voice coming over in multiple tracks talking with himself and sometimes pulling away to make observations of striking clarity. The assurance and skill of atmosphere that comes during the latter half is far better than in any other A-budget horror film that I have seen this year.