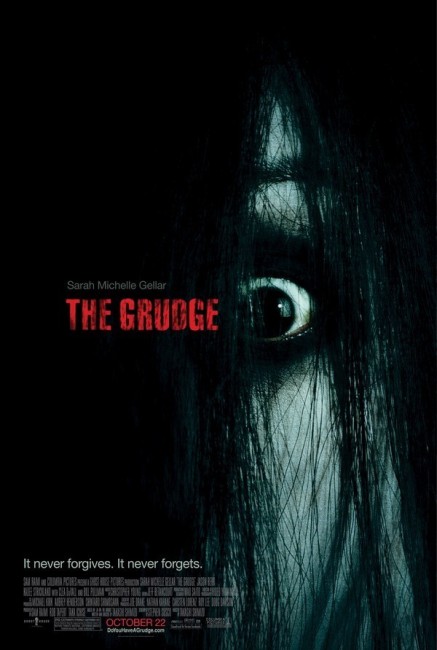 Karen Davis is an American student studying in Tokyo. The care centre where she volunteers gives her a job tending an aging bedridden American woman after the previous Japanese volunteer has disappeared. Karen arrives at the house to find the elderly woman in a terrified state and a mysterious boy Toshio locked in a cupboard. Later, police are called to the house and find the woman dead and Karen huddled in fear. Earlier, Matthew Williams and his wife Jennifer had rented the house but each in turn had been shocked by the appearance of the young boy and a mysterious woman and had subsequently vanished. The same ghostly duo move on to haunt Matthew’s sister and the head of the care centre. Karen and the investigating detective look into the house’s past and discover the deaths of the family who previously lived there and how these are connected to the suicide of an American professor.

Japanese horror is where it was all happening in the 00s. It is not unakin to the late 1950s/early 1960s where the sudden meteoric success of Hammer Films on the world stage created an entire English horror movement. The interest in Japanese horror (or J-horror) began with the hugely successful Ring (1998), which was followed by a host of sequels and imitators. Takashi Shimizu’s Ju-on films were clearly an attempt to copy the success of Ring. These began with the video-released Ju-on (2000) and Ju-on 2 (2000). Shimizu then made Ju-on: The Grudge (2003), a theatrically released sequel that essentially reworked the previous two films. Ju-on: The Grudge has a genuinely haunted atmosphere that make it one of the better Ring copies. It was followed by Ju-on: The Grudge 2 (2003), as well as two films from other directors with Ju-on: Girl in Black (2009) and Ju-on: Old Lady in White (2009). There was also a subsequent reboot film with Ju-on: The Beginning of the End (2014), which produced a sequel with Ju-on: The Final Curse (2015), followed by Sadako vs Kayako (2016), a crossover with the Ring series, and the tv series Ju-on: The Curse (2020- ).

The Grudge comes produced by no less than Sam Raimi, the director of films like The Evil Dead (1981) and Spider-Man (2002). Raimi and his co-producers have had the good sense to retain Takashi Shimizu, the director of the original – indeed Shimizu has directed and written all the other Ju-on films, which makes The Grudge no less than his fifth reworking of the same basic story. The script has been revised by newcomer Stephen Susco.

The Grudge follows Ju-on: The Grudge closely. Takashi Shimizu replicates all his shocks from the original – the frog croaks, the woman with the long hair crawling down the stairs, the unearthly black shadow hovering over the grandmother, the brother’s spooky appearance at the apartment door and the kid popping up everywhere – peeking through the rails on the stairs, seen through the door of an elevator, appearing under the sheets in a bed, even appearing out of the heroine’s hair in the shower. The film even replicates the sets of the house from the original and has the doomed Japanese family played by the same actors.

Of course, the story is now recast with American faces and the role of the nurse amplified to become a leading role for Sarah Michelle Gellar. This does give The Grudge the peculiarity of being set in Japan, yet featuring surprisingly few speaking parts from the Japanese actors. On the plus side, Takashi Shimizu demonstrates a reasonable ability for directing across the language barrier and even turns his Americano-centric cast around to at times give the film a whole new level about gaijin feeling alienated in a foreign country.

The one good thing about the remake is that Stephen Susco’s script, while keeping closely to the original, also now makes it more clear what is happening. The Japanese Grudge kept flipping back and forward between past and present and different characters where it became confusing what was happening – it was hard to tell if this was due to basic confusions in the script or down to clumsy subtitling. Stephen Susco, in translating this to English language, unveils a complex story that is like a mandala cutting back and forward across time and between characters, each time in doing so parsing away another layer like a detective story to finally reveal the original cause of the grudge that is being re-enacted. Susco also adds an explanation for events that was either not present or clear in the original.

That said, The Grudge is also the lesser of the original. Takashi Shimizu’s atmospherics and eerie jumps certainly work well. The audiences in the theatre jumped a number of times, even if perhaps this author felt things lessened by the familiarity of seeing them all being conducted a second time. Certainly, The Grudge is an eerie and spooky film on its own terms but there is also a tameness to the shocks. The Grudge was notedly cut down from an R rating in order to be released with a PG-13 certificate in the USA. It feels like this has served to take an edge of many of the shocks that were there in the Japanese version – these certainly do not number as many as they did in the original and this version of the film fails to leave one with the feeling of having been through a genuine tension workout after leaving the theatre as Ju-on: The Grudge did.

Aside from the Ju-on/Grudge series, Takashi Shimizu has made Tomie: Rebirth (2001), an entry in another Japanese ghost story series; the exceedingly strange and unclassifiable Marebito (2004) about a man finding a vampire-like woman beneath the Tokyo subway; the ghost story Reincarnation (2005); an episode of the anthology Ten Nights of Dreams (2006); The Shock Labyrinth (2009); Rabbit Horror 3D (2011); the live-action version of Hayao Miyazaki’s Kiki’s Delivery Service (2014); the English-language airplane horror 7500 (2014); the ghost story A Rain Woman (2016); Innocent Curse (2017) about abducted children returned with a curse; Howling Village (2019) about a haunted village; Homunculus (2021), Suicide Forest Village (2021) and Oxhead Village (2022).