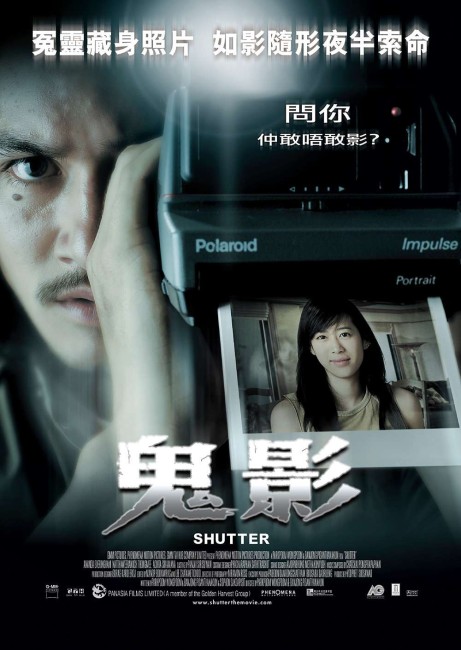 In Bangkok, the photographer Tun is being driven home from a party by his girlfriend Jane when she hits a girl on the road ahead. Tun urges Jane to drive on rather than stop or report it. In the aftermath, Tun begins to find mysterious smudges and figures appearing in the photos he takes. He and Jane believe they are being haunted and delve in to the phenomenon of ghost photography. Jane also discovers that the girl in the photos is the nerdy Natre that Tun was secretly involved with at university before she committed suicide.

In the early 2000s, the success of the Japanese ghost stories Ring (1998) and Ju-on: The Grudge (2003) spawned a large number of sequels, imitators and then eventually English-language remakes. The success was not just confined to Japan but spread right throughout the Asian region with imitators from South Korea, Thailand and Singapore. (For a greater overview see Asian Horror).

Thailand produced a modest output of these ghost stories. Shutter is one of these. Ring and Ju-on: The Grudge have an unmistakeable influence over it. Throughout all three films (and a great many of the other imitators) runs the recurrent image of the ghost girl with long hair hanging over her face appearing out of all manner of places. Where Shutter differs is that it starts out as a standard Supernatural Retribution tale where you are given the impression that Ananda Everingham and Nattheweeranuch Thongmee are being haunted for driving away from a hit and run incident only for the story to tangent off in mid-film and tie the avenging agency to Ananda’s past.

Directors Banjong Pisanthanakun and Parkpoom Wongpoom get off some highly effective jumps, like when the photo of the ghost girl in the developing tray turns and looks at Ananda Everingham. Or the subtly effective scene where Ananda is working in the darkroom and is joined by girlfriend Nattheweeranuch Thongmee who appears in the foreground before he exits the darkroom to answer the phone and it turns out to be Nattheweeranuch, leaving him with the uneasy question of just who or what was in the darkroom with him.

The various appearances of the ghost girl floating alongside the car, appearing in the back seat and crawling up the end of the bed all add up to quite an effectively haunted atmosphere. Even calmly understated shots like where Ananda Everingham is at his friend Tonn (Unnop Chanpaibool)’s apartment and we see Tonn in the background casually climbing up on the balcony and then jumping over.

Like many of the other films in this fad, Shutter also underwent an English-language remake with Shutter (2008) with Joshua Jackson and Rachael Taylor as the haunted photographer and his girlfriend. This often repeated directorial set-ups from the Thai version, although is considerably less effective than the original.

The directing duo of Banjong Pisanthanakun and Parkpoom Wongpoom went on to make another ghost story with Alone (2007), and episodes of the anthologies Phobia (2008) and Phobia 2 (2009). Pisanthanakun later went on to solo direct the N is for Nuptials episode of The ABCs of Death (2012) and a further horror film with Pee Mak (2013), as well as the non-genre romances Hello Stranger (2010) and One Day (2016). Wongpoom later solo directed the fantasy film Homestay (2018).