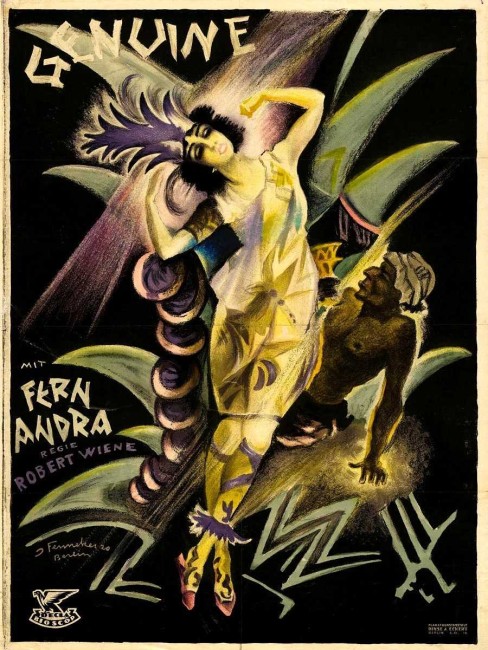 aka Genuine: The Tale of a Vampire

Percy becomes obsessed with a painting he has made of the alluring Genuine, the priestess of a savage tribe. As he falls asleep, Genuine comes to life. She is captured and sold in the slave market where she is purchased by Lord Melo who makes her a prisoner in his house. However, when Melo’s nephew Florian comes to visit, she bewitches him with her spell, making him slit his uncle’s throat with a razor and then demanding that he kill himself to prove his love for her.

German director Robert Wiene (1873-1938) made 49 films during his career that ran from 1913 until shortly before his death 25 years later. The one film he is most known for is The Cabinet of Dr Caligari (1919), which created a cinematic revolution with its surreal subjective depiction of a disturbed state of mind. Caligari is one of the few films where its distinctive uncanny style – all angular and distorted sets filled with giant exaggerated shadows – has been endlessly repeated by other filmmakers (something that has been labelled German Expressionism).

Wiene made a number of other classic works, notedly the Dostoevsky adaptation Raskolnikow (1923) but it is as a horror director he has been pegged. Many of his other films are either lost or there is not a great deal of information about them. That said, the only other genre works that Wiene produced were Genuine here and the excellent The Hands of Orlac (1924), which has been multiply remade in the sound era. Wiene fled to France after the Nazis banned his spy film Police Act 909 (1933) and made only one film there before his death in 1938.

Genuine was made when Robert Wiene was coasting on the acclaim of The Cabinet of Dr Caligari. It is decidedly the lesser work and failed to garner critical acclaim back in its day, nor has it ever subsequently been rediscovered and hailed as an unsung masterpiece by film historians. It essentially revealed Wiene as a one trick pony. Thematically, Genuine is a very different film to Caligari – it could easily play out as a regular film without any fantastic elements and it is only Wiene’s re-use of the same contorted sets and lighting schemes that edges it over into being fantastic.

It also opens with what would seem to be a dream sequence where the figure (painting?) of Genuine mounted in the wall comes to life, which is not dissimilar to the All a Dream Ending in Caligari. However, there is never the same distinctive sense of existing inside a disturbed psychological space that we had in Caligari. Rather what we have is a strange drama about a femme fatale that happens to take place amid some extravagantly weird sets and costumes. Crucially, there is not the same creepy, crepuscular effect that Caligari exerted.

The version seen here and in English-language release (where it was packaged as an extra for a dvd release of The Cabinet of Dr Caligari) only runs to 44 minutes long. This is half of the film’s original length and leads to some frustration as one is trying to piece the story together from what is clearly an incomplete film. For a reasonable amount of the running time, it is often hard to work out what is going on or why things are happening.

What also adds to the confusion is the subtitle in some English language versions The Tale of a Vampire, leading to the reasonable expectation that we are going to be watching a vampire film. It is crucial to remember that the vampire film didn’t even exist back in 1920 – there are some obscure antecedents but it did not begin until a couple of years later with Nosferatu (1922), while the figure of the vampire we understand today did not take off until the Bela Lugosi Dracula (1931) over a decade on from this.

The far greater meaning that vampire had back in 1920 was as a vamp, meaning a predatory woman or femme fatale, which is exactly the use it is being put to in Genuine. You get the impression after watching enough German Expressionism that women were regarded as a mysterious species and dangerous when their sexual wiles were unleashed – see films like Metropolis (1927) where Maria swings between saintly and angelic or a seductress who can destroy all of society, or the fascination that exists in the multiple versions of Alraune – Alraune (1918), Alraune (1928), Alraune/Daughter of Evil (1930) – with the idea of a woman born artificially thus without a soul who callously used and discards men.

Still, the designs that Robert Wiene offer up hold an undeniable visual fascination. There are all the stark, angular (and clearly painted) sets and figures moving about casting giant exaggerated shadows on walls that we had in Caligari. There are other bizarre touches like a laboratory adorned by strange items such as a skeleton with a clock for a head, or servants that wear giant turbans nearly three feet tall. Fern Andra is outfitted in a series of wildly over-the-top outfits – just about a new one for every scene she is in – all of which seem to include some type of massive hair ornamentation, including feathers nearly half the size that she is.