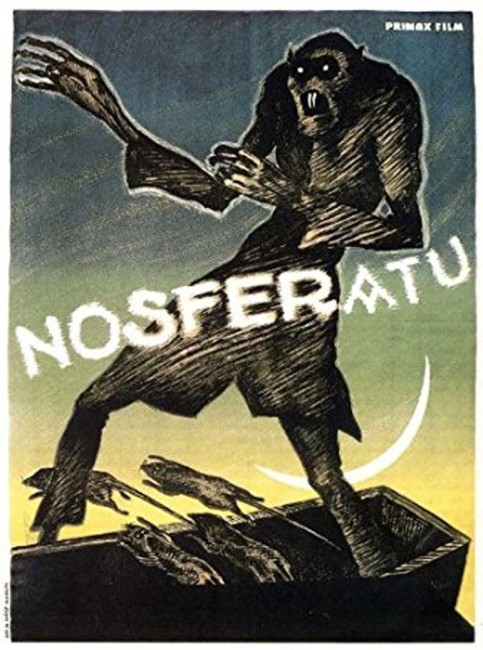 aka Nosferatu: a Symphony of Terror; The Twelfth Hour

1838 in the peaceful German town of Bremen. Real-estate agent Johannes Hutter is asked to travel to Transylvania to sell a property to Count Graf Orlok. Leaving his wife Ellen, Johannes travels through the haunted Carpathian mountains to the castle of the rat-like Orlok. Once there, Orlok makes Johannes his prisoner and drinks his blood. As Orlok departs for Bremen aboard the ship Demeter, Johannes tries to make an escape and return to save Ellen before she falls under Orlok’s influence and the town is overcome by his plague.

Nosferatu is possibly the most amazing of all vampire films. This is so for several reasons. It is not simply because Nosferatu was the very first vampire film. Nor is it because it survives today despite a lawsuit by Bram Stoker’s widow over its uncredited and outright theft of the plot of Dracula (1897), a suit that ended with an order for all prints of the film to be destroyed. (Luckily for us they weren’t). Nosferatu amazes most of all because it was – at least until Francis Ford Coppola’s Bram Stoker’s Dracula (1992) – the most cinematic of all vampire films.

Nosferatu is a surprisingly faithful adaptation of Dracula (or at least of the first quarter of Dracula). Unlike any other adaptation of the novel, more than two-thirds of the story is taken up by the journey to Transylvania. It is the way that director F.W. Murnau launches into the story that takes one’s breath away. The horrors in the book are about something emerging from the repressions of British rationalism. On the other hand, F.W. Murnau creates a film that gives the sense that it has wholly abandoned rationalism and entered into the world of a dark, inverted fairytale.

Murnau drops some of Bram Stoker’s wilder visions from the Transylvania section – Jonathan’s seduction by Dracula’s wives, the image of Dracula crawling down the wall – but his own images are remarkable and his Transylvanian sequences have a far more eerie sense of the otherworldly than Stoker achieved. There is the visit to an inn whose inhabitants are steeped in peasant superstition, while outside a prowling wolf scares horses away. When the coach drops Johannes at the bridge, the driver eerily warns “beyond lies the Land of Phantoms”. The sense of crossing the bridge has the feeling of leaving one world for another, a fact confirmed moments later by the appearance of the black coach where even the rider and horse come swaddled in black.

The most striking feature of Nosferatu is Dracula/Orlok, played by Max Schreck in a fascinatingly crepuscular performance – made up with a rat-like face with bald head, protruding ears, exaggerated eyebrows, two protruding front teeth and a spindly gait where Schreck wears a long black mandarin coat and keeps his arms and long fingernails hunched in front of him by his side. F.W. Murnau accompanies Max Schreck’s appearance with a wild bag of fantastic tricks – doors opening of their own accord, ownerless shadows creeping up stairways and opening doors, the intensely weird image of Schreck rising from his coffin straight as a board and creepy title cards like [in reference to a miniature of Ellen]: “Is this your wife? What a pretty throat.”

Classically, Bram Stoker associated the vampire with a sense of sexual repression that lurked beneath the outward manneredness of Victorian propriety. In Nosferatu, the imagery focuses on death rather than seduction. Dracula/Orlok appears surrounded by rats and even looks like one himself, while his arrival in Bremen is as though he were the Black Plague. The nearest Nosferatu gets to Stoker’s metaphors is the contrast made between the dark blight that Dracula represents and the peaceful innocence of Bremen and Ellen/Mina – but this harkens more back to a purer, more fairy-tale like form of seduction. The film is richly aswim in metaphors – contrasts between Renfield and a Venus Flytrap; between a polyp and Orlok: “transparent, without substance, almost a phantom.” F.W. Murnau achieves much through striking crosscuts – between the earlier scenes with Johannes as Orlok’s victim and Ellen sleepwalking and between Orlok’s voyage aboard the Demeter, between Johannes’s return home and the waiting Ellen and the imprisoned Knock. The ending where Ellen traps Orlok by her bedside, allowing him to feed on her throat until he forgets the coming of daylight and fades away with the sunrise, is nothing short of visually stunning.

The version of the film seen here is the 1992 print, which annoyingly drops the new names given the characters over the book and renames them after their counterparts in Dracula – Dracula, Harker, Van Helsing and so on. However, it then has the ineptitude to misspell half of them anyway – Jonathon Harker, who now has a wife Nina instead of Mina.

Nosferatu was remade by Werner Herzog as the interesting Nosferatu the Vampyre (1979), starring Klaus Kinski as Orlok, who was now legitimately able to be called Dracula because Stoker’s Dracula was out of copyright. Over the years, much mythology has built up around the film, most notably the (untrue) claim that Max Schreck (whose surname means ‘fright’ in German) was a mysterious figure about whom nothing is known and who never appeared in any other films again. In fact, Schreck is reasonably well-biographed and appeared in at least a dozen other films. This myth led to the basis of the film Shadow of the Vampire (2000), which is set around the making of Nosferatu and posits that Max Schreck (played by Willem Dafoe) was a real vampire. While a work of total fiction, this is nevertheless an excellent film in its own right.

Both Shreck (1990) and Son of Darkness: To Die For II (1991) are vampire films that names their vampire Max Schreck. Batman Returns (1992) and Final Destination (2000) respectively feature a villain and an FBI agent named Max Schreck; while in Targets (1968), Boris Karloff plays an aging horror actor named Byron Orlock; and the vampire films Transylvania Twist (1989), The Breed (2001) and Dracula 3000 (2004) feature vampires named Orlock. The rat-like look of the vampire has been used in several other films such as Salem’s Lot (1979), Vamp (1986), Black Water Vampire (2014) and What We Do in the Shadows (2014). Waxwork II: Lost in Time (1992) contains a brief homage to Nosferatu, while he also makes a background cameo in The Haunted World of El Superbeasto (2009). Nosferatu was edited with bad movie footage and a comedy soundtrack in Nosferatu vs Father Pipecock & Sister Funk (2014), while Mimesis: Nosferatu (2018) is set among a present-day recreation.

F.W. (Friedrich Wilhelm) Murnau made several other horror films in Germany including Der Januskopf (1920), a lost adaptation of Dr Jekyll and Mr Hyde; the old dark house film The Haunted Castle (1921); and the fabulous Faust (1926). Murnau next emigrated to the US where he made Sunrise: A Song of Two Humans (1927), which is considered one of the greatest of all silent films.