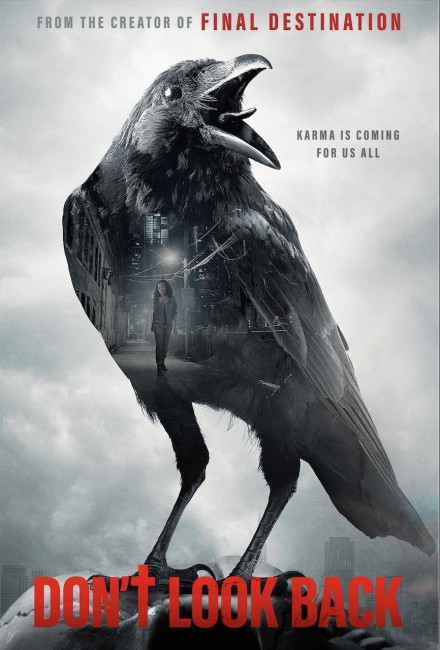 aka Don’t Look Back

Caitlin Kramer is recovering from an incident in which masked men burst into her home and shot her and her father, killing her father. She is jogging in Bristol Park when she sees an assailant attack and brutally beat a man to death. Several people stand by watching and she is the only one motivated to make a 911 call. In the aftermath, a video taken of the incident by one of the bystanders is aired on the news and there is public condemnation of those who stood by and did nothing. Caitlin is outside the apartment of the man who shot the video when she sees him fall to his death. She can see a hooded figure inside the apartment. The victim’s brother Lucas Helton is so outraged by the people who stood by and did nothing that he names them on tv. As the other bystanders then start to be killed, Caitlin cannot be sure if the agency enacting vengeance is human or supernatural.

Good Samaritan/Don’t Look Back was a directorial debut for Jeffrey Reddick. Reddick has been a long-time horror fan. His bio claims that he wrote a prequel to A Nightmare on Elm Street (1984) at age fourteen and sent it to the CEO of New Line Cinema who rejected it. Reddick persisted and was eventually taken on for an internship at New Line. I’m going to call a “yeah maybe” on that one. Reddick was born in 1969 and is either mistaken about how old he was – A Nightmare on Elm Street didn’t premiere until November 1984 when Reddick could have only been fifteen at the very youngest when he saw the film (not including time to actually write a script). To me it sounds a claim on the order of Steven Spielberg’s insistence that he obtained his career breaks by walking into the Universal Studios lot and simply occupying an empty office or Christopher Lee’s claims about his war record.

Whatever the case, Reddick did work for New Line Cinema who eventually produced his script for Final Destination (2000), which became the basis of a popular franchise. Reddick has also written other horror films such as Return to the Cabin by the Lake (2001), Tamara (2005), Day of the Dead (2008) and Dead Awake (2016). Reddick had previously made the basics of the film here with the 12-minute short Good Samaritan (2014), some footage of which appears to have been recycled in the full-length film.

Good Samaritan/Don’t Look Back feels like Reddick conducting a rehash of Final Destination – a group of random strangers experience a violent incident and afterwards are killed by something seemingly supernatural. That and maybe a mobile phone-era version of the Kitty Genovese story. In 1964 in New York City, Kitty Genovese was raped and stabbed to death while loudly screaming for help. Two weeks later, The New York Times published an article claiming that 37 people had heard or seen the attack and did nothing. In recent years, this figure was shown to have been wildly exaggerated by the editor where, while there was some witnesses, none stood by and did nothing and most thought they heard something else. The article however created great outage and directly led to New York installing the 911 phone number system.

Good Samaritan/Don’t Look Back builds on the same moral outrage. Reddick has spun the idea of the Kitty Genovese story – of bystanders who stand by and do nothing during a violent attack – into the era of the mobile devices – of people who stand by and witness an attack while doing nothing, even those who film the incident and upload the video to a news site. While there are undoubtedly examples of this happening, Good Samaritan/Don’t Look Back wields straw moral outrage about the situation. You sort of can’t help but have some sympathy for the people who do nothing – I think, for instance, if I saw someone being attacked that my first hesitation would be for my own safety as someone with health issues wading into the midst of a fight and I expect many others would have similar issues. Not that that would stop me calling 911 but the film seems to consider Kourtney Bell who did call 911 as worthy of equal condemnation as these others.

Beyond that, Good Samaritan/Don’t Look Back becomes a film lacking any basic plausibility. There seems zero conviction to the performances, the characters feel detached from regular human behaviour, while the dialogue emerges from the actors’ mouths with all the flow of oversized rocks. One of the more ridiculous scenes is where the dead man’s brother (Will Stout) goes on tv and basically doxes everybody who was a bystander. Any tv news show would either not allow such a statement to go out live or else would pull it for privacy reasons (ie. fear of being sued). This results in ridiculous things like people instantly recognising Kourtney Bell in the street (despite her name only having been mentioned) and spitting at her. There also seems a suspicious lack of internet-centred outrage about the incident.

Even Jeffrey Reddick’s attempts to generate suspense end up in ridiculous jumps – like where Kourtney Bell watches the funeral on tv as Will Stout abruptly leaps out of the screen at her. The capping is the ridiculous double ending where [PLOT SPOILERS] the supernatural retribution is no more than the brother on a revenge killing spree against people for failing to do anything, before a double twist ending revealing there is a supernatural agency after all.