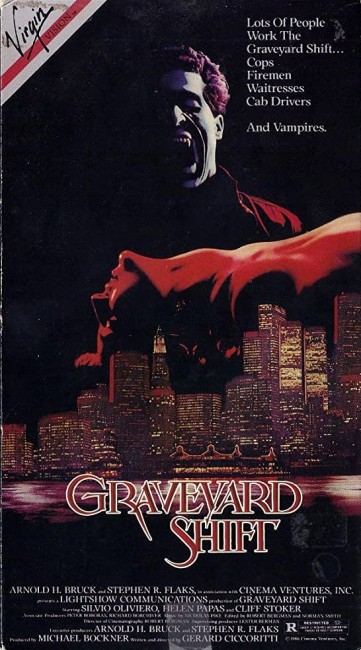 Music video director Michelle Hayden is diagnosed with a terminal illness. She then meets and is drawn to vampire taxi driver Stephen Tsepes. He too is attracted to her melancholy and helps her find meaning to life again as the two become lovers.

Graveyard Shift was part of the wave of punk-New Wave vampire films that started to come out in the 1980s, an era that finally showed the vampire having confidently adjusted to the modern world.

Graveyard Shift is an interesting film that doesn’t always work. There are good individual images in it – the vampire woman locked in a jail cell reduced to drinking from her own veins; the world-weary vampire who begs to be killed, even baring and offering his chest to the vampire hunters; and the relationship between the two principals, which briefly suggests a careworn sincerity.

On the other hand, the plot roams everywhere, throwing in a record-number of underdeveloped subplots – Sugar Bouche is introduced as a vampire stripper but is forgotten about halfway through; we never find out the fate of first victim Kim Cayer; and there is vampire cop Lesley Kelly about whom nothing is ever explained. There is even one sequence with a blonde slashing the throat of a victim in a pool has no connection to anything else whatsoever. There are also a great many gratuitous sex scenes. There is a good idea at the core of the film but the central narrative needed to be strengthened far more so than it is.

Director Gerard Ciccoritti and star Silvio Oliviero returned with a sequel The Understudy: Graveyard Shift II (1988), which featured a vampire haunting the set of a vampire movie.