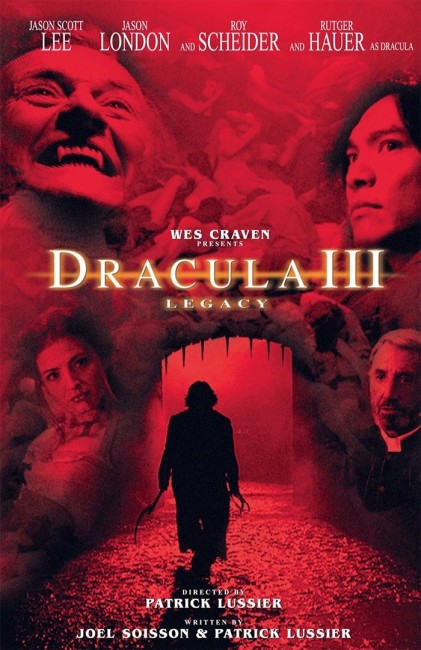 The near future. When The Vatican tries to put a stop Father Uffizi’s hunt for vampires, he quits the cloth. He and Luke head to Romania, which is now a war zone under the aegis of UN peacekeepers. Uffizi is on a single-minded mission to find and kill Dracula. They pass through rebel territory, joined along the way by EBC news journalist Julia Hughes. There they discover that the rebels are fighting vampires, along with human procurers that are capturing people as food for the vampires.

This was the third and last of the films in the series that began with Dracula 2000 (2000) from director Patrick Lussier and writer/producer Joel Soisson. The first film, which received a theatrical release, featured Dracula in the person of Gerard Butler being resurrected in present-day New Orleans. Via his Neo Art & Logic production company, Soisson with Lussier again directing mounted two cheaper video-released sequels, both shot back-to-back, with Dracula II: Ascension (2003) and Dracula III: Legacy here. Both of the sequels feature Jason Scott Lee as the vampire hunting priest Father Uffizi.

Dracula II: Ascension had an interesting script that delved into a scientific explanation for vampirism but suffered from a so-so-budget that resulted in an uneven film. Dracula III: Legacy continues on from that, although drops the medical vampire angle. It is much more of a vampire action film with Jason Scott Lee and Jason London, both returning from the previous film, now recast as a vampire hunting duo.

The interesting new scenario has them travelling across Eastern Europe to Castle Dracula where Lee intends to kill Dracula. This sort of follows the last half of Bram Stoker’s Dracula (1897), albeit having been updated to an interesting near-future setting where Romania is a rebel-divided war zone mandated by UN peacekeepers where as we progress behind rebel lines we amusingly find that what the rebels are actually fighting is a vampire infestation.

Patrick Lussier places the emphasis on the action element more so than he did in the previous film. The vampire action film was being kicked into high gear around the same time in more high-profile films like Blade (1998), Underworld (2003) and sequels to either – by contrast, this is more B-budgeted. There are assorted scenes with Jason Scott Lee in action wielding his bullwhip against vampires. There is one outlandish scene where Lee is cornered in an alleyway by vampire on stilts, being attacked first by a vampire woman who scuttles out between the stiltwalker’s legs whom Lee proceeds to cut in half even as her severed torso comes on towards him, before the stiltwalker is despatched when the stilt snaps in a grate, falls and he is impaled through the heart.

The film also introduces Dracula in the form of Rutger Hauer. This is a very different Dracula than the one played by Gerard Butler in Dracula 2000 and Stephen Billington who was listed as Dracula II in the previous film. Hauer is listed as Dracula III here. Despite calling themselves sequels by their very titles, the films never offer any adequate explanation of why there are so many different and seemingly contradictory versions of Dracula running around.