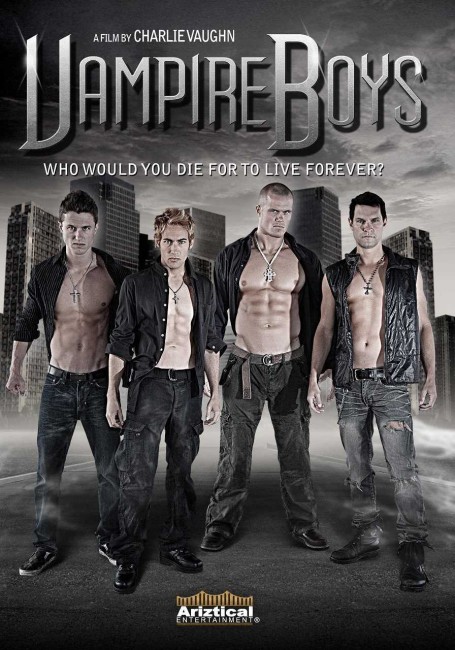 Jasin is a vampire who is nearing one hundred years old. If he does not find true love before then, he and the brood of vampires he has sired will die. Caleb Donovan has just moved to Los Angeles from Ohio. He has accepted the offer of staying with Paul, another gay guy he has befriended over the internet. Caleb soon attracts the attention of Jasin who announces to his brood that Caleb will be The Chosen One. The two begin a relationship but Caleb is disbelieving when Jasin tells him that he is a vampire. They then face a threat from members of Jasin’s brood who insist that Caleb is not his true love.

Vampire Boys is a gay vampire movie. The lesbian vampire film had been with us ever since The Vampire Lovers (1970) but it took some time for filmmakers to get used to the gay male vampire. Certainly, the gay vampire was being played as a joke as long ago as The Fearless Vampire Killers (1967) and fairly much became its own niche with the works of Anne Rice. But the first full-fledged gay vampire film did not appear until Scab (2005). Around the same time as Vampire Boys, there were a host of other efforts such as Eulogy for a Vampire (2009), Bite Marks (2011), Vampires: Brighter in Darkness (2011), The Brides of Sodom (2013) and David DeCoteau’s 1313: Boy Crazies (2011).

Vampire Boys is fairly much a gay version of Twilight (2008). There’s the same essential plot of a young Mary Sue character who has nothing going for him other than that he looks boyish and feminine and of a vampire patriarch who fixates on him as his true love. The plot contorts around various things – Jason Lockhart agonising over telling cute boy love Christian Ferrer that he is a vampire, the threat of the other vampires who don’t believe Christian is the Chosen One – but the end outcome is never in doubt. Jasin is said to be divided in his affections between Caleb and Tara but she is such a peripheral character and the film does nothing to engage with what is clearly Jasin’s bi side that there is no uncertainty about who he will choose. At least the vampires don’t sparkle, are actually seen attacking people and drinking blood, and there is none of Stephenie Meyer’s absurd posturing about no sex before marriage.

The plot is also fuelled by things there for the sole reason to drive the drama. The idea that Jasin has to find or at least declare true love on his 100th birthday is a plotting contrivance that exists for the sole reason of creating a deadline around which all the drama circulates. Ryan Adames as the housemate is a character who exists solely to drive the drama. (I do have some problem with the way the vampire posse eliminate Adames as a rival – I would be annoyed as hell if some love of mine went and threatened (let alone bumped off) someone they saw as a rival to my affections. Indeed, it is surely has to be one the prime red flags that it is a toxic relationship. Not to mention, is it really a secret you want to keep from your true love?).

From its first scene, Vampire Boys resembles one of the softcore films of gay horror director David DeCoteau – much of the film consists of a posse of vampire boys who spend more time with their shirts off than they do on as though such is normal wear. I’m not gay so parades of shirtless men don’t do much for me. At least, Charlie Vaughn is a somewhat better director than DeCoteau and has better actors to hand even if the pitch of the films are essentially the same.

The main issue I would have is that this is a film that could easily write vampires out of the equation and take place as just a regular gay romance. This seems to be jumping on board the Twilight fad and in doing so only further adds to the toothless weakening of the horror aspect of the vampire film that Twilight wrought and from which the genre has yet to recover. The horror content in the film is negligible.

Vampire Boys 2: The New Brood (2013) was a sequel, featuring the further adventures of Caleb and Jasin but cast with different actors and from a different director.

Vampire Boys is directed by Charlie Vaughn who also works as an actor. Vaughn has gone onto make a series of family films including 12 Dog Days of Christmas (2014), All Hallows Eve (2016) and Finding Fish (2017).