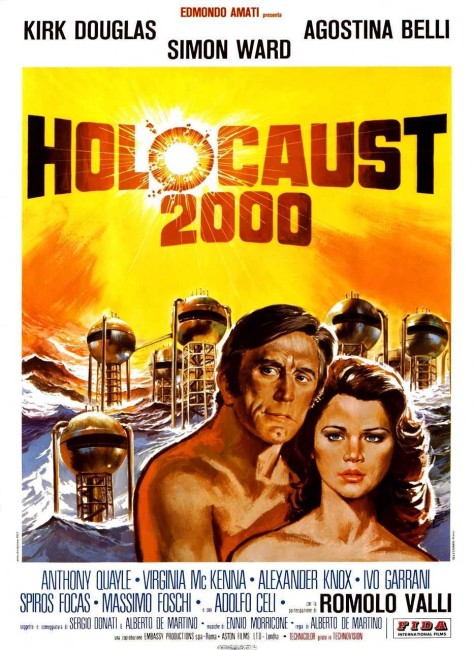 Millionaire industrialist Robert Caine is supervising the construction of a nuclear power plant in the Middle East. Strange things then begin to happen – the plant’s computer spouts symbols that a priest interprets as the name of the Anti-Christ. Caine realises that the plant has seven turbines, ten commutators and ten control systems that correspond to the seven heads, ten horns and ten crowns of the Beast prophesied by the Book of Revelations and that the plant he is building may be capable of triggering a chain reaction of nuclear explosions that would destroy the entire world. He also comes to realise that the child his girlfriend is pregnant with may be the Anti-Christ.

This Italian-made run through the End Times prophecy cliches seems like a potentially interesting collision between The Omen (1976) and the later The China Syndrome (1979). It is probably the best made and best budgeted of the Italian occult films of the 1970s – remember the likes of The Antichrist/The Tempter (1974), Beyond the Door (1974), The Night Child (1975), Naked Exorcism (1976), The Sexorcist (1977) – and even manages to import an A-list name like Kirk Douglas.

However, that is not saying much and Holocaust 2000 quickly jumps off into the cliches of the 1970s occult cycle – the pregnant woman’s baby as anti-Christ, symbolic interpretations of the Book of Revelations, conspiring power cabals. It gets very hysterical about the topic of nuclear power. Although for a film that is happy to equate nuclear power with the ultimate evil (the Devil), its railings on the subject seem woefully uninformed – claiming the ridiculous notion that the detonation of one nuclear power plant could set up a chain reaction of such explosions around the world and that such a detonation could destroy the world, something that even all the nuclear weaponry detonated all at once could not do.

Like both The Exorcist (1973) and The Omen, Holocaust 2000 is, despite the mask of religious pretensions, an exploitation film. Here is where it is at its most entertaining, with a lively series of Omen-esque deaths, the best of these being a beheading by helicopter blade. In an amazing dream sequence, the nuclear power plant, seen rising from the ocean, turns into a vision of the ten-headed Beast from the Book of Revelations.

The film also manages to more than effectively convey a horror of hospitals in the scene where an unwitting Agostina Belli is taken to an abortion clinic or where Kirk Douglas bound in a strait-jacket is trapped in a rubber-room filled with inmates who start kicking him to death. In the midst of the generally hysterical pandemonium, Kirk Douglas brings a convincing presence and calm that adds far more than the film deserves.

Alberto De Martino was a director in the Italian exploitation genre and covered most genres including the peplum and the giallo. His other genre films include:- Medusa Against the Son of Hercules (1962), the Gothic horror The Blancheville Monster (1963), The Triumph of Hercules (1964), the spy film OK Connery/Operation Kid Brother (1967), the giallo The Man with the Icy Eyes (1971), the possession film The Antichrist/The Tempter (1977), the superhero film The Pumaman (1980), the psychic film Blood Link (1982), Miami Golem (1985) and Formula for a Murder (1985).