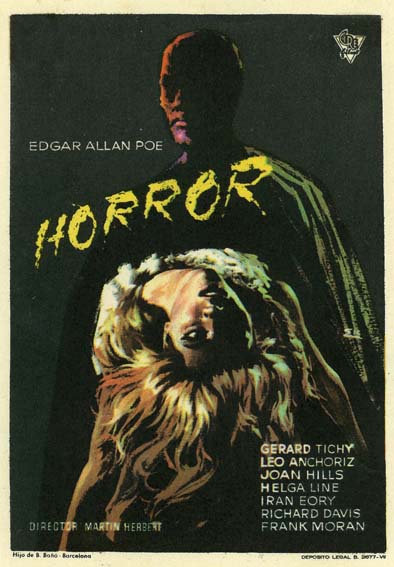 Northern France, 1884. Emilie de Bancheville returns home to the de Blancheville family castle a few days before her twenty-first birthday. Accompanying her are brother and sister John and Alice Taylor. Emilie finds that her brother Roderic has replaced all the servants and brought in the sinister Dr LaRouche. Roderic tells the others of the family curse that prophesies that Alice will bring the downfall of the de Blancheville line upon her twenty-first birthday. The deformed and burnt figure of their late father appears to Alice in her sleep, drawing her to join him in the family crypt. The others suspect that the sinister new housekeeper Miss Eleonore may be poisoning Alice or that Dr LaRouche is hypnotising her.

Continental Gothic is a term applied to films that emerged principally from Italy during the 1960s. The genre was kicked into high gear with Mario Bava’s Black Sunday (1960), which was the most influential work of the genre (although was not the first) and set the style. The films of the Continental Gothic cycle drew on the undeniable influence of Hammer Films and Roger Corman’s Edgar Allan Poe adaptations but created their own unique style shot in moody black-and-white, featuring supernatural retributions and resurrected witches in beautiful decaying castles and old houses. Many of the films also featured British actress Barbara Steele whose haunting wide-eyed beauty became an indispensable fixture of the genre.

The Blancheville Monster feels like B-budget Continental Gothic. It ticks most of the boxes for any film coming out during the cycle – a big decaying old family mansion and adjoining abbey; black-and-white photography with an emphasis on gloomy shadows; family secrets; a disfigured figure lurking around the grounds; a sinister doctor tinkering in hypnotism.

Alberto De Martino creates some great Gothic images – the hooded, burn-scarred figure of the father hovering over Ombretta Colli’s bed; Ombretta wandering through the grounds in a nightgown with candelabra and being drawn to the magnificent ruin of the abbey where the father invokes her to come inside and join him in death; dreams of her running through the woods in a wedding gown; even a scene that pays homage to Vampyr (1932) where she is buried alive and the camera looks up from the coffin as she lies trapped there while still alive.

On the other hand, Alberto De Martino shows he is not Mario Bava anywhere outside of these scenes where the film slows down and becomes prosaic and talky. The disappointment is that after such a great build-up, the film reaches an improbably contrived mundane ending involving murder plots and people hidden behind masks.

The film appears to be very loosely based on Edgar Allan Poe’s The Fall of the House of Usher (1839). Poe’s name does not appear anywhere on the credits, even though Poe was in huge vogue during the 1960s, following the success of Roger Corman’s The House of Usher (1960). There are however undeniable similarities between the two films – the brother Roderick/Rodrige; the big decaying family mansion; the sister who is buried while still alive. On the other hand, The Blancheville Monster adds a good deal more that is not in Poe – a sinister doctor who may be hypnotising the heroine; a Barbara Steele-like housekeeper (Helga Line) who may be poisoning Ombretta Colli; the hooded, disfigured father. Nor do we get anything about the crippling over-amplification of the senses with which Roderick Usher is traditionally afflicted.